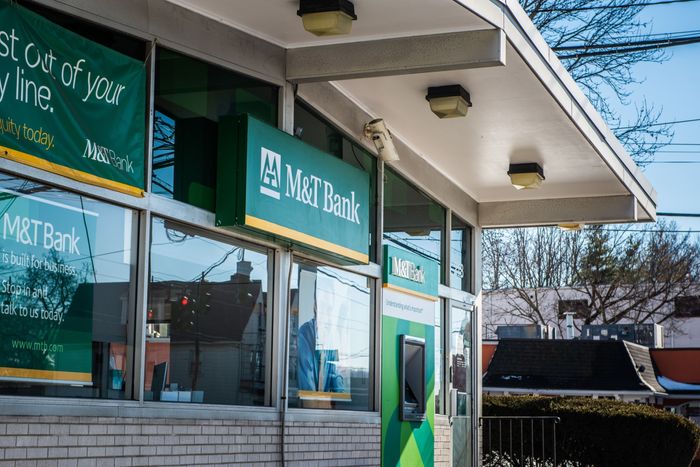 This year’s rally in bank stocks appears to have slowed to a sputter, but there’s still reason for investors to stick around: banks’ reliable dividends at a time when income investors lack compelling opportunities.

Just take a look at this past week’s gyrations in the bond market. The yield on the 10-year Treasury note dipped below 1.2%—its lowest level since mid-February. While that drop in yields also hurt bank stocks, with the

exchange-traded fund (ticker: KBE) falling 3.5% Monday, the yield on the ETF is 2.3%—offering investors both a steady payout and the chance for appreciation.

Looking to bank stocks as an income play makes sense in the current environment. Even though Treasury yields rebounded from their trough earlier in the week, there’s still little money to be made with the 10-year yielding 1.29% as of Friday morning. Some investors may be tempted to tap the high-yield market but yields aren’t great for the level of risk that is assumed. The

ETF (JNK) currently yields 4.6%, and even though corporations weathered the pandemic well, the historically low yields on noninvestment-grade companies may not justify the risks of default that accompany these bonds.

Enter banks. Not only did the sector emerge from the pandemic largely unscathed, but the largest banks also underwent three of the Federal Reserve’s stress tests in a 12-month window—one more than usual—to further prove their durability.

The last test, whose results were released in June, was of most interest to income investors. This is because passing the test meant that the Fed would ease pandemic-induced restrictions on capital distributions to shareholders. Last year, the Fed called on banks to temporarily halt stock buybacks and instructed them to cap dividend payouts to the average of their quarterly profits from the four preceding quarters. The idea was to force banks to conserve capital to serve clients struggling during the pandemic.

Were it not for the restrictions, several banks would have been able to maintain or even increase their payouts to investors last year, which is why so many of the biggest banks rushed to announce plans to boost their dividends soon after the results of the latest stress test.

(WFC), for instance, both doubled their dividends and yield 3% and 0.9%, respectively.

But with the rally of bank stocks in a holding pattern—the KBE had been up more than 32% and is now up around 16% for the year—it may make sense to do some stock picking among the regional banks, many of which offer yields in excess of 3%.

(CFG) is one such bank. It currently yields 3.5% but it has much more going for it. The bank, based in Providence, R.I., recently announced plans to acquire

East Coast retail operations, which will allow it to close some gaps in its branches in the Northeast and mid-Atlantic regions while gaining a small foothold in Florida.

And for now, acquisitions appear to be part of Citizen’s strategy, so long as the deals make sense, as the bank looks to remain competitive in an increasingly digitized industry.

Barron’s brings retirement planning and advice to you in a weekly wrap-up of our articles about preparing for life after work.

Banking “is an extremely dynamic industry with a huge amount of change,” Citizens CEO Bruce Van Saun, told Barron’s. “You have to be very agile and forward looking, knowing where things are going and how to position ourselves.”

(MTB) is another bank offering a yield above 3%—3.3%, to be exact—that is in the midst of an acquisition. The Buffalo, N.Y.–based bank announced plans to acquire

(PBCT) by the end of the year—a move that will expand its Northeast and mid-Atlantic footprint.

While the bank missed expectations on second-quarter earnings, due in part to higher expenses, the long term prospects look compelling—even more so since the bank trades at a slight discount to peers.

“We expect a smooth integration with PBCT with potential top-line synergies over time as well. While the ‘deal stock’ specter may hover near-term, the stock is starting to get more interesting at [around] 1.6 times tangible book value,” David George, senior research analyst at Baird, wrote in a note Thursday. Peers currently trade at 1.8 times tangible book value, according to FactSet data.

(KEY) yields 3.8% and shares are up about 17% this year. In the most recent quarter, results were helped by fee income offsetting a drop in net income margins, according to George. Expenses were flat and net charge-offs were down 0.1%—a sharp drop from the first quarter of 2021 and the year-ago quarter. George calls the risk-reward trade-off balanced, noting that the Cleveland–based bank is well-equipped to navigate the low-rate environment for the next few quarters based on strength in its investment bank.

(FITB) is another bank that is well-equipped to navigate the low interest-rate world, having seen net interest income grow 2.7% from the first quarter of 2021. It plans to raise its dividend by 3 cents in the third quarter and repurchase $850 million of shares in the back half of 2021. Shares of the Cincinnati–based bank yield 3%.

With bank stocks changing little now as investors navigate the impact of low bond yields and a tepid climate for loan growth, there are at least some opportunities in the industry where investors can be paid to wait.

Fifth Third Bancorp is based in Cincinnati, Ohio. An earlier version of this article incorrectly said Alabama.

Write to Carleton English at carleton.english@dowjones.com