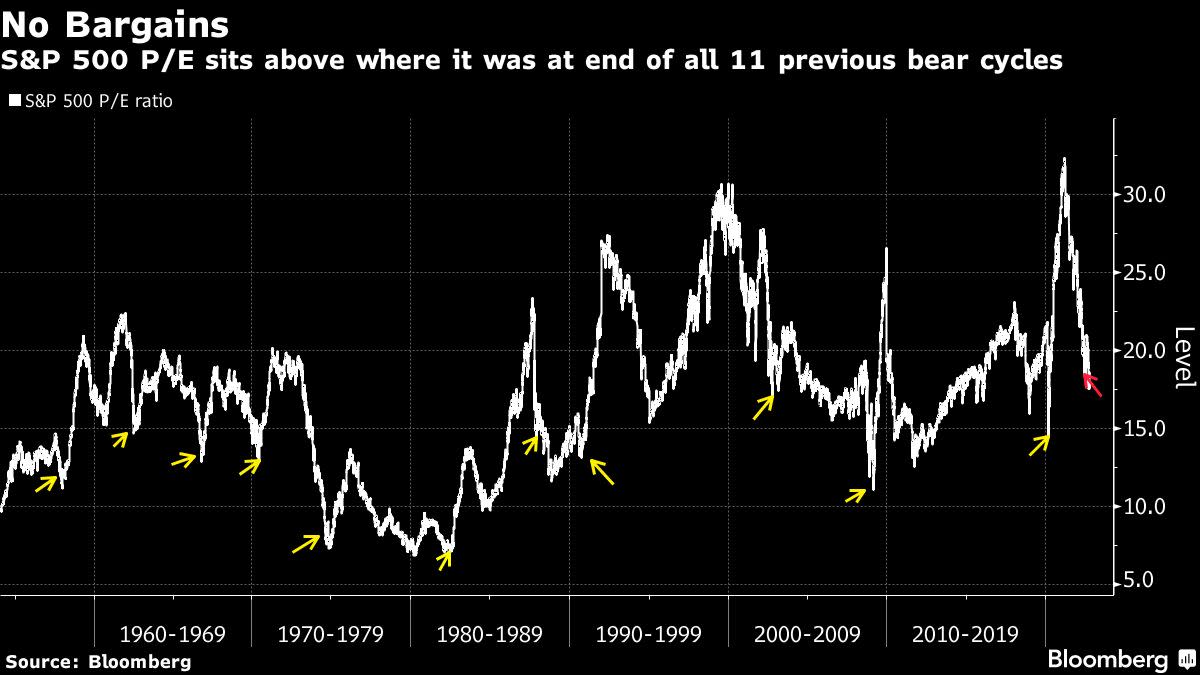 Why Stocks Swung 5% in One Day

(Bloomberg) — A shock turnaround in equities sent Wall Street searching for something — anything — to explain how yet another red-hot inflation number translated into one of the best days of the year.

Among the answers: increasingly sturdy positioning including well-provisioned hedges, a watershed moment for chart watchers, and several less-than-terrible earnings reports. Throw in some short covering, and the result was a trough-to-peak run-up in S&P 500 futures that reached 5.6% at its widest.

Expect the unexpected has become the only mantra in a market when cross-currents are flowing from every direction, including a Federal Reserve bent on subduing inflation while keeping half an eye on financial stability. Thursday’s turnaround came after the S&P 500 erased half its climb from 2020’s pandemic low, a hit to wealth that while showing no sign yet of curbing inflation, may one day play a part in achieving that goal.

“It’s the nature of the beast these days where sometimes you get these intraday big swings. We can all speculate on what might be behind it,” said Liz Ann Sonders, chief investment strategist for Charles Schwab & Co. “A lot of it has to do, for lack of a better word, the mechanics of the market, the fact that there’s more shorter-term money in the market, there’s more money that moves around based on algorithms, quantitative strategies. And at any point in time you can have triggers that can cause a 180 in the middle of the day.”

With calling the direction of stocks a near impossibility, professional traders have been busy limiting their exposure to surprise moves. Institutions bought more than $10 billion in puts on individual stocks last week, a record for that group and close to the most ever by any cohort of traders, according to Sundial Capital Research.

There was circumstantial evidence those wagers paid off in the immediate aftermath of the government’s report on consumer prices, which showed hotter-than-expected inflation. While equity futures sold off, the Cboe Volatility Index, a gauge of market anxiety tied to options on the S&P 500, actually fell, potentially a sign of profit-taking by hedged traders. And as those positions were monetized, that prompted market makers to unwind short positions they had put on to maintain their neutral market stance.

Elsewhere, a clutch of technical signals was on the bulls’ side, among them the 50% retracement in the 22-month rally that broke out in the S&P 500 in March 2020. When the index undercut the 3,517 level, some market-watchers took that as a sign the nine-month selloff had gone too far.

Another buffer came in at the index’s 200-week average, a threshold that hovers around 3,600 and has become a battle line for bulls and bears in recent weeks. In 2016 and 2018, the long-term trend line halted big S&P 500 declines.

“We bounced off of this support level and that becomes self-fulfilling,” said Ellen Haze, chief market strategist and portfolio manager at F.L.Putnam Investment Management. “There’s so much uncertainty in the market and so many data points are conflicting that the market responds to whatever is the most recent.”

It’s the first time since July that the S&P 500 wiped out an intraday decline of more than 2%, yet another of the wild swings is a signature of 2022’s stock market as traders struggle to guess the Fed’s policy path and its impact on the economy. The index has posted 2% reversal days, up or down, six times since January, poised for the wildest year since the 2008 financial crisis.

While providing support for tactical traders, the erasure of half the bull market’s bounty is another grim reminder of how brutal the market has been in 2022. With the S&P 500 is at risk of only its third 20%-plus calendar-year loss of the century. The dream state that ruled markets following the outbreak of Covid-19 is slowly lifting, leaving investors exposed to the impact of a hyper-aggressive Fed and bubble-like valuations.

One bull argument that has persisted throughout the selloff is the resilience of corporate earnings. With the third-quarter reporting season about to move into full swing, bulls may be taking cues from Thursday’s better-than-expected results from companies like Delta Air Lines Inc. and Walgreens Boots Alliance Inc.

Despite this year’s $15 trillion wipeout, stocks are far from screaming buys. At 17.3 times profits, the index’s multiple is above trough valuations seen in all previous 11 bear cycles, data compiled by Bloomberg show. In other words, should equities recover from here, this bear market bottom will have been the most expensive since the 1950s.

“People just realized the prolonged beating of risk assets has to end some time. FOMO leads people to chase this rally,” said Larry Weiss, head of equity trading at Instinet. “Unfortunately, we still have plenty of time to ruin this rally.”