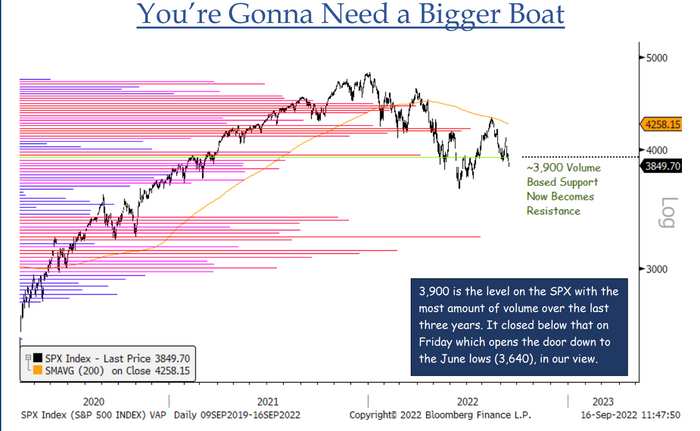 Why stock-market bears are eying June lows after S&P 500 falls back below 3,900

The S&P 500 finished Friday below a crucial chart support level that’s served as a battleground in recent years, leading technical analysts to warn of a potential test of the stock market’s June lows.

“Over the last three years, the level on the [S&P 500] with the most amount of volume traded has been 3,900. It closed below that on Friday for the first time since July 18 which, in our view, opens the door down to the June lows” near 3,640, said Jonathan Krinsky, chief market technician at BTIG, in a Sunday note (see chart below).

A move back to the June lows likely won’t be a straight line, Krinsky wrote, but the lack so far of discernible “panic” in the Cboe Volatility Index
VIX,
+0.11%
futures curve and the lack of a drop to more extreme oversold conditions as measured by monthly relative strength index don’t bode well, he said.

Other analysts have noted the lack of a sharper rise in the spot VIX, often referred to as Wall Street’s “fear gauge.” The options-based VIX ended Friday at 26.30 after trading as high as 28.42, above its long-term average near 20 but well below panic levels often seen near market bottoms above 40.

Stocks had bounced back sharply from the June lows, which had seen the S&P 500 down 23.6% from its Jan. 3 record finish at 4,796.56. Krinsky and other chart watchers had noted the S&P 500 in August completed a more-than-50% retracement of its fall from the January high to the June low — a move that in the past had not been followed by a new low.

Krinsky at the time had warned, however, against chasing the bounce, writing on Aug. 11 that the “tactical risk/reward looks poor to us here.”

Michael Kramer, founder of Mott Capital Management, had warned in a note last week that a close below 3,900 would set up a test of support at 3,835, “where the next big gap to fill in the market rests.”

Stocks fell sharply last week after a Tuesday reading on the August consumer-price index showed inflation running hotter than expected. The data cemented expectations for the Federal Reserve to deliver another supersize 75-basis-point, or 0.75-percentage-point, rise in the fed-funds rate, with some traders and analysts penciling in a 100-basis-point hike when policy makers complete a two-day meeting on Wednesday.

Preview: The Fed is ready to tell us how much ‘pain’ the economy will suffer. It still won’t hint at recession though.

The market’s bounce off its June lows came as some investors had grown more confident in a Goldilocks scenario in which the Fed’s policy tightening would wring out inflation in relatively short order. For bulls, the hope was that the Fed would be able to “pivot” away from rate increases, averting a recession.

Stubborn inflation readings have left investors to raise expectations for where they think rates will top out, heightening fears of a recession or sharp slowdown. Aggressive tightening by other major central banks has stoked fears of a broad global slowdown.

See: Can the Fed tame inflation without crushing the stock market? What investors need to know.

Hear from Ray Dalio at the Best New Ideas in Money Festival on Sept. 21 and Sept. 22 in New York. The hedge-fund pioneer has strong views on where the economy is headed.

2022-09-18
Previous Post: How to decorate your home on a budget, according to interior designers
Next Post: QQQ Is Not There Quite Yet