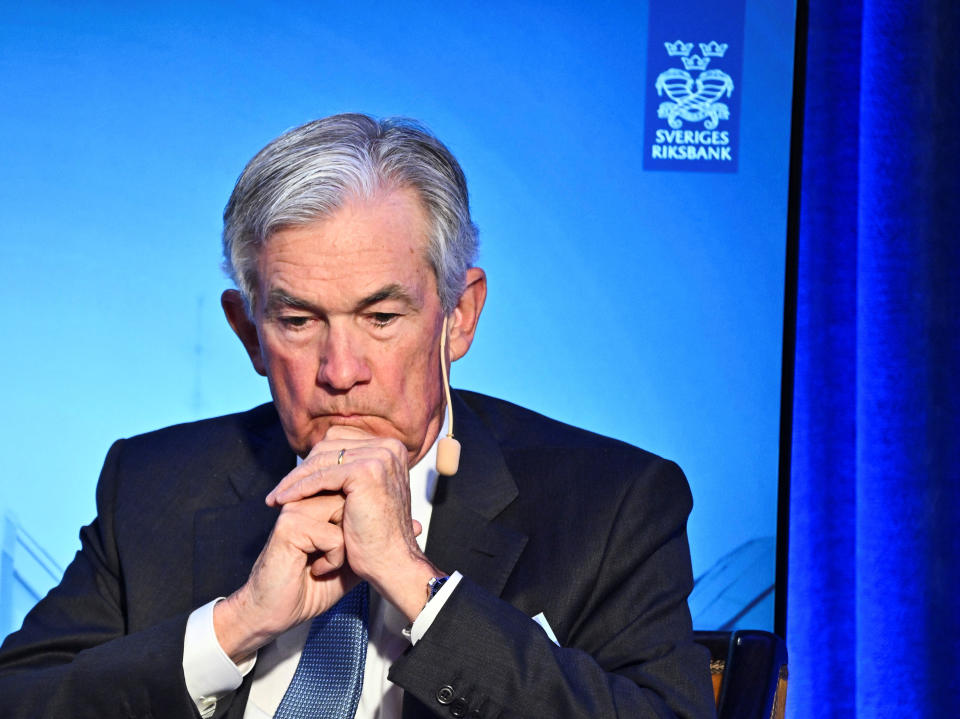 Price pressures abated last month to close out a year of historic inflation and the most aggressive monetary policy action in decades.

December’s Consumer Price Index (CPI) showed prices rose at an annual 6.5% and fell 0.1% over the month. So-called “core” inflation, which strips out food and energy, climbed 5.7% year over year and 0.3% over the prior month.

While the reading marked a third straight downtrend in consumer inflation — and came in well below its 9.1% high of the cycle in June 2022 — key components of the report like food and housing remain stubbornly high on a historical basis.

Investors had hoped the highly anticipated reading would offer clarity on the direction of Federal Reserve policy, but Wall Street’s reaction was mixed. Some said signs of deflation were enough for officials to pause and even cut interest rates later this year. Others, meanwhile, maintained that still-high prices facing U.S. consumers would keep the Fed on track with its plans to hike to as high as 5%.

As Lazard’s Ron Temple put it, “both hawks and doves can find fodder in today’s report.”

A deluge of takes from economists and strategists infiltrated our inboxes in the aftermath of Thursday’s reading. Yahoo Finance rounded up some of what we got below.

“Both hawks and doves can find fodder in today’s report. Doves will point to core goods prices, where used cars subtracted 12bps from core CPI. Hawks would point to services contributing 40bps to core CPI with shelter comprising ~80% of the increase. Encouragingly, shelter inflation has decelerated substantially and will contribute less through the year. Services excluding shelter are the primary concern, which accelerated, but from low levels. The bottom line is that inflation is trending in the right direction but remains too high for the Fed to declare victory, locking in the case for 25bps on February 1, but likely decreasing the odds of 50bps.”

“Overall, our measure of core-core inflation, which strips out rents and several other noisy, Covid-distorted components, rose 0.3% in December, up a bit from October and November but a world away from the spikes in September and October. The trend in the core-core tends to track the rate of growth of hourly wages, which is now clearly slowing. The Fed now has enough information, we think, to take the idea that inflation has turned much more seriously. We stick with our forecast of a 25-basis-point hike on Feb. 1, and then no further increases. Hammering away at an economy where disinflationary pressure already is clear, long before the full effect of the tightening so far have been felt, is very hard to justify.”

“The market has priced in a very optimistic scenario about CPI in the previous days. The numbers came in at exactly the expectations level. That means that some of the optimism in the markets may get unwound both in equities and fixed income. While a 25-basis-point hike in the next Fed meeting is still in play, the strength of housing in the core CPI and the benign jobless claims support the scenario of a 50-basis-point hike in the next meeting. However, what matters most for the markets is the terminal Fed rate, not so much the pace of hikes. As we get closer to the terminal rate, the pace of hikes needs to slow down.”

“It was a very favorable report with inflation moderating in several areas, including the food inflation which is starting to cool. Overall, the CPI report reinforces the trend of a declining rate of inflation and we now have a string of three months pointing in that same direction. Most importantly, this is happening with a labor market that remains healthy. This should soften the Fed’s tone at the next meeting, and it reinforces our belief in a soft landing in which inflation falls but the labor market remains healthy and the economy recalibrates to higher interest rates in the coming quarters.”

Chair of the Board of Governors of the Federal Reserve System Jerome H. Powell participates in a panel during a Central Bank Symposium at the Grand Hotel in Stockholm, Sweden, January 10, 2023. TT News Agency/Claudio Bresciani/via REUTERS

“After so much fanfare and focus on today’s CPI report, the release is a little underwhelming. Not only are the numbers exactly in line with consensus expectations, but they don’t really clear up the 25-basis-point vs. 50-basis-point question for the Fed’s February meeting and add nothing to the late-2023 Fed pivot debate either. Taking a step back, evidence is building that inflation is cooling and will continue to do so over the coming months. But perhaps the real question will come in late Q2 as inflation tries to move below the 4-4.5% handle. If it plateaus there, then the Fed will have very little space to cut rates this year and markets will face renewed challenges. And if it falls steadily through that threshold due to growing economic weakness, permitting Fed loosening, markets will still be challenged due to earnings concerns.”

“Although the headline and core CPI figures were in line with market expectations, the details of the report were somewhat constructive from the Fed’s perspective. Chair Powell has argued that disinflation in core services ex. of housing is a necessary condition for overall inflation to return to the Fed’s target on a sustained basis. There has been a significant slowdown in this component over the last few months. Accordingly, markets appear to have looked through the upside surprise in shelter inflation and are now pricing around an 80% chance of a 25-basis-point-hike, rather than 50 basis points, in February. This move makes sense to us as the risks of a 25-basis-point-hike are clearly rising. The Fed typically does not surprise markets during hiking cycles, so policymakers will have to push back strongly against current pricing if they plan to hike by 50 basis points.”

“The easing of inflation pressures is evident, but this doesn’t mean the Federal Reserve’s job is done. There is still a long way to go to get to 2% inflation. Moderating inflation is most apparent in the prices for goods – such as used cars and trucks that have declined for 6 straight months. But it is in services where labor shortages are most pronounced, making services inflation tougher to corral. Despite the headline and core results meeting expectations, the broad-based improvement that needs to be seen to get inflation truly under control is still lacking.”

“We think inflation will continue to remain stubbornly high for the rest of 2023, but will moderate to around 3.5% by the end of the year, above the Fed’s 2% target. While we can safely say that we are past peak inflation, it is too early to call victory in the battle against higher inflation. This means that investors should continue to think about hedging against inflation and consider how higher interest rates for longer could affect their portfolios.”

“Today’s CPI reading is another sign that inflation is heading in the right direction and indicates the peak is likely in the rear view. Though we aren’t out of the woods yet as it is still well-above the Fed’s target rate and the Fed has remained adamant that they will keep rates high to bring inflation back to normal levels. The market’s timid initial response may be a sign that while they acknowledge inflation is slowing, rate cuts likely aren’t on the agenda anytime soon.”

“Disinflation is gaining momentum as we enter 2023, giving the ‘all clear’ for the Fed to ease off the rapid pace of monetary policy tightening. Sequential price momentum remains encouraging. While disinflation is well underway, inflation remains historically elevated, and the current easing of financial conditions is challenging the Fed’s narrative that it will continue raising the federal funds rate above 5% and maintain elevated rates for the foreseeable future. We assume the Fed will continue to favor hawkish communication to offset the easing of financial conditions.”

“The key measures the market was looking for included further weakness in durable goods prices, shelter, and Chair Powell’s favorite measure, the core services less-shelter component. This latter index, however, proved less comforting, as it was the strongest monthly change since September, and the annual rate of change was above the November reading of 7.26%. Powell is watching this index because it is generally the stickiest part of the CPI basket and reflects largely non-tradable services (think prices for haircuts); this means that it is also mostly driven by wages and salaries, and strength in the labor market. Hence, the increase here for December, coupled with the paltry 205,000 increase in initial jobless claims released simultaneously, will give the Fed little cause to change its current stance on policy and vote for a further rate increase at the February meeting.”

“Net, net, inflation may be at a turning point, but the progress is painfully slow at putting the fire out and Fed officials will be getting no help whatsoever from the labor market which remains tight as a drum. The market is rethinking the two economic reports on inflation and the labor market and has now recovered its knee-jerk reaction sending bond and stock prices lower. There was some good news for shoppers looking for bargains on the store shelves as food prices slowed to an increase of 0.3% in December even if food is 10.4% higher than it was this time a year ago. New vehicle prices actually dropped 0.1% this month which was first, and used vehicle prices continue to plummet, falling 2.5% in December. Stay tuned. Story developing.”

“Easing inflation indicates that the Federal Reserve rate hikes are having the intended impact. The surprisingly steady labor market, suggested by the recent strong employment report, is providing greater optimism that the Fed may achieve the desired soft landing. Despite the positive overall inflation report, housing costs continue to run hot and will continue to put upward pressure on the overall price measure well into 2023. Chairman Powell has repeatedly emphasized the priority of bringing inflation down, even if it causes short-term economic pain. The positive inflation and employment data will not interrupt the Fed’s rate hike program, but it offers hope that the Fed could be closer to achieving its price stability goals and could slow rate increases. With the inflation rate falling for five consecutive months, the Fed may be able to pause rate increases by the middle of the year.”

“Inflation and the slowing economy will be a big focus for investors during the upcoming Q4 earnings reporting season. We are in the final phase of the bear market — which sometimes can be the most painful phase. This is usually the phase when corporate earnings results and guidance disappoint. We don’t think the CPI reports will be as important as earnings since slowing inflation should already be priced into stocks. We think the bear market may resolve itself this quarter.”