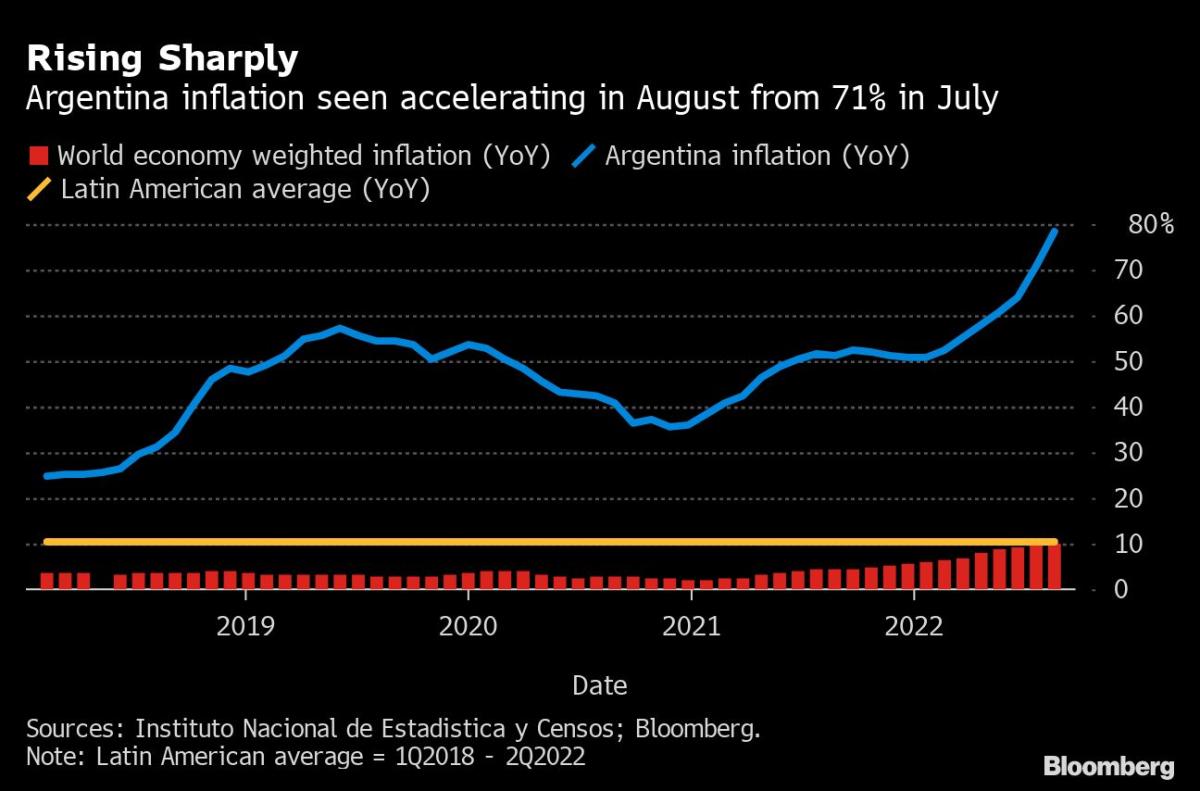 US Inflation Will Guide Fed Readying Next Hike: Eco Week Ahead

(Bloomberg) — US inflation data in the coming week may give the Federal Reserve mixed signals ahead of a potential third-straight jumbo interest-rate hike, with a broad measure of consumer prices likely to simmer down even as a gauge of underlying pressures accelerates.

The government’s report is expected to show an 8% increase in the overall consumer price index from the same month last year, down from 8.5% in July yet still historically elevated. Stripping out energy and food, the CPI is forecast to climb 6.1%, up from 5.9% in the year through July.

Tuesday’s figures, in conjunction with recent data showing healthy job growth, an elevated number of unfilled positions, and resilient household spending, will help shape Fed officials’ views on whether to press ahead with another 75 basis-point rate increase.

In recent speeches US central bankers stressed that high inflation will indeed require higher borrowing costs that slow demand, though they kept the door open on the size of a hike at the conclusion of their Sept. 20-21 meeting. Policy makers are now in a blackout period.

“We are in this for as long as it takes to get inflation down,” Fed Vice Chair Lael Brainard said at a conference on Wednesday. “Monetary policy will need to be restrictive for some time to provide confidence that inflation is moving down to target.”

In addition to the CPI, the US economic data calendar is heavy. Reports include producer prices, industrial production, regional manufacturing surveys and consumer sentiment.

Figures on retail sales will hint at the pace of household demand for merchandise against a backdrop of elevated inflation, higher interest rates and a shift to spending on services and experiences. Economists project a solid gain in retail purchases excluding gasoline and motor vehicles.

“August inflation gauges will likely be very soft, but that won’t change the bottom line: The ‘totality’ of the data that Fed Chair Jerome Powell will follow shows few signs of cooling in the economy, and perhaps even some acceleration.”

Elsewhere, data showing faster UK wages and inflation are due just as the country continues mourning its queen, and Russia’s central bank may cut rates.

Click here for what happened last week and below is our wrap of what’s coming up in the global economy.

With the UK continuing a national period of mourning for the loss of Queen Elizabeth II, the Bank of England postponed for a week its policy meeting and likely aggressive rate hike that was scheduled for Thursday.

The delay will give officials more time to weigh data that will further illustrate the fallout from the country’s cost-of-living crisis. That includes wage data on Tuesday, predicted to show a pickup, and inflation on Wednesday, which may stray further above 10%.

European Central Bank policy makers, who just delivered unprecedented monetary tightening with a three-quarter-point rate hike, will make several speeches. Among them is Executive Board member Isabel Schnabel at a research conference hosted by the central bank.

Bundesbank chief Joachim Nagel said Sunday that the will be required to continue raising rates if the current trend in consumer prices continues.

Among potentially notable data is German investor confidence on Tuesday and European industrial production on Wednesday, both of which may signal how the economy is responding to being starved of gas by Russia.

Further north, Swedish inflation is predicted to jump by more than a percentage point to reach close to 10%. That will inform Riksbank officials, who are weighing whether to make a 75 basis-point rate hike the following week.

By contrast, Russia’s central bank is expected to cut its rates again on Friday as inflation slows and so does the economy.

Data in Israel on Thursday will show how broadly price increases have spread, a month after inflation unexpectedly shot up to 5.2%. The Bank of Israel now believes there won’t be a meaningful decline before year-end and is expected to continue aggressively hiking rates.

Ghana data on Wednesday will likely show inflation quickened to more than triple the ceiling of the central bank’s 10% target on currency weakness. The bank meets next on Sept. 20 — and will announce its decision on Sept. 26 — after hiking the benchmark rate by the biggest margin since 2002.

Data on Thursday will probably show Nigerian inflation accelerated to more than double the central bank’s 9% ceiling as the naira continues to drop. The uptick may prompt it to raise its rate for a third successive meeting on Sept. 27.

In Japan, the slide in the yen to new 24-year lows is likely to keep investor interest closely focused on senior officials’ comments on any further moves, and whether the possibility of currency market intervention is any closer.

Figures out on Thursday will show the impact of the weaker yen on the trade balance of the world’s third-largest economy.

In China, the central bank is expected to keep a key rate unchanged on Thursday following last month’s surprise reduction. Key economic indicators on Friday will be closely watched to see the extent of damage from Covid lockdowns and power shortages during August.

Down Under, jobs data will show how the recovery is holding up, with the Reserve Bank of Australia now looking more likely to revert to smaller rate increases.

New Zealand’s economy is expected to have returned to growth as it weathers a continued flurry of half percentage rate hikes, with the Reserve Bank of New Zealand set to press ahead with more.

In South Korea, jobless numbers on Friday will show how tight the country’s labor market remains.

In Argentina, all signs suggest that inflation’s surge extended into August, with the year-on-year print coming in just under 80%. One local consulting group foresees a year-end reading just shy of 100%.

Central bank surveys of economists in Brazil and Chile may reflect the sharp move down in August inflation readings in the former and Banco Central de Chile’s outsized Sept. 6 rate hike in the latter.

Data out mid-week may show a bounce in core Brazil retail sales, while the broad readings extend a year-long slump. Expect Brazil’s GDP-proxy data to show that the strong finish to the second quarter extended into July.

Mid-month reports from Peru include the August unemployment print for the country’s capital, Lima, as well as GDP-proxy data for July. The economy lost some momentum in the second quarter and is heading into a challenging second half.

(Updates with Nagel in EMEA section)

2022-09-11
Previous Post: 6 Positive Changes That Come When You Start Showing Authenticity in Your Business
Next Post: Learn How to Protect Your Business From Cybersecurity Risks