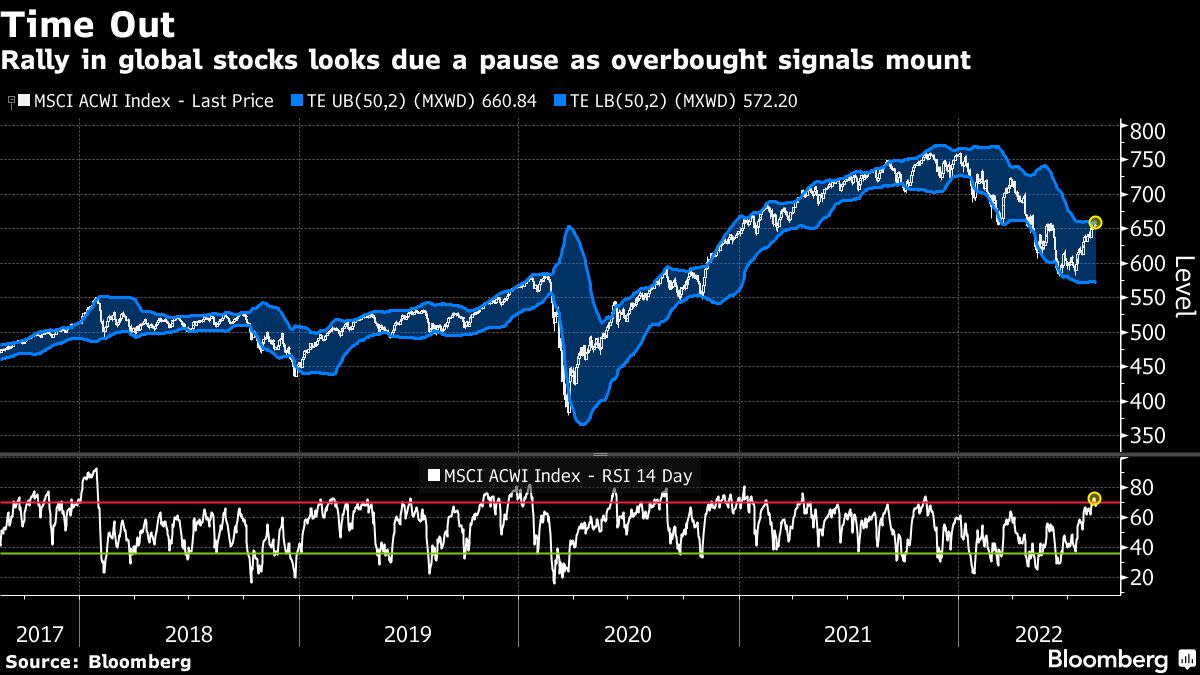 (Bloomberg) — U.S. equity-index futures pared losses in a volatile session after the Federal Reserve signaled a delicate balancing act that would see inflation-busting rate hikes continue despite a weakening economy.

September contracts on the S&P 500 and Nasdaq 100 slid about 0.1% after the underlying benchmarks posted losses on Wednesday. The two-year Treasury yield, the most sensitive to monetary tightening, fluctuated as investors parsed some dovish elements in the minutes of the Fed’s latest meeting. The dollar rose for a second day. Cisco Systems rose in New York premarket trading after issuing an upbeat sales forecast.

While policy makers warned against over-tightening and signaled the potential for slower rate increases at some point, they also flagged the risk of inflation pressures becoming entrenched. The nuanced messaging wasn’t dovish enough for markets to sustain a risk-on stance into Thursday. Caution was the byword of the moment with further clues awaited at the Fed’s annual symposium in Jackson Hole, Wyoming next week.

“People are a little overly optimistic about how likely it is that we can solve the inflation problem quickly and in a way where we don’t have to include more policy and more rising rates,” Kathryn Kaminski, AlphaSimplex Group chief research strategist and portfolio manager, said on Bloomberg Television.

Swaps tied to Fed policy meeting dates indicated lower odds of a 75 basis points hike next month as opposed to a half-point move. Expectations of slower policy tightening and a pivot to cuts later next year have already contributed to a 12% jump in global stocks from June lows. The question is whether that’s too optimistic. A darker scenario may entail persistent price pressures forcing restrictive borrowing costs amid a shrinking economy

Treasuries struggled for direction. The two-year rate rose more than 3 basis points and fell almost 4 basis points before trading little changed. The dollar was 0.1% higher, with most of its gains coming from the euro’s losses.

Cisco rose 4.3% in early New York trading after issuing an upbeat forecast for quarterly sales as chip-supply shortages ease and the company is able to fill more orders.

Losses in Japan, China and a Hong Kong tech index sapped an Asian equity gauge on Thursday. Goldman Sachs Group Inc. economists downgraded their forecast for China’s full-year expansion to 3% from 3.3%. The nation is hamstrung by a property crisis, rolling Covid curbs and stressed power supplies.

Chinese state media said local governments could sell more than $229 billion of bonds to fund infrastructure investment and plug budget gaps in a bid to shore up growth.

Crude oil fluctuated between gains and losses and investors weighed bullish signals from the US and the OPEC grouping of producers against signs of economic slowdown. West Texas Intermediate futures traded above $89 a barrel.

Inflation remains the most closely-watched indicator in the second half. Will it come down gradually, or will it stay elevated, forcing the Fed to keep raising rates aggressively? Have your say in the anonymous MLIV Pulse survey.