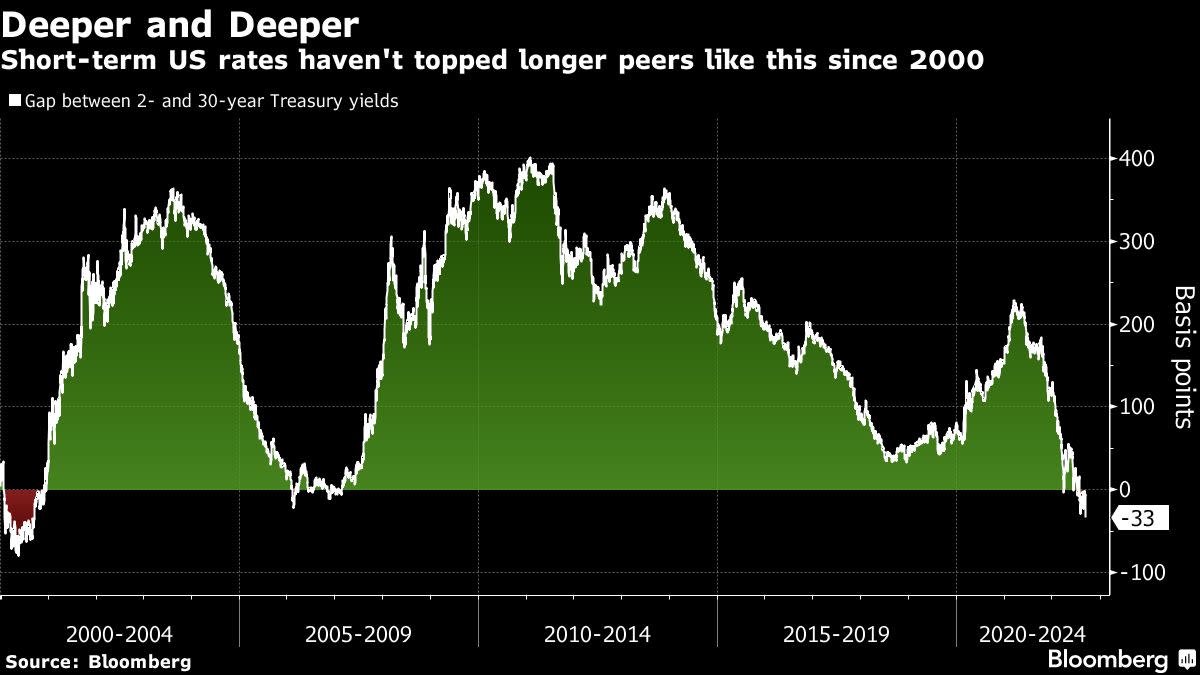 (Bloomberg) — The premium of the two-year Treasury yield over the comparable 30-year benchmark increased to a level unseen this century after short-end rates extended their climb in the wake of this week’s hotter-than-anticipated US consumer-price inflation data.

The two-year yield was as much as 35 basis points above the 30-year rate on Thursday, sending the inversion of the yield curve past the depths plumbed in August to levels last seen in 2000.

The two-year Treasury rate surged 23 basis points this week to 3.79% amid expectations the Federal Reserve will need to keep tightening policy rapidly to curb inflation. The 30-year yield has edged up by less than two basis points in the same period to 3.46%.

“The curve is flattening more and the hard-landing scenario is a higher risk after the inflation data,” said John Madziyire, a portfolio manager at Vanguard. “More rate cuts are being priced in 2023 into 2024,” by interest rate futures, he added.

Treasury curve inversions are widely watched indicators that are seen by many as a potential harbinger of economic distress. The gap between 2 and 30 years marks the difference between the longest and shortest ordinary US benchmarks, although others such as the 5-to-30 gap and the 2-to-10 spread are generally more closely followed. The 10-year yield was little changed at 3.41%.

Traders, via the overnight index swap contract for next week’s Federal Open Market Committee meeting, on Wednesday priced in 80 basis points of tightening, suggesting there’s a slight chance of a 100-basis-point move rather than an increase of 75 basis points.

“The market is going to give the Fed the option to move 100 basis points next week,” said John Brady, managing director at RJ O’Brien, a futures brokerage in Chicago. “The Fed may not.” Beyond the market pricing for September, traders are also providing the central bank with “the option to go 50 basis points at the November and the December meetings,” he said.

Which Yield Curves Matter, and What Are They Saying?: QuickTake