Investor concerns have yet to abate, with worries given some added impetus last week when Fed Chair Jerome Powell said bluntly that the central bank is not done raising interest rates – and that the next couple of years are going to hurt. In one way, this is good news, as it signals clearly that the central bank will concentrate on combatting the high inflation that is weighing down the economy, but it also dramatically increases the risk that the Fed’s moves will spark a recession.

The immediate result was a sudden drop in stocks across the board, but the unintended consequence may be new opportunities for investors. With markets pulling back, it may just be time for investors to go bottom fishing.

So, let’s get a look at some stocks that are languishing in the doldrums. Using the TipRanks platform, we’ve pulled up details on three stocks that are down more than 50% so far this year – but that also still boast a Strong Buy rating from the Street’s analysts – and upside potential starting at 80% or better. Let’s take a closer look.

We’ll start with RingCentral, a tech firm with a focus on communications-as-a-service. RingCentral offers software packages designed to solve the communications issues common in the modern office environment. The company’s software products allow for phone lines, video calling, screen sharing, call forwarding, and other telecom features all to be routed through the office computer system. The system is also compatible with such popular applications as Google Docs, Salesforce, and Outlook, and can be accessed through desktop, tablet, and smartphone devices.

As can be imagined, RingCentral did well during the lockdown periods of the COVID crisis. Cloud-based office software saw a general surge at that time, and exuberance pushed those stock prices way up. Since then, as businesses have reopened physical locations, these services have receded in importance; they are still useful, and still in demand, but investors have pulled back from them as the office environment has normalized.

That helps explain why RNG shares are down 77% so far this year, even as the company’s revenues and earnings have continued to rise. In the most recent quarterly report, for 2Q22, revenues grew 28% year-over-year, to reach $487 million. Turning to earnings, the non-GAAP diluted EPS grew from 32 cents to 45 cents, a 40% y/y gain.

These impressive results were driven by strong increases in subscriptions, which were up 32% y/y and reached a new total of $463 million. The company’s Annualized Exit Monthly Recurring Subscriptions, equivalent to the annualized recurring revenue (ARR), grew by 31% and hit $2 billion.

What this comes down to, is a stock that investors need to pay more attention to – in the view of MKM Partners analyst Catharine Trebnick.

“We believe RingCentral offers investors high-visibility, multi-year stable revenue growth in a large, underpenetrated market with a solid competitive position and a robust multi-modal communications platform with a value proposition tailored to capture growth from the hybrid work-from-anywhere business transformation. While RingCentral has multiple growth vectors, we believe its solution augmentation with Microsoft Teams will be substantial. We believe RingCentral is one of the best-positioned companies to capture this growth with its compelling go-to-market strategy backed up by its strong track record in channel execution,” Trebnick opined.

In Trebnick’s view, this justifies a Buy rating, and her $80 price target indicates her confidence in a one-year upside potential of 87%. (To watch Trebnick’s track record, click here)

Like many leading-edge tech firms, RingCentral has picked up a lot of attention from the Street, and has 18 analyst reviews on record. These include 14 Buys over 4 Holds, for a Strong Buy consensus rating. The shares have an average price target of $80.56, implying ~88% one-year gain from the current share price of $42.79. (See RNG stock forecast on TipRanks) 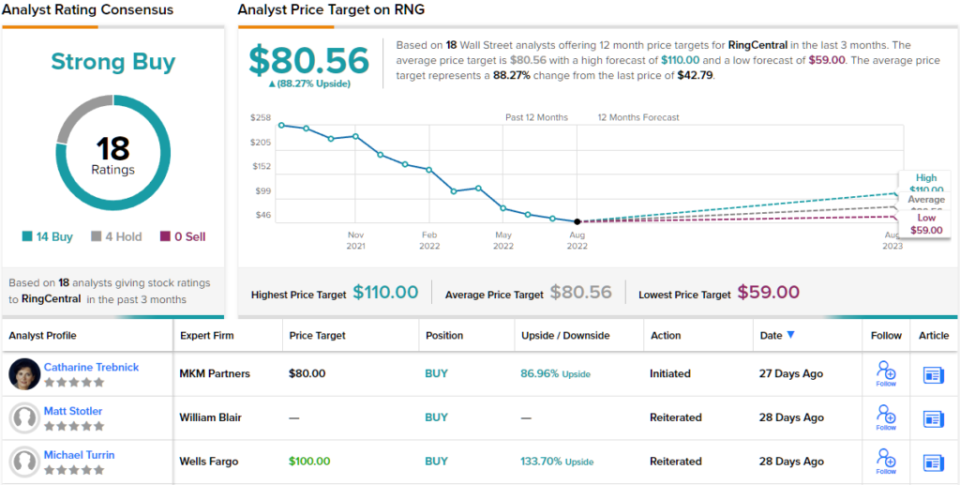 Let’s stick with business software, and take a look at Zuora. This company creates software systems that allow businesses to better launch and manage their subscription services. From tracking customers to automating billing, collections, and quoting, to sorting subscription data metrics, Zuora streamlines the busy work so that enterprise customers can focus on their primary missions. Among Zuora’s partnerships are such major names as Mastercard, PayPal, and IBM.

Over the past two years, Zuora has seen its top line revenues make slow, steady gains. The company recently released results for Q2 of fiscal year 2023 – the quarter ending on July 31 – and showed 14% year-over-year gain in revenues, which reached $98.8 million.

The company runs a net loss, however, and burns cash. At the bottom line, Zuora reported a non-GAAP EPS loss of 3 cents per share. This was not as deep as the 5-cent loss forecast, and was an improvement from the 4-cent loss reported in the year-ago quarter. The company’s EPS losses have fluctuated in the past two years, ranging between 1 and 4 cents per share.

On the cash burn, Zuora reported $4.8 million in net cash used in ops during fiscal 2Q23, compared to $2.6 million in the year-ago quarter. Free cash flow was deeply negative, at $7.6 million; this compared poorly to the $4.4 million negative FCF in fiscal F2Q22. At the same time, the company still has plenty of cash on hand, with $448.6 million in liquid assets as of July 31 of this year.

Shares in ZUO have fallen sharply in recent months, and the stock is down by 58% since the start of the year. However, the stock has been attracting positive attention from Wall Street analysts, who see the low price as an attractive entry point.

Among the bulls is Joseph Vafi, 5-star analyst with Canaccord Genuity, who notes that Zuora undertook a strategic initiative, starting 18 months ago, to improve performance – and that it has been paying dividends for the company.

“The company is having success with large enterprises and closed seven deals with ACV (annual contract value) of more than $500K, up from six in Q1. We are also seeing continued momentum with SI partners, which influenced over 70% of business transactions in Q2. In addition, deals sourced by SI partners in Q2 were twice as large vs. last year. Finally, the company experienced its lowest churn rate since going public in 2018, reflecting a more resilient customer base,” Vafi commented.

In this top analyst’s view, this stock is worth a Buy rating, and his $20 price target implies a robust 155% upside on the one-year horizon. (To watch Vafi’s track record, click here)

So, that’s Canaccord’s view, what does the rest of the Street make of ZUO’s prospects? All are on board, as it happens. The stock has a Strong Buy consensus rating, based on a unanimous 3 Buys. ZUO is selling for $7.83 and its average target of $17 suggests it has a 117% upside from that level. (See ZUO stock forecast on TipRanks) 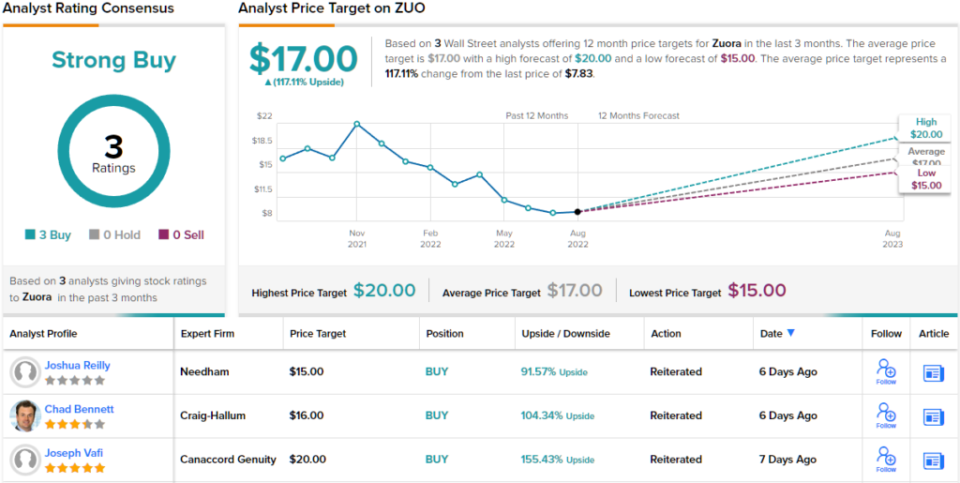 Last up is SiTime, an interesting company in the high tech world. SiTime provides a set of highly specific, completely vital services – the development and manufacture of MEMS timing products for electronic systems. Built into silicon chips, these units include clocks, oscillators, and resonators; SiTime offers products that draw lower power, and retain high performance and availability. The company’s products are essential in maintaining stable signals and connections in networked systems.

On August 3, SiTime released its 2Q22 results – and the stock fell by 35%, a drop that accounted for much of the current year-to-date loss of 62%. The fall in share value came when the company cut back on its 2H22 guidance, reducing its growth projections from 50% to 35%. Management cited customers’ high inventory in the cutback, noting that this will slow down future sales.

For the past quarter, SiTime reported adjusted earnings of $1.11 per share, beating the $1.01 forecast by a 10% margin. Total revenues for the quarter hit $79.4 million, up 78% year-over-year. The company’s recent history of such strong gains tended to put a spotlight on the guidance cutback.

Raymond James analyst Melissa Fairbanks takes all of this into account when she writes: “While the challenges related to weakening consumer spending have been expected, the speed and magnitude of the impact on SITM was somewhat surprising – just three months ago, the company had raised the full-year revenue growth target to ‘at least 50% y/ y,’ but now has reverted back to the original 35% target, an indication of how quickly demand signals changed. The good news is that the underlying demand signals in key verticals – cloud, EV, high-performance IoT – are still strong over the long term, and the sharp weakness in lower-end products serves to accelerate the mix-shift toward higher-value precision timing solutions, providing a natural margin uplift over time.”

“Net,” the analyst summed up, “while our estimates are coming down in the near term, we believe the fundamental thesis remains unchanged, with SITM set to capture the majority share of the precision timing market amid a strongly growing TAM.”

These comments come along with an Outperform (i.e. Buy) rating and a $240 price target, which suggests a powerful 117% upside potential for the stock in the next 12 months. (To watch Fairbanks’ track record, click here)

Overall, all 4 of the recent analyst reviews on this stock are positive, giving SiTime its Strong Buy consensus rating. The stock is selling for $110.75 and its $216.25 average price target implies ~95% potential gain for the coming year. (See SITM stock forecast on TipRanks) 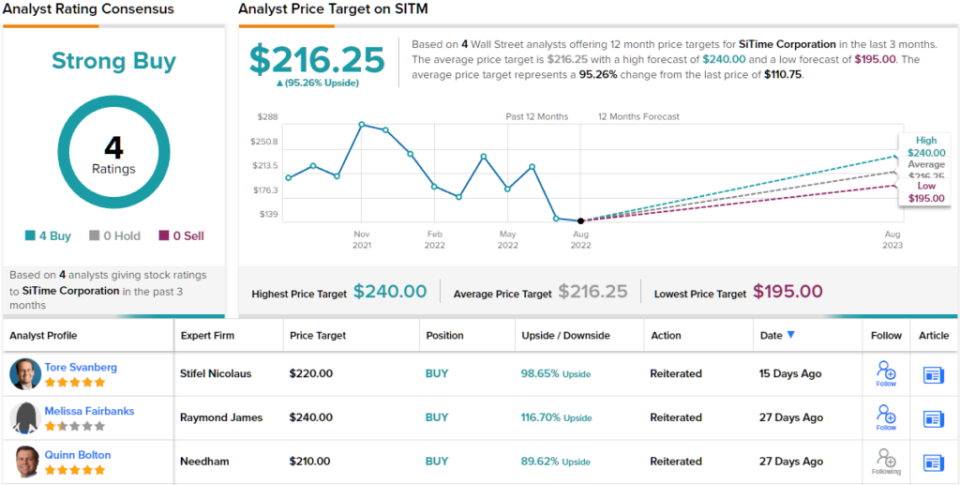 The Federal Reserve’s chance of a policy error has increased: JPMorgan