Those flaming piles of garbage could be the five software stocks (of companies losing money and valued at 85 times forward earnings) on your watchlist that have on average lost 25% in the past four weeks as a result of Federal Reserve rate hike fears (and to a lesser extent slowing growth, as seen in Netflix’s earnings last week). Or, it could be the five bitcoin derivative plays that have shed 15% in five sessions as prices for the benchmark crypto have fallen through a trap door to commence 2022.

Nope, in this environment of soon-to-be much higher rates friends, the data is clear — buy quality.

And what defines quality stocks in this environment? Companies that are laughing in the face of inflation and expanding profit margins, growing free cash flow (operating cash minus capital expenditures) and have business models that aren’t as paper thin as an analyst buy thesis on Kohl’s (more on that below).

So start compiling those stock screens on Yahoo Finance Plus today. And as always, happy trading!

Bitcoin: Where are all the bitcoin bulls predicting $100,000-plus prices now? You know the fine folks pumping bitcoin as some sort of life-changing technology created by a higher life form with DNA ties to ET. You know, the ones rolling up to crypto conferences in used Lamborgini’s (more on Lambo below) and wearing an entry-level Rolex. I could tell you where they aren’t — out there on social media pounding the table on bitcoin’s amazingness and doubling down on their bullish calls. It also doesn’t look like they are buying, either. Bitcoin had another terrible weekend mostly on regulatory concerns and the broader pullback in tech stocks, with prices cratering to a shade over $35,000 compared to about $43,000 on Jan. 20. Prices are at a six-month low, per Yahoo Finance Plus data, and are down 26% year-to-date — badly lagging the major stock indexes. Sources tell Yahoo Finance cryptocurrency reporter David Hollerith the selling may not yet be done.

If you are bullish on bitcoin, drop me a line on Twitter @BrianSozzi. I’m curious on how you are playing this rout.

Calling all bitcoin bulls from underneath your rocks.

To the meme army: In the past week, I published two stories on meme army favorites GameStop and AMC. Suffice to say, I have been hammered with putrid tweets from the meme army — you could always tell they are part of this dwindling, raucous crew as they lack any clear understanding of fundamental analysis (or true investing) or fail to serve up any coherent reason they are trading these fundamentally beat up companies that are mere shells of their former selves. I want to make myself clear on two fronts after ingesting a week’s full of these tweets. First, I am not making any buy or sell recommendations on these stocks nor any other ones. This is not what we do here at Yahoo Finance. What I am calling attention to is fundamental flaws at both companies.

GameStop is operating thousands of costly retail stores in a world of digital downloads for content. An upstart NFT marketplace — as GameStop appears to be pursuing —isn’t going to magically create enough cash flow for Ryan Cohen to close all these stores down forever in a single day. Do you know how ridiculous this sounds? Do you also know how ridiculous it is Cohen and his CEO Matt Furlong are holding 10-minute earnings calls and not sharing any real plans to turnaround the company? Of course it’s ridiculous. Wake up!

Or how about AMC, led by chief Adam Aron. This guy is dumping millions of his personal shares in the company while the stock is tanking. How is that a good thing? The box office is off to another crap year due to the pandemic. Netflix is still doing great despite its mixed earnings report last week, underscoring the ongoing fundamental shift on how we watch movies and content. Second, as a wise investing mentor once told me on markets: “price is truth.” GameStop and AMC shares are down 70% and 71%, respectively, from their early 2021 closing highs in large part because of these fundamental flaws I just described. You actually think stocks that go down that much are suggesting a healthy business will emerge one year, three years or five years from now? Give me a break. But hey, keep those tweets coming — I enjoy learning new words and phrases.

Shares of GameStop and AMC are falling apart a few weeks into 2022.

3 charts to watch: First up, a hat tip to the Financial Times Robin Wigglesworth for shedding light on the below chart comparing the one-year of performance of the value-minded Warren Buffett’s Berkshire Hathaway to the growth-minded Cathie Wood’s Ark Innovation ETF. The performance gap between Berkshire Hathaway and the Ark Innovation ETF has narrowed to about eight percentage points since the beginning of 2020. With pressure on shares of top holdings Tesla and Zoom, Wood’s Ark Innovation ETF is down 24.3% year-to-date versus a 2% gain for Berkshire’s A shares. And who said value investing was dead?

Another chart that caught my eye comes from Yahoo Finance alumni turn TKer founder Sam Ro. The chart shows noteworthy market pullbacks going back to 2009. Food for thought as the Nasdaq enters the week down 12% year-to-date while the bears circle the relatively outperforming S&P 500. 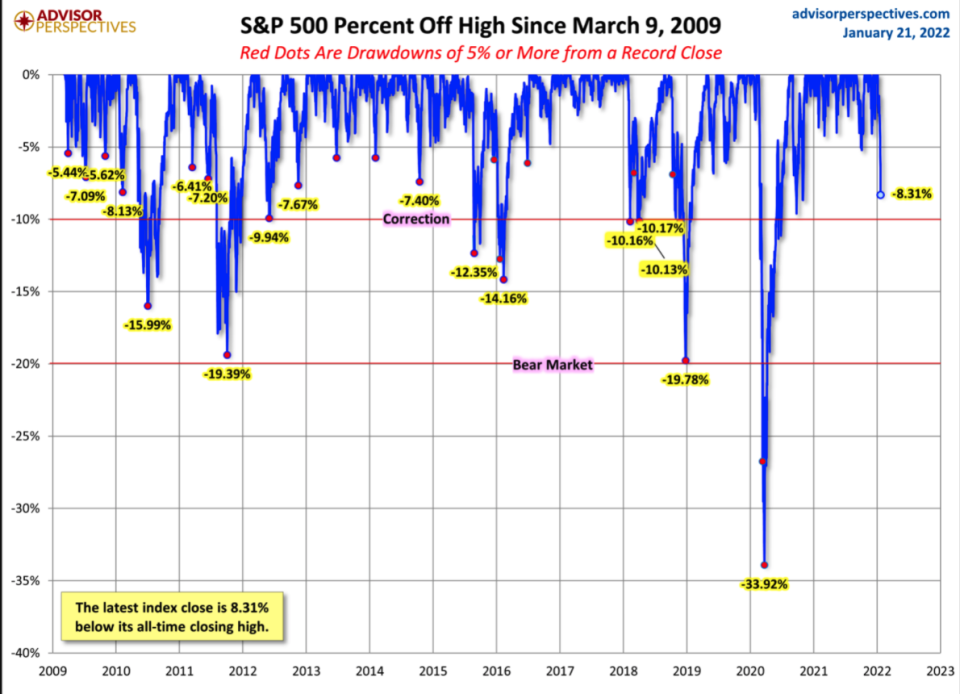 Hey, stocks are risky and don’t go up forever.

And lastly is this gem (reminder) from Renaissance Macro Research co-founder Eric Boucher. The S&P 500 is testing the 200-day moving average as Fed rate fears spread like a weed on trading desks. If it doesn’t hold, look out below. 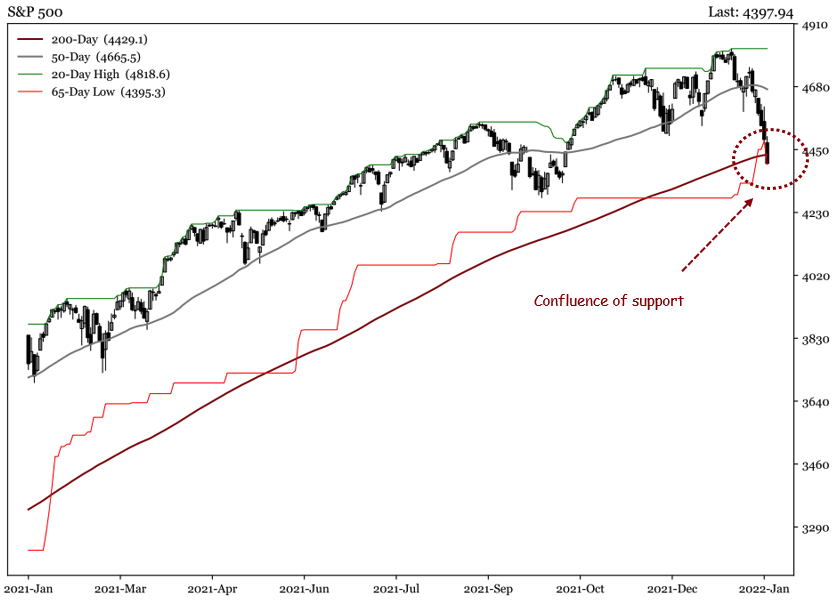 The year of the activist: Activist investors have come out swinging in 2022. The saga at Kohl’s is heating up and like I discussed on Yahoo Finance Live last week with Kohl’s activist investor Jonathan Duskin, the company’s complacent board can no longer run and hide from its poor track record on value creation. Late Friday, the take-no prisoners outfit Starboard (who ran successful activist campaigns at Darden and Papa John’s) reportedly offered $9 billion for Kohl’s (market cap as of Friday: $6.5 billion). A source familiar with the matter tells me Starboard is in play on Kohl’s.

On Sunday, it emerged that noted retail investor Sycamore (the secretive firm has acquired Staples, Express and others) reportedly is kicking the tires on Kohl’s. The interest comes amid pressure from Duskin and fellow activist Engine Capital. A source tells me Kohl’s is working with Goldman Sachs to consider its options. I expect this saga to come to a head before Kohl’s investor day on March 7 (if the event is held it at all).

Meanwhile, Peloton reportedly finds an activist investor knocking on its door after a major stock crash fueled by strong indications of mismanagement. Activist Blackwells Capital is pushing for Peloton to fire CEO, Chairman and founder John Foley and explore a sale, the WSJ reports. A Peloton spokeswoman declined to comment to Yahoo Finance on the matter. Myself and Julie Hyman just discussed on Yahoo Finance Live the potential for a Peloton activist to arrive. This may be a tough battle for Blackwells, seeing as Foley and other insiders have super voting shares. Nonetheless, it’s reasonable to expect a major shakeup at Peloton very soon.

And lastly, is long-time stock price laggard Unilever, which now reportedly is being attacked by Trian’s Nelson Peltz after a bungled acquisition by CEO Alan Jope. I have long covered Peltz’s work — the guy doesn’t mess around. Most recently, he drove major change at consumer products giant P&G that has unlocked massive value. Jope’s bungled deal plus a stock price that is only up 32% these past five years, versus 93% for the S&P 500 (and P&G up 86%) suggest Peltz has a strong hand here. Let the drama begin at the maker of Hellmann’s mayo.

Other business news: This will be the last year Lamborghini makes supercars that boast all-gas engines, the company’s CEO Stephan Winkelmann told Bloomberg. Gas-powered engines will be replaced by plug-in hybrids, then all-electric models by 2024. Sad day for car fans. CVS Health CEO Karen Lynch has done few interviews since taking the helm in February 2021, so it was good to read her chat with The New York Times. I found Lynch’s comments on worker wages to be 1) inflationary; 2) indicative of the margin pressures most retailers will be under in 2022. “It is a big challenge for us. We have increased our wages. We paid pharmacy bonuses in the past year. We’ve done big hiring days. But it is a constant balance and a constant battle,” Lynch said. If you woke up today and said “hey, I want to pick the bottom in cruise lines stocks like Carnival, Norwegian Cruise Line and Royal Caribbean,” then read this from CNN. The piece dives into the robust series of challenges the cruise lines are dealing with at this point in the pandemic. The takeaway: Full profit recoveries for the cruise lines won’t be happening in 2022, maybe not even 2023.

Brian Sozzi is an editor-at-large and anchor at Yahoo Finance. Follow Sozzi on Twitter @BrianSozzi and on LinkedIn.

Editor’s note: We want your feedback. Please take this quick survey to let us know if we should launch another newsletter. If the answer is yes, what type of content should the newsletter include?

What to watch today

Which beaten down stocks should I buy for the biggest long-term upside? Here are 3 high-growth tech ideas hitting fresh 52-week lows