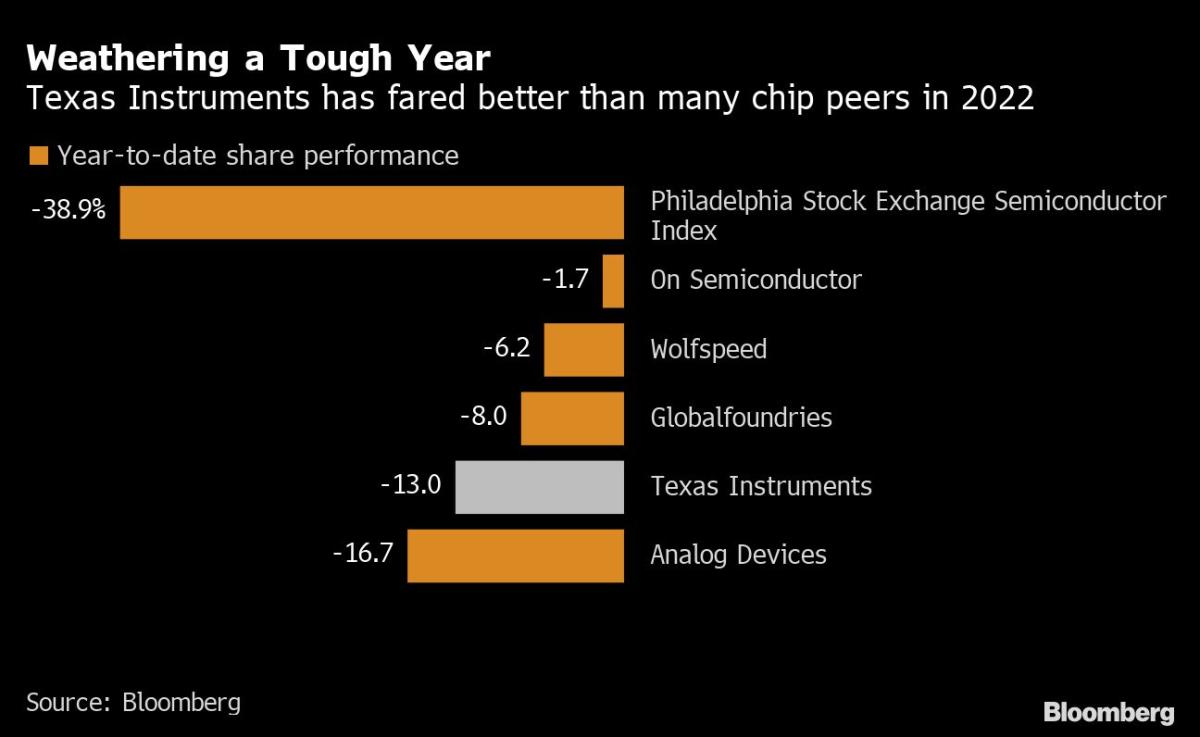 (Bloomberg) — Texas Instruments Inc., whose chips go into everything from home appliances to missiles, dropped as much as 6.1% in late trading after its quarterly forecast signaled that the semiconductor industry’s slump is spreading beyond computing and phones.

The company said Tuesday that it expects revenue of $4.4 billion to $4.8 billion in the fourth quarter, short of the $4.93 billion average estimate from analysts. Profit will be $1.83 to $2.11 a share, also missing projections.

While Texas Instruments has the largest customer list in the semiconductor industry — making its projections an indicator of demand across the economy — producers of cars and industrial machinery contribute more than 60% of revenue. Some industrial customers are now slowing their orders, joining makers of computers and phones in cutting back. But demand from the automotive market remains strong, the company said.

“During the quarter, we experienced expected weakness in personal electronics and expanding weakness across industrial,” Chief Executive Officer Rich Templeton said in the statement. Overall, orders have worsened and cancellations have increased as the current quarter has progressed, Texas Instruments said.

Many of the largest companies in the industry — Samsung Electronics Co., Intel Corp. and Nvidia Corp. among them — have warned that demand is dropping steeply. But investors have been hoping that the industry is nearing a low point.

Though the Philadelphia Stock Exchange Semiconductor Index lost 40% of its value in 2022, it climbed seven days in a row through Tuesday, suggesting that investors think the industry may have bottomed out.

Chief Financial Officer Rafael Lizardi said it’s impossible to say whether the current decline in demand is simply customers cutting back to reduce inventory or if there’s deeper concern about the economy.

Even when the economy is the steady, “you still have semiconductor cycles,” he said. “Over the last two years I wouldn’t be surprised if customers have built too much inventory. Now we’re going the other way.”

One of the pioneers of the chip industry, Texas Instruments is the largest maker of analog and embedded processing chips, which go into products as varied as factory equipment and space hardware. Such chips generally require less advanced production than Intel Corp. processors or other digital products. That focus has allowed Texas Instruments to become one of the most profitable companies in the industry and to devote its cash to dividends and share buybacks.

Texas Instruments’ management typically refuses to give predictions about future demand for electronics, outside of its basic forecasts. Executives have argued that, while there will always be fluctuations in the semiconductor industry, its chips have lasting value.

Unlike digital semiconductors such as microprocessors, Texas Instruments’ products take years to become obsolete, meaning that accumulating inventory in times of weaker demand isn’t the danger sign that it is for other chipmakers.

The company ended the quarter with $2.4 billion of inventory, up from $1.86 billion at the same point a year earlier. Lizardi said that increase still leaves the company with a smaller stockpile than it’s aiming for. Texas Instruments could further increase inventory by as much as a billion dollars.

Texas Instruments manufactures about 80% of its chips in its own factories, and the company is expanding that footprint. It has said that will result in higher levels of capital spending over the next couple of years, causing some analysts to express concern that the expenditures will crimp its budget for buybacks.

Unlike peers, Texas Instruments has no plans to reduce capital spending or slow the buildout of new plants, Lizardi said.