Every investor knows that the path toward profits lies in buying low and selling high. That’s a basic precept of any economic trading system. The trick, however, is recognizing when the stock is low enough to buy in. The prime moment to buy is when the stock hits bottom; that will maximize returns when the share price starts to rise again.

There are a multitude of possible clues investors can use to find the price bottom; today, we’ll be looking at insider buying trends.

Insiders – the corporate officers, board members, and others ‘in the know’ – don’t just manage the companies, they know the details. Legally, they are not supposed to trade that knowledge, or to blatantly trade on it, and disclosure rules by government regulators help to keep the insiders honest. Their honest stock transactions, however, can be highly informative. These are the people with the deepest knowledge of particular stocks. So, when they buy or sell, especially in bulk, take note.

As George Muzea, a former market advisor to George Soros, recently commented, after a career studying and investing in insider trades, “Insiders are basically value investors. They buy into price weakness…”

So let’s put this into practice. We’ve used the Insiders’ Hot Stocks tool at TipRanks to find stocks with recent ‘informative’ insider buys – and we’ve further sorted those to find three whose share price is beaten down. Let’s take a closer look.

We’ll start with Mersana Therapeutics, a clinical stage biopharma company focused on the development of antibody drug conjugates (ADCs) for the treatment of various cancers. These proprietary drug candidates take a highly targeted approach to defeating tumor growth, combining monoclonal antibodies with existing anti-cancer drugs. The result is a cancer drug that attacks specific antigens on tumor cell surfaces. One supposed advantage is a greater tolerability for patients.

However, in September of last year Mersana reported the second patient death in its ongoing Phase 1 clinical trial of upifitamab rilsodotin (UpRi). This drug candidate is a potential treatment for ovarian cancer – but the report of a second death – like the first, it was due to pneumonitis – spooked investors and the shares fell sharply. Over the past 12 months, Mersana stock is down 64%.

On the positive side, interim data from nearly 100 patients involved in the clinical trial showed a 34% objective response rate (ORR), a positive showing on a key metric for an early-stage trial.

The insiders are clearly focused more on UpRi’s potential. Andrew Hack, of Mersana’s Board of Directors, placed a major purchase this week, spending over $10 million to buy up 1,690,000 shares of MRSN.

Hack is not the only one bullish here. BTIG analyst Kaveri Pohlman notes that this company’s drug platform has a well-known safety profile, that increases tolerability of traditional anti-cancer drugs. Pohlman writes: “Mersana has what looks to be the safest payload technology, and we think the world is just starting to notice. Mersana’s safety profile allows it to combine its drugs with earlier line toxic chemotherapies that remain the SOC for most tumor types. This is important, as the cancer treatment landscape is getting more focused on combination therapies. Similarly, the immunosyn then technology (STING agonist delivering antibodies) looks promising, and the company probably receives little credit for this approach.”

Pohlman describes MRSN as a top pick for the year, and rates it a Buy. Her $26 price target implies an upside of 292% in the next 12 months. (To watch Pohlman’s track record, click here)

Overall, MRSN has picked up 6 reviews from the Street’s analysts and they break down to 5 Buys and a single Hold, for a Strong Buy consensus rating. The shares are currently trading at $6.63 and have an average price target of $22.67, for an upside of ~242% in the next 12 months. (See MRSN stock analysis on TipRanks) 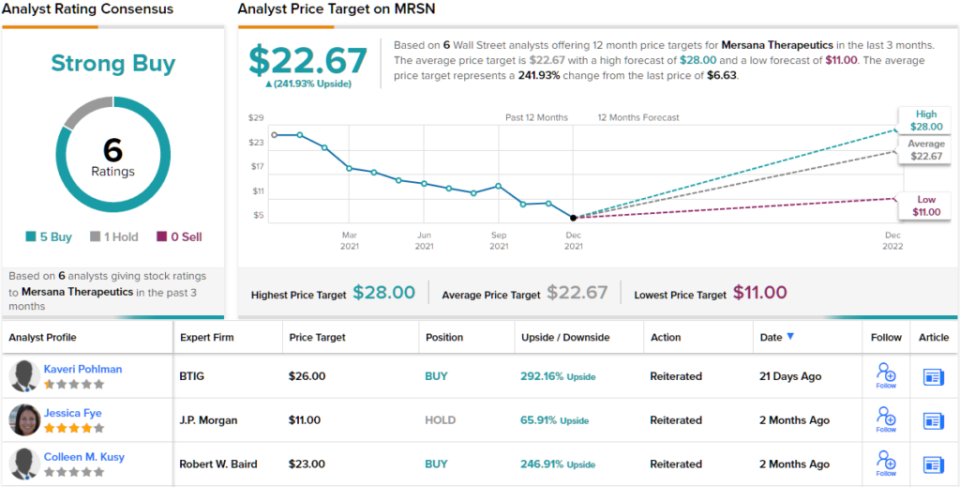 Some medical research companies take a narrowly focused approach, while others develop a broader research program. BridgeBio is one of the latter; it’s working on ‘breakthrough medicines’ for the treatment of genetic diseases with high unmet medical needs. The company was founded in 2015, but has already expanded its pipeline to 19 separate drug development programs. The pipeline is divided into several tracks, including precision oncology, precision cardiorenal, and gene therapy.

With so many pipeline programs, it’s no wonder that BridgeBio has multiple catalysts in the offing. First up is an initial proof-of-concept clinical readout from Ph1/2 trial of low-dose infigratinib, which is expected to occur in 1H22.

The second clinical trial to watch is the Phase 1/2 study of drug candidate BBP-631. This drug trial is testing a new treatment for congenital adrenal hyperplasia, or CAH, and the company is planning to release initial data from the trial by the middle of this year.

In other news, however, BridgeBio isn’t looking as rosy. The company recently reported results from the Phase 3 clinical trial of acoramidis, its leading drug candidate and a potential treatment for transthyretin amyloid cardiomyopathy (ATTR-CM). This data was eagerly awaited – but it disappointed. The data suggested that acoramidis did not improve patient outcomes – and that disappointment sent the stock plummeting.

BBIO shares had been slipping through the year, but after the acoramidis data release the shares tanked some 70%. Overall, in the past 52 weeks, the stock is down 77%.

While the shares are down, the insiders are making purchases. Of those purchases, three, by Board members James Momtazee, Brent Saunders and Fred Hassan, are considered informative. Last week, Momtazee spent $1.16 million on 80,000 shares, Hassan spent over $270,000 to buy 19,300 shares, while Hassan bought 17,600 shares for $254,848.

In coverage for JPMorgan, analyst Anupam Rama notes the company’s recent share price debacle, but adds that the upcoming catalysts are numerous.

“Looking forward, we see an interesting catalyst pathway but acknowledge that wins will have to be posted from the broader pipeline to shift sentiment. This, coupled with current valuation, forms the basis of our maintaining our Overweight rating.”

The Overweight (i.e. Buy) rating comes with a $36 price target, suggesting BBIO has room to grow an impressive 141% in the year ahead. (To watch Rama’s track record, click here)

Overall, it’s clear from the Strong Buy consensus rating that the Street’s stock pros have stayed calm on this one, even after the clinical trial disappointment. The 9 reviews here are all positive, giving the stock a Strong Buy consensus rating. Shares are trading for $16.31 and the $27.40 average target indicates room to run up another 83%. (See BBIO stock analysis on TipRanks) 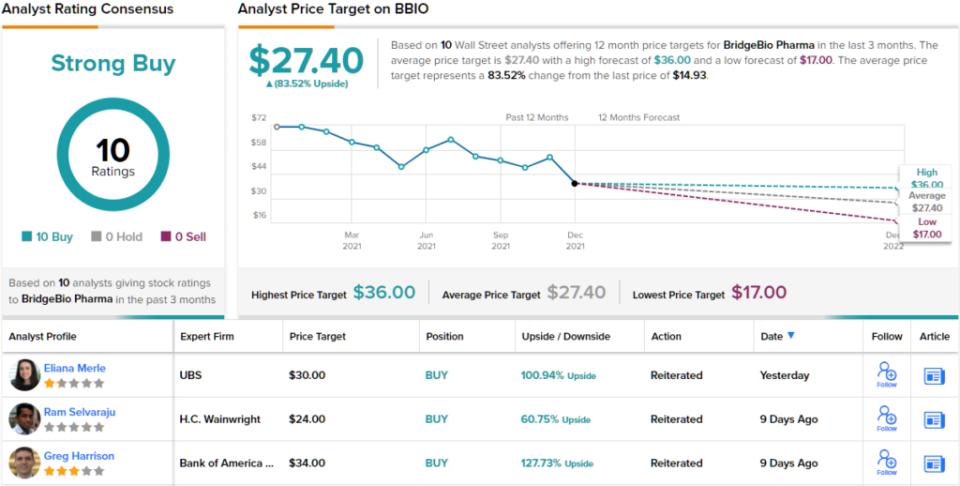 Last on the list, Reata Pharmaceuticals, is another clinical-stage biopharma researcher. Reata has two main research tracks, in the treatment of chronic kidney disease and of neurological disease, and each track features a separate drug candidate. Bardoxolone methyl is featured on the kidney track, while omaveloxolone is on the neurological track. Both drugs target the Nrf2 transcription factor, and have several affects on targeted cells, including restoration of mitochondrial function, reduced oxidative stress, and reduction of inflammation.

Reata’s stock took a hard hit recently. The stock is down 76% over the past year, and lion’s share of that came in the first and second week of this past December. The reason for that hit are worth a look.

The company had submitted its NDA to the Food and Drug Administration for bardoxolen methyl, based on a completed Phase 3 clinical trial. In December, the FDA’s Advisory Committee released its findings – with a unanimous 13-0 ‘no’ vote on the drug candidate. In the committee’s view, bardoxolone was ineffective at its targeted application, the treatment of chronic kidney disease due to Alport syndrome. The FDA’s final decision on approval of bardoxolone methyl is due on February 25, and while the agency is not bound by the Advisory Committee vote it does take it into account. This was a major setback for Reata.

It’s not, however, the end-all for the company. In November 2021, Reata received the FDA’s Fast Track designation for its other lead candidate, omaveloxolone, for the treatment of the neurological condition Friedreich’s ataxia. The Fast Track designation is intended to speed up the development and review process of new drugs. The company plans to submit the NDA for omaveloxolone in 1Q22.

5-star analyst Charles Duncan, in his coverage or RETA for Cantor Fitzgerald, points out that the FDA has left open the possibility of a new Phase 3 trial for bardoxolone, to address trial design issues brought up by the Advisory Committee, and that Reata’s omaveloxolone program remains on track.

“Some members of the AdCom expressed hope that there may yet be a path forward for bard’ in AS with a better designed trial and, perhaps, utilizing a precision medicine strategy which focuses on those patients that are younger, and with a lower baseline eGFR. To reflect this possibility, we retain a 15% probability of success in our bard’ market models and push out the expected commercial launch year to 2025 from 2022 in our US AS model, and to 2027 from 2024 in our ex-US AS model. We also point to omaveloxolone (omav’) in Friedreich’s ataxia (FA) as now the key contributor to our 12- month price target,” Duncan opined.

That price target, of $68, implies an upside of 140% in the coming year. Duncan rates the shares as Overweight, or a Buy. (To watch Duncan’s track record, click here)

Wall Street generally gives this stock a Moderate Buy rating, based on a 6 to 3 split among the recent reviews, in Buy versus Hold. The stock is selling for $28.32 and its $93.67 average price target – actually more bullish than the Cantor view – suggests a one-year upside potential of ~231%. (See RETA stock forecast at TipRanks) 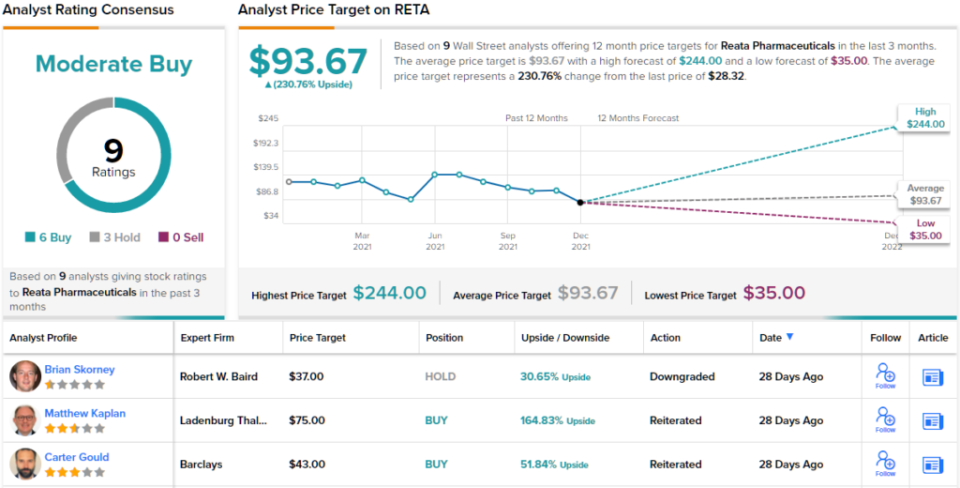 Be a landlord for Amazon and FedEx with these REITs that yield up to 4.1%