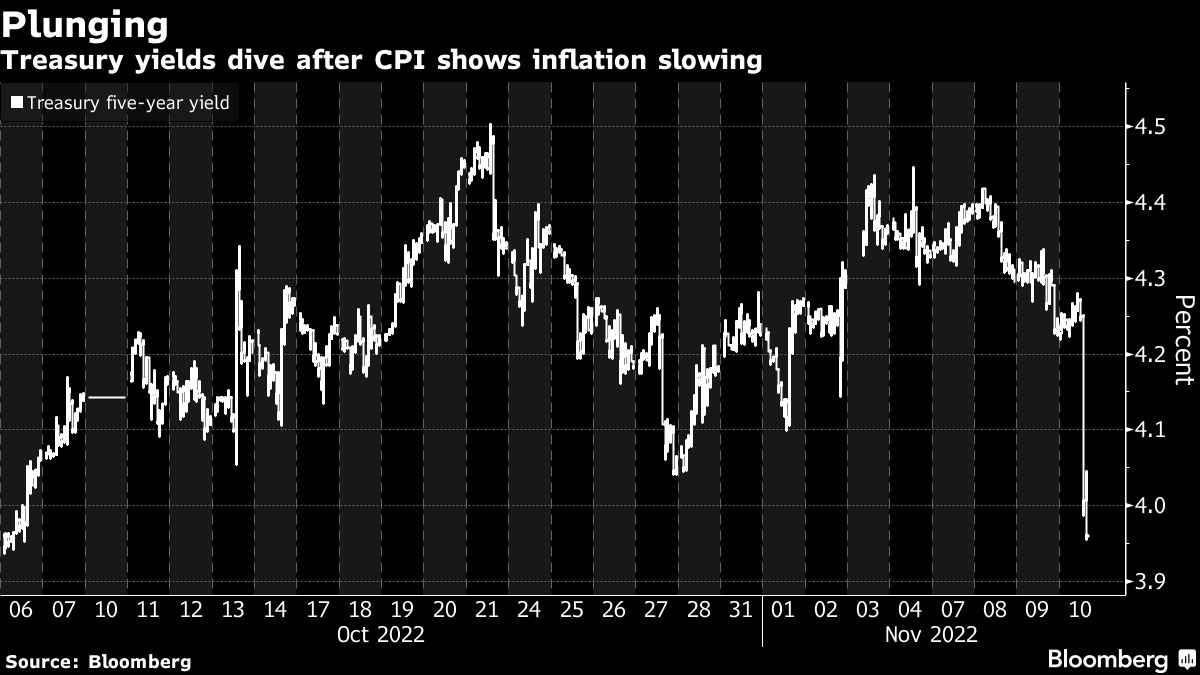 Stocks Spike by Most in Two Years on CPI Relief: Markets Wrap

(Bloomberg) — Stocks are headed for the best post-inflation day rally in more than a decade as slower-than-projected price growth sparked bets the Federal Reserve can downshift its aggressive rate-hike path.

More than 90% of stocks in the S&P 500 were swept up in the rally that left the benchmark poised for the best first-day reaction to a CPI report since 2008. The tech-heavy Nasdaq 100 surged the most intraday since April 2020. The relief rally helped crypto markets stabilize despite the turmoil surrounding crypto exchange FTX.

Treasuries soared across the board, sending the rate on two-year notes, more sensitive to monetary policy, down 28 basis points. Rates traders pared bets on Fed hikes, with swaps indicating now that a 50-basis-point increase in December is far more likely than a 75-basis-point move.

Headline inflation came in at 7.7%, the lowest since January, before Russia’s war in Ukraine pushed up commodity prices. More important for the Fed, the core measure that excludes food and energy slowed more anticipated.

“The first downside surprise in inflation in several months will inevitably be received by an equity market ovation,” Seema Shah, chief global strategist at Principal Asset Management, wrote. “A 0.5% hike, rather than 0.75%, in December is clearly on the cards but, until we have had a run of these types of CPI reports, a pause is still some way out.”

Fed officials appeared to back a downshift in rate hikes after a stretch of four jumbo-sized increases. They also stressed the need for policy to remain tight.

Dallas Fed President Lorie Logan said it may soon be appropriated to slow the pace to better assess economic conditions. San Francisco’s Mary Daly said the moderation was “good news,” but noted “one month of data does not a victory make.” She also said “pausing is not the discussion, the discussion is stepping down.”

Swaps markets pulled back bets on a peak rate to slightly less than 4.9% in the first half of next year, from more 5% before the CPI data.

“Today’s CPI report showed some moderate improvement as some of the previously elevated excessively high inflation-drivers, such as used cars, started to decline at a faster pace.”

“We are preparing for an environment where interest rates remain higher for longer. Investors should be more concerned with the effect that rising rates into a decelerating economy has on their portfolio values rather than the current level of inflation.”

“We expected that there would be deceleration of core goods prices, but seeing services slump too was a bigger bonus than any banker will get this year. That said, this won’t budge the Fed to rethink a 50bp hike in December, so traders curb their initial enthusiasm.”

“Hallelujah! We finally saw a strong beat in terms of inflation in the US. Both the headline and the core figures came lower than expected. And that helped softening the hawkish Fed expectations, pull the US dollar and the yields lower. The soft inflation has been a puff of fresh air for the entire market.”

“Pivot Party to start right now, short squeeze will ignite the rally. If the remaining cash comes to work we’ve seen the lows for a while.”

“Equities will love this and are likely to pick up the baton and keep running. Of course that may make the Fed uncomfortable at this early stage in the disinflation process and so watch out for Fedspeak if equities get too frothy.”