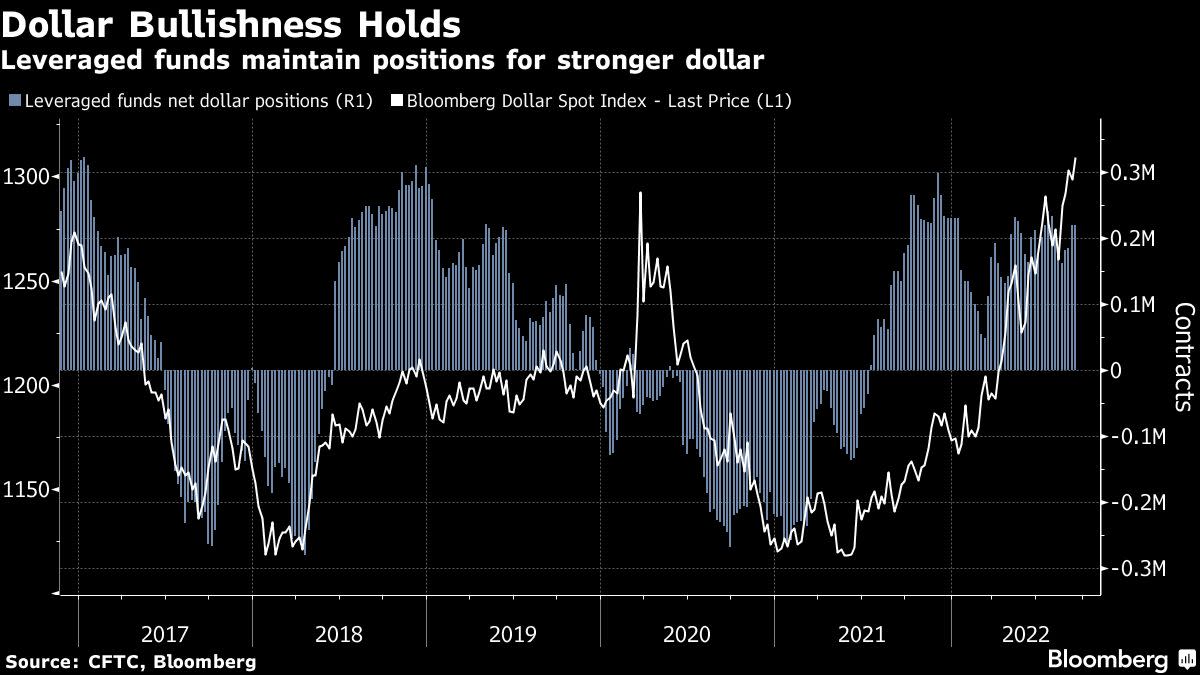 (Bloomberg) — Equities extended declines on Friday, with an index of global stocks on track for the worst week since June, while a gauge of the dollar soared to a fresh record, reflecting bets for outsize Federal Reserve interest rate hikes.

US futures dropped, suggesting the selloff that drove the S&P 500 index to its lowest close in about two months on Thursday isn’t over yet. Europe’s benchmark share gauge headed for a fourth day of losses, with real estate and miners leading a broad-based retreat. Stocks slumped in Japan, Australia and Hong Kong. Mainland China equities also fell, with little impact on sentiment from industrial production and retails sales data that beat expectations.

Policy-sensitive two-year Treasury yields extended a rise to the highest since 2007, deepening the curve inversion that’s seen as a recession signal. The latest US economic data painted a mixed picture for the economy that backed the view for hawkish monetary policy. Swaps traders are pricing in a 75 basis-point hike when the Federal Reserve meets next week, with some wagers appearing for a full-point move.

“Everything points to another 75 basis-point rate hike by the Fed when it meets next week. The likelihood that it will have to go ‘big’ again in November is elevated, too,” said Raphael Olszyna-Marzys, and economist at Bank J Safra Sarasin “What’s more, its new projections should indicate that the fight against inflation will be more painful than previously acknowledged.”

Adding to concerns about a slowing economy, FedEx Corp. withdrew its earnings forecast on worsening business conditions. The package-delivery giant flagged weakness in Asia and challenges in Europe as it pulled its prior outlook and reported preliminary results for the latest quarter that fell well short of Wall Street’s expectations. The conditions could deteriorate further in the current period, FedEx said.

European mail and parcel delivery companies took a hit, led by Deutsche Post AG, down as much as 7.6% to July 2020 lows.

Meanwhile, the offshore yuan remained on the weaker side of 7 to the dollar, even as the People’s Bank of China set the reference rate for the currency stronger-than-forecast for a 17th straight day.

Oil was poised to fall for a third week amid the deteriorating global economic backdrop, which has fueled demand concerns at a time when the buoyant dollar makes crude more expensive for most buyers.

2022-09-16
Previous Post: 4 Intellectual Property Mistakes Entrepreneurs Often Make
Next Post: How to Create a More Productive Culture in Your Business