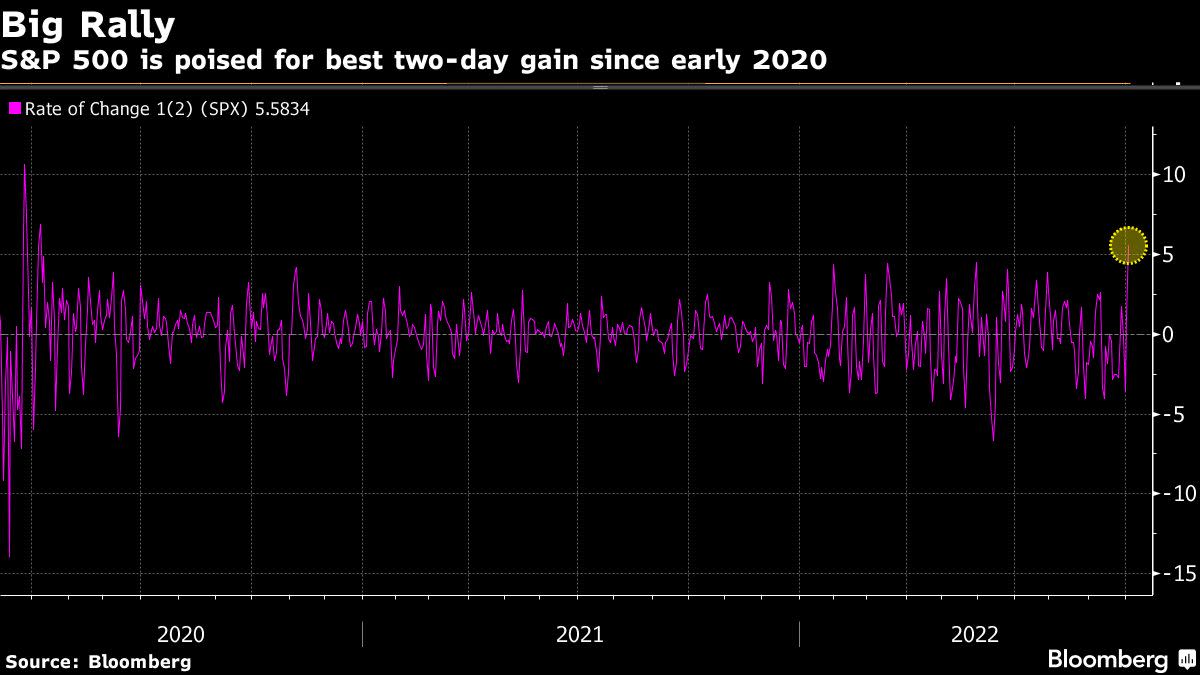 (Bloomberg) — One by one, short sellers are being forced to capitulate as market expectations grow for a slower pace of central bank tightening.

Whether in stocks or bonds, bearish bets are being dealt a blow as US data begin to reflect the fallout from the Federal Reserve’s aggressive rate hikes. A dovish pivot by the Reserve Bank of Australia on Tuesday is also fanning speculation that policy makers may be about to soften their hawkish stance.

Short sellers are being forced to fold during the best two-day equity rally in the US since April 2020, after raising bearish wagers in one of the longest stretches in years. While the latest revival in risk appetite has wrong footed the naysayers, some analysts, including Goldman Sachs Group Inc. and Bank of America Corp., say that the rout has yet to run its course.

“Investors are looking for any sign they can find that central banks will ease up on their tightening cycles,” said Lauren Goodwin, economist and portfolio strategist at New York Life Investments.

This comes after the S&P 500 climbed more than 2.5% for a second straight session. At the center of the rally are most-shorted stocks, as tracked by Goldman Sachs Group Inc., which jumped almost 6% as a group on Tuesday, handing losses for those who had placed bet against them.

The comeback in stocks, after the S&P 500 suffered its worst September in two decades, is also a headache for rules-based funds that had boosted bearish equity bets as volatility spiked and the market lost momentum. Trend followers like commodity trading advisors, for instance, last week saw their equity positioning approaching the trough observed at the height of the 2008-2009 global financial crisis, JPMorgan Chase & Co.’s data show.

“Shorts remain extreme from the CTAs to the hedge funds,” said Andrew Brenner, the head of international fixed-income at NatAlliance Securities.

While short sales have helped skeptics such as hedge funds fare better during 2022’s bear market, they at times became a source of stress when a sudden share rally forced a squeeze.

It isn’t just stock investors who have been caught out.

Hedge funds increased already elevated net short positions on US Treasuries last week, fueling a rout that sent 10-year yields to 4% for the first time in more than a decade.

The shift fueled a short squeeze price action, with US government bonds already under pressure amid thinning liquidity and fears of more outsized Fed rate hikes. The 10-year yield surged to the highest since 2008 last week, before tumbling back after the Bank of England resumed buying long-dated bonds.

Yields then fell further on Monday following a weaker-than-expected reading on a US factory gauge, and were down for a third day to 3.62% on Wednesday in Asia trading.

The equity bounce is also penalizing retail investors, who, based on JPMorgan estimates, last month dumped the most in single stocks in data going back to 2015.

Against this backdrop, firms from HSBC Holdings Plc to Credit Suisse Group AG are holding to the view that the S&P 500 Index may have yet to reach its ultimate low as US equity prices still don’t fully reflect the risks of higher interest rates on earnings and valuations.

Valuation risks for the benchmark index “will persist well into 2023, and most downside in the coming months will come from slowing profitability,” which threatens to push the S&P 500 as low as 3,200 in the fourth quarter, according to Max Kettner, HSBC’s chief multi-asset strategist.

2022-10-05
Previous Post: Level Up Your Brand Power By Hiring A Digital Agency
Next Post: How Long Will This SUCKERS Rally Last?