In December, we listed analysts’ favorite semiconductor stocks for 2022. That hasn’t turned out well.

But after chipmakers’ stocks have been hammered, the group is now trading at “normal-level valuations,” according to Matt Peron, director of research at Janus Henderson Investors. For long-term investors, it may help to see which companies in the sector are expected to grow most rapidly over the next two years.

Peron, in an interview, said one reason for this year’s decline for semiconductor stocks was that they had had a good, long run, stretching valuations. “Semiconductors are cyclical,” he said. In his role, Peron and his team provide advice to many portfolio managers, including those of the Janus Henderson Technology and Innovation Fund
JATIX,
-2.85%.

One of the biggest players, Intel Corp.
INTC,
-0.51%,
will publish second-quarter results on July 28 after the market close. Here’s a preview.

The stock-market benchmark for this corner of the technology sector is the PHLX Semiconductor Index
SOX,
-1.63%,
which is made up of 30 stocks of U.S.-listed makers of computer chips and related manufacturing equipment and is tracked by the iShares Semiconductor ETF
SOXX,
-1.67%.
This year’s action for SOXX looks ugly, when compared to the movement of the SPDR S&P 500 ETF
SPY,
-1.18%
:

The iShares Semiconductor ETF has fallen much further than the SPDR S&P 500 ETF has during 2022.

The above chart shows year-to-date total returns with dividends reinvested through July 26.

Peron said the bumpier ride for semiconductors resulted from “a combination of high valuations and, in part, the weight of the Federal Reserve coming down on the economy” with interest-rate increases to reduce inflation.

When asked about the chip shortage that has affected the auto industry and others, he said: “The demand can and will slow, given that there is a lot of inventory in the channel.”

Despite the semiconductor group’s greater volatility, it has performed much better than the benchmark has over long periods. Here are average annual returns:

Now look at this year’s movement of forward price-to-earnings ratios, based on weighted rolling consensus 12-month earnings estimates for the two groups: 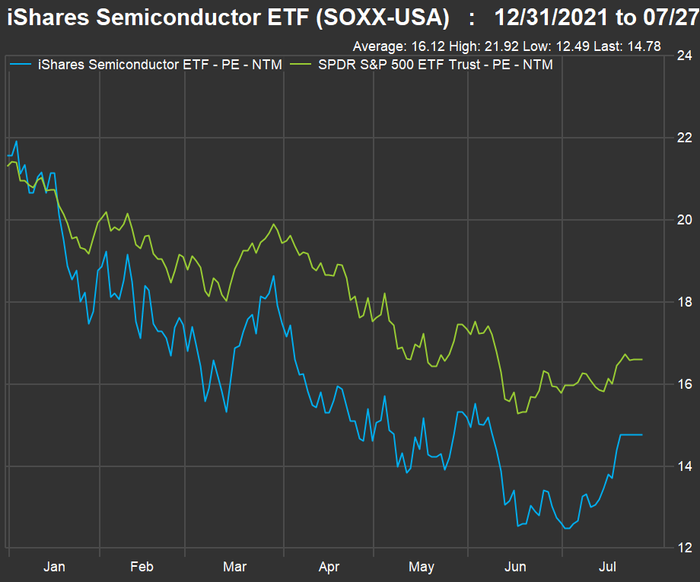 After beginning 2022 trading higher to forward earnings estimates than SPY did, SOXX now trades considerably lower than the benchmark.

Here’s a look at average P/E for the two groups over the past 10 years:

The semiconductors as a group are trading at a greater discount to the S&P 500 than has been typical over the past 10 years.

“ For investors with two- or three-year horizons, semiconductors may be a good way to allocate capital .”

Should the chip makers be trading at a discount to the S&P 500? Here are projected compound annual growth rates (CAGR) for sales, earnings and free cash flow (FCF) per share for the two groups through 2024:

The semiconductor group is expected to grow sales much more rapidly than the S&P 500. However, the full benchmark index is expected to show better earnings growth and a slightly better increase in free cash flow.

We looked within the S&P Composite 1500 because it screens-out newer companies that haven’t achieved consistent profitability. Standard & Poor’s criteria for initial inclusion in the index includes positive earnings for the most recent quarter and for the sum of the most recent four quarters.

Our initial group included 56 companies, which we narrowed to the 37 for which consensus sales estimates were available through 2024 among at least five analysts polled by FactSet. We used calendar-year estimates — some of the companies have fiscal years that don’t match the calendar.

Here are the 15 companies are expected to achieve the highest sales CAGR from 2022 through 2024:

Click on the tickers for more about each company.

You should also read Tomi Kilgore’s detailed guide to the wealth of information for free on the MarketWatch quote page.

Forward P/E ratios can be very high for some of these companies, such as WolfSpeed Inc.
WOLF,
-1.12%,
because of low near-term profit expectations. For the most part, the P/E ratios have declined considerably. A notable example is Nvidia, with a forward P/E of 28.5, compared with 58 at the end of 2021.

We have not included CAGR for EPS or FCF for the individual companies because low or negative numbers in the early periods can distort growth figures or make them impossible to calculate. So here are calendar-year EPS estimates and projected EPS CAGR for the group, if available:

Here is a summary of opinion among analysts polled by FactSet:

Musk Sells $6.9 Billion of Tesla Shares After Saying He Was Done

10 Stocks That Should Shine in a 2023 Recession, Citi Says