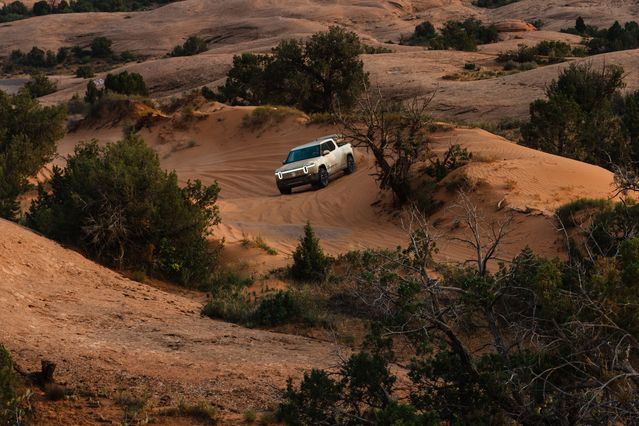 Prices for some Rivian vehicles and trim levels are rising up to 20%.

are rising to help the start-up offset higher costs. The direction of all car prices has been up in recent months, so a hike from another auto maker doesn’t seem like a surprise. Investors are reacting with nervousness anyway.


Dow Jones Industrial Average
were up 1.7%.

Prices for some vehicles and trim levels are rising up to 20%, according to reports that referenced an email sent to Rivian customers. What’s more, price increases appear to be impacting Rivian buyers with existing reservations. Rivian didn’t immediately respond to a request for comment about pricing actions.

The Rivian R1T launch edition trim remains $75,000, and the base R1T still lists for $67,500, noted Deutsche Bank analyst Emmanuel Rosner in a Wednesday note. “But many of the upgrades for the vehicles come at a considerable premium to the base options,” he added.

Rivian’s reported price hikes even drew a comment from

(TSLA) CEO Elon Musk. He responded to a tweet about the increases saying that Rivian’s “negative gross [profit] margin will be staggering.”

Most start-ups lose money early in their existence. Negative gross profit margins aren’t a surprise, but Musk added in a separate tweet that building expensive trucks is relatively easy, while achieving affordability is hard.

Price increases haven’t been confined to the EV space. The average transaction price for any new car in the U.S. topped $47,000 in 2021, up more than $6,000 from 2020. Inflation is part of the story, but so is low vehicle inventory and vehicle mix.

A global shortage of semiconductors constrained auto production, leading to strained new-vehicle inventories. The chip shortage also led car makers to favor their most-profitable products, which in the U.S. tend to be large trucks and SUVs, according to Benchmark analyst Mike Ward. Those vehicles carry higher sticker prices.

Rising prices will be a topic for investors and analysts when Rivian reports fourth-quarter numbers on March 10.

Rivian stock qualifies as one of those. Rivian’s market capitalization is $56 billion, about 19 times estimated 2022 sales of roughly $3 billion.