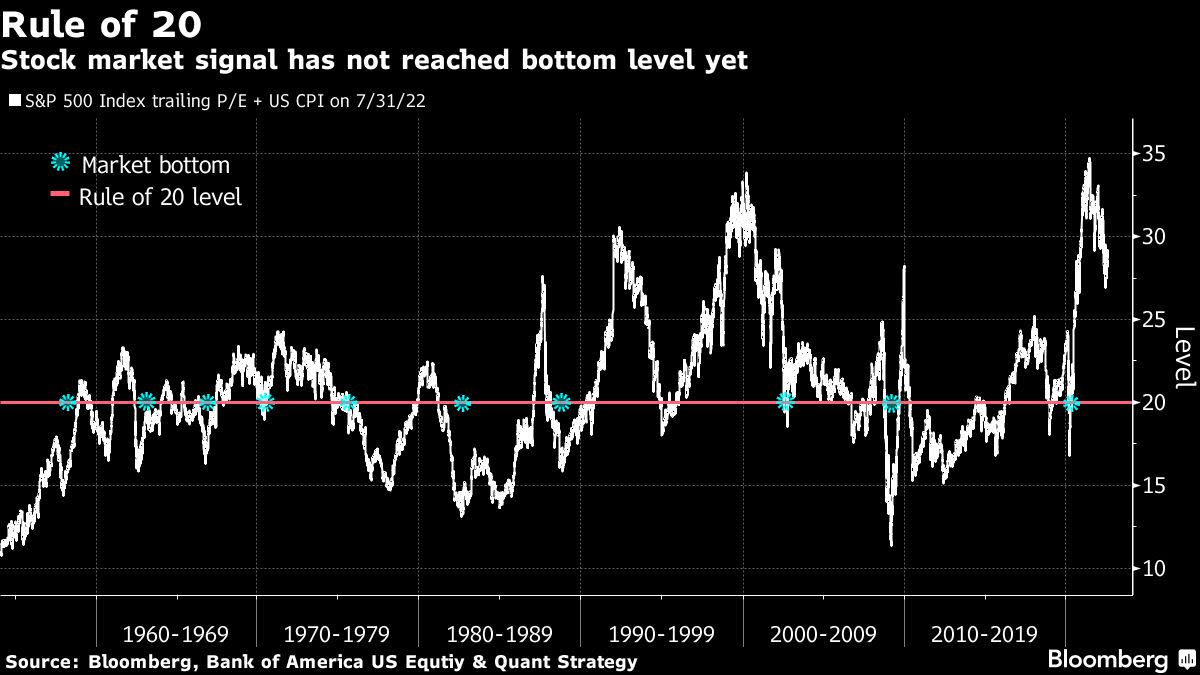 (Bloomberg) — It’s been a summer of love for both stocks and company bonds. But with fall nearing, equities are set to fade while bonds strengthen as central bank tightening and recession fears take hold once again.

After a brutal first half, both markets were primed for a rebound. The spark was lit by resilient earnings and hopes that a slight cooling in rampant inflation would get the Federal Reserve to slow the pace of its rate hikes in time to avert an economic contraction.

A near 12% advance in July and August has put US stocks on course for one of their best summers on record. And companies’ bonds have gained 4.6% in the US and 3.4% globally since bottoming out in mid-June. Having moved in tandem, the two are now set to diverge, with bonds looking better placed to extend the rally as the dash to safety in an economic downturn will offset a rise in risk premiums.

The economic outlook is once again cloudy as Fed officials have indicated they’re not keen to stop tightening until they’re sure that inflation won’t flare up again, even at the cost of some economic “pain,” according to Wei Li, global chief investment strategist at BlackRock Inc.

For government bonds, that means a potential flight-to-safety that would also benefit debt from investment grade firms. But for stocks, it’s a risk to earnings that many investors may be unwilling to bear.

“What we’ve seen at this juncture is a bear market rally and we don’t want to chase it,” Li said, referring to equities. “I don’t think we’re out of the woods with one month of inflation cooling. Bets of a dovish Fed pivot are premature and earnings don’t reflect the real risk of a US recession next year.”

The second-quarter earnings season did much to restore faith in the health of corporate America and Europe as companies largely proved demand was robust enough for them to pass on higher costs. And broad economic indicators — such as the US labor market — have held up strongly.

But economists forecast a slowdown in business activity from here on, while strategists say companies will struggle to keep raising prices to defend margins, threatening earnings in the second half. In Europe, Citigroup Inc. strategist Beata Manthey sees earnings falling 2% this year and 5% in 2023.

And while investors in Bank of America Corp.’s latest global fund manager survey have turned less pessimistic about global growth, sentiment is still bearish. Inflows to stocks and bonds suggest “very few fear” the Fed, according to strategist Michael Hartnett. But he reckons the central bank is “nowhere near done” on tightening. Investors will be scouring for clues on that front at the Fed’s annual Jackson Hole gathering this week.

Hartnett recommends taking profits should the S&P 500 climb above 4,328 points, he wrote in a recent note. That’s about 2% higher than current levels.

Some technical indicators also show the US stocks will resume declines. A measure from Bank of America that combines the S&P 500’s trailing price-to-earnings ratio with inflation has fallen below 20 before each market trough since the 1950s. But during the waves of selling this year, it only got as low as 27.

There’s one trade that could offer a big support to equities. The so-called growth stocks including technology behemoths Apple Inc. and Amazon.com Inc. have been seen as a relative haven. The group has led the recent stock rally, and strategists at JPMorgan Chase & Co. expect it to keep climbing.

In the bond world, the layers that make up a company’s borrowing costs look set to play into investors’ hands. Corporate yields comprise the rate paid on similar government debt and a premium to compensate for threats like a borrower going bust.

When the economy falters, these building blocks tend to move in opposite directions. While a recession will raise concerns about firms’ ability to repay their debt and widen the spread over safe bonds, the flight-to-quality in such a scenario will cushion the blow.

This benefit from falling government yields in case of a downturn particularly affects high-grade bonds, which are longer-dated and offer thinner spreads than junk-rated counterparts.

“There is a lot of risk around and it feels like the list is getting longer and longer but, on the other hand, if you are underweight and even out of the asset class, there is nothing more you can do,” said Hantel. “We have been getting more questions about investment-grade, which signals that at some point we should get more inflows.”

To be sure, the summer rebound has made entry points in corporate bonds less appealing for those brave enough to dive back in. George Bory, head of fixed income strategy at $476 billion money manager Allspring Global Investments and a bond evangelist in recent months, has somewhat tempered his enthusiasm regarding credit and rate-sensitive bonds as valuations no longer look particularly cheap.

Still, he holds on to the bullish views he first expressed earlier this summer after the bond selloff sent yields flying to levels that could even beat inflation.

“The world was becoming a more bond-friendly place and that should continue in the second half of the year,” he said.

2022-08-21
Previous Post: Choose Between In-Person and Online Meetings
Next Post: 4 Lessons Usain Bolt Can Teach Us About Personal Branding