E-commerce titan Amazon (AMZN) unveiled some pretty exciting innovations that could help it make a push toward the $2 trillion market cap mark — a level that was within reach less than a year ago.

Undoubtedly, Amazon Web Services continues to grow at a rapid rate. However, new services such as “Buy with Amazon Prime” open up the firm’s logistics and payments solutions to the world.

Shares have been treading water alongside the rest of the broader market of late. Retail could find itself on the receiving end as the consumer recession approaches. Still, it’s hard to count out one of the most disruptive forces in the tech scene, even if the macro picture isn’t looking too great.

Indeed, logistics can be an incredibly capital-intensive business. Over the years, Amazon has steadily made the right investments (including overspending in recent quarters) such that it’s now ready to offer storage and timely transport as a service.

Undoubtedly, Amazon could do to the logistics market what it did to the public cloud scene. In the beginning, Amazon was in-housing cloud for itself before opening up to the public.

I think “Buy with Prime” is a profoundly disruptive model that other retailers and Prime customers could embrace with open arms. Who wouldn’t want the convenience of two-day shipping and quick payments?

The service is a one-two punch in the gut to the many payments companies out there who can’t offer what Amazon can. Indeed, the number of payment buttons on commerce websites is growing, and promises of rapid delivery are key to winning the most clicks from shoppers.

It’s not just the expansion of Prime delivery to other websites that makes Prime one of the stickiest services out there. The number of perks seems to be growing, with Amazon recently taking a small stake in GrubHub alongside announcing the inclusion of one year of GrubHub+ for its Prime members in the U.S. market.

Amazon’s move into food delivery just makes sense. Over the next year, I think the food delivery market will feel the disruptive impact of the e-commerce behemoth.

Disrupting Markets That Are Ripe for Disruption

If there are economic profits to be had in a market where no single firm has formed a moat around its business, Amazon may swoop in like a hawk. Indeed, steep capital expenses are of no concern to the deep-pocketed behemoth that’s used size to its advantage better than most other firms.

The food-delivery market, physical retail, digital payments, and logistics are just some of the key areas that Amazon could thrive in as it leverages the powerful network effects from its Prime service.

As interest rates rise and investors become less willing to pay for firms that continue spending money to stay competitive, we could witness a more aggressive push by Amazon. If it sees an opportunity to give potential rivals, especially smaller ones, a squeeze, it will do so.

In a higher-rate environment, where money isn’t so easy, fortune could favor the behemoths like Amazon as they look to expand upon their disruptive capabilities.

By giving consumers a great value for their dollar, Amazon could make it out of any coming economic downturn far stronger than it entered.

Turning to Wall Street, AMZN stock comes in as a Strong Buy. Out of 39 analyst ratings, there are 38 Buy recommendations and one Hold.

Interestingly, AMZN has an 8 out of 10 Smart Score rating on TipRanks. This implies that it is likely to outperform the market going forward, which is in line with analysts’ bullish stance. 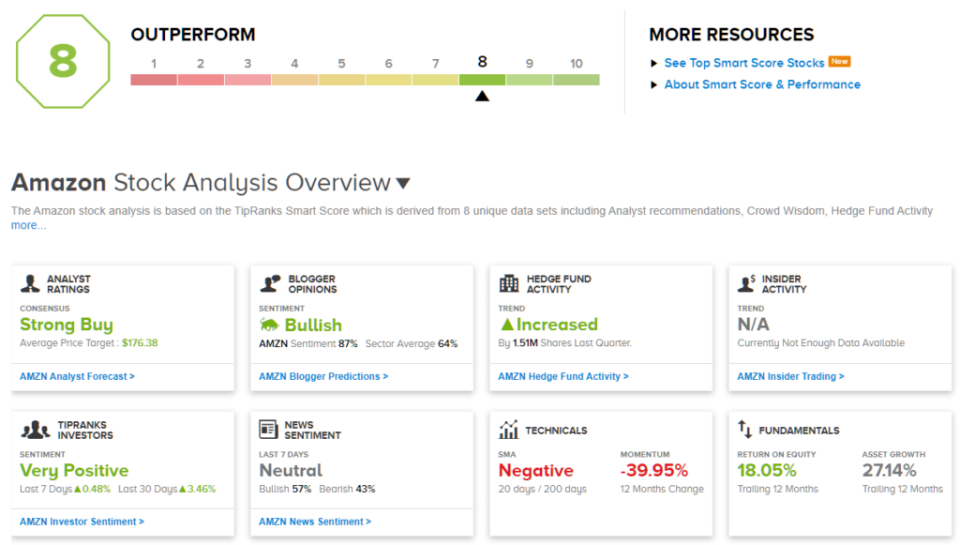 Amazon’s disruptive capabilities have not diminished. Though a recession could weigh heavily on coming quarters, Prime Day and other intriguing additions to the Prime service could help the firm continue to move forward, as most other retailers are set back.

It’s becoming increasingly difficult to keep up with the e-commerce kingpin. With rates on the rise and growth on the descent, expect Amazon to apply even more pressure to many market incumbents that can’t seem to form any sort of moat.

Amazon is putting its foot on the gas, and it’s not a mystery as to why Wall Street analysts have remained so incredibly bullish on the name despite the recent 40% slip in the stock.

Musk Sells $6.9 Billion of Tesla Shares After Saying He Was Done

10 Stocks That Should Shine in a 2023 Recession, Citi Says