Former US president Donald Trump gestures as he speaks, flanked by Texas Governor Greg Abbott, during a visit to the border wall near Pharr, Texas on June 30, 2021. (Photo by SERGIO FLORES/AFP via Getty Images)

Is this the revenge of Four Seasons Landscaping?

That was the worn-down venue in Philadelphia where Donald Trump’s lawyer, Rudy Giuliani, launched the doomed effort to block Joe Biden’s win in the 2020 presidential election. The Giuliani group meant to book the Four Seasons hotel, but somebody goofed and Giuliani ended up spouting his familiar election lies in front of an industrial garage door plastered with Trump signs. The Trump effort to overturn the election never got any more professional than that.

Trump’s new media company, called the Trump Media & Technology Group, may suffer the same amateurish delusions. An “investor presentation” the company recently filed with the Securities and Exchange commission is provoking guffaws among business analysts, with laughable evasions and barely any business strategy. “It does feel like every public action by this company is designed give the impression that it is a joke,” Bloomberg analyst Matt Levine wrote on Dec. 7.

The oddest part of the TMTG presentation is the “technology team” listed on Slide 21. The company has apparently filled 30 important jobs already, but it only lists these team members with a first name and last initial. The chief technology officer is “Josh A.” “Steve E.” is VP of engineering. One of the senior mobile developers is “BJ.” Are these real people or stand-ins? We may never know: As a footnote explains: “personnel subject to change.”

One key employee is very well known: Devin Nunes, the pro-Trump California Congressman who’s quitting his job in January to become CEO of TMTG, with Trump as chairman. Nunes has no business experience, except for fishy ties to a family farm. His social-media history is spotty. Nunes’ fealty to Trump spawned a parody account on Twitter called @DevinCow, prompting a lawsuit by Nunes, seeking to shut it down. He lost last year, and started urging his followers to join Parler, a conservative version of Twitter. But Parler would compete with Trump’s platform, if it ever materializes.

[Click here to get Rick Newman’s stories by email.]

As a Republican, Nunes faces a tough re-election battle in a district that’s growing more liberal. So joining Trump’s company now may have been better than losing in 2022. But working for Trump has obvious risks, as the New Yorker pointed out in a piece of satire speculating that Trump will stiff Nunes as he has done with many contractors and investors in his years as a real-estate developer. Maybe it’s not satire.

The Trump company is a serious venture with real money at stake. TMTG has plans to merge with a special-purpose acquisition company, or SPAC, called Digital World Acquisition Corp., which has raised roughly $1 billion for the deal. Normally, a public company would disclose who its investors are, which DWAC will have to do at some point. For now, however, those investors are anonymous. Two hedge funds that invested in DWAC before knowing of the Trump merger pulled their money in October after news of the deal broke. 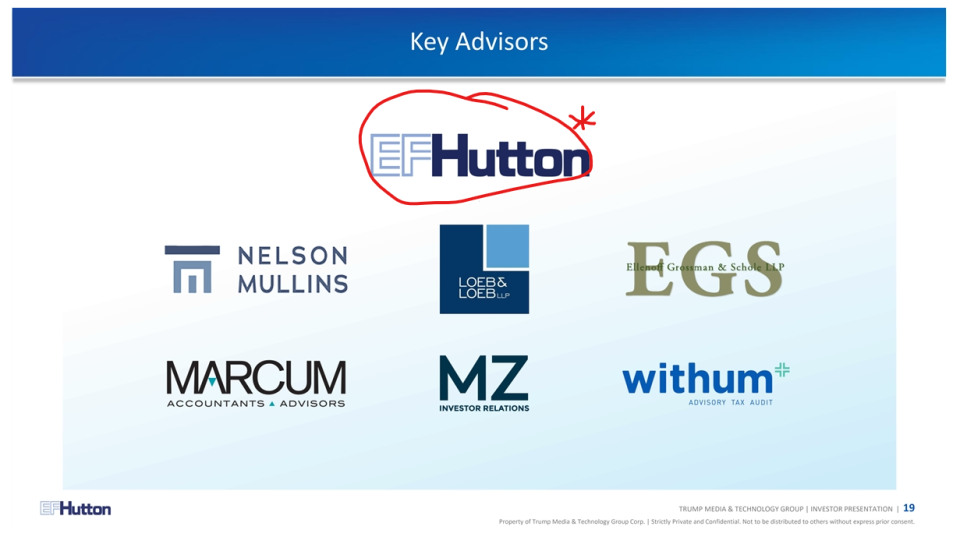 The TMTG-DWAC tie-up is already in a bit of trouble. Donald Trump met with Patrick Orlando, DWAC’s chief executive, early in 2021, before DWAC had raised money as a SPAC and gone public in a September offering. If they discussed the very deal that happened, that would violate the rules for SPACs, which aren’t supposed to have a specific target company in mind when they raise funds. The Securities and Exchange Commission is investigating and could issue fines or sanctions, or find no wrongdoing at all.

Assuming the merger goes through, it will allow DWAC investors to buy shares at a discount to the market price, then sell them right away, essentially guaranteeing a profit. But that isn’t necessarily good for the stock, or the company. Investors who want to cash out right away—and have negotiated the right to do so—have no stake in the prospects of the business itself. The investors might even think the real opportunity is cashing in on the initial hype, rather than longer-term profitability.

The TMTG investor presentation is vague about how exactly the company will make money. It points out that Trump’s following on Twitter before the platform banned him in 2020—89 million followers—is more than one-third of Netflix’s entire subscriber base, as if TMTG could rival Netflix out of the gate. But that’s apples and oranges. One account on Twitter—free to the account holder and followers alike—is nothing like a Netflix account in which users pay a monthly fee to access a deep library of content. 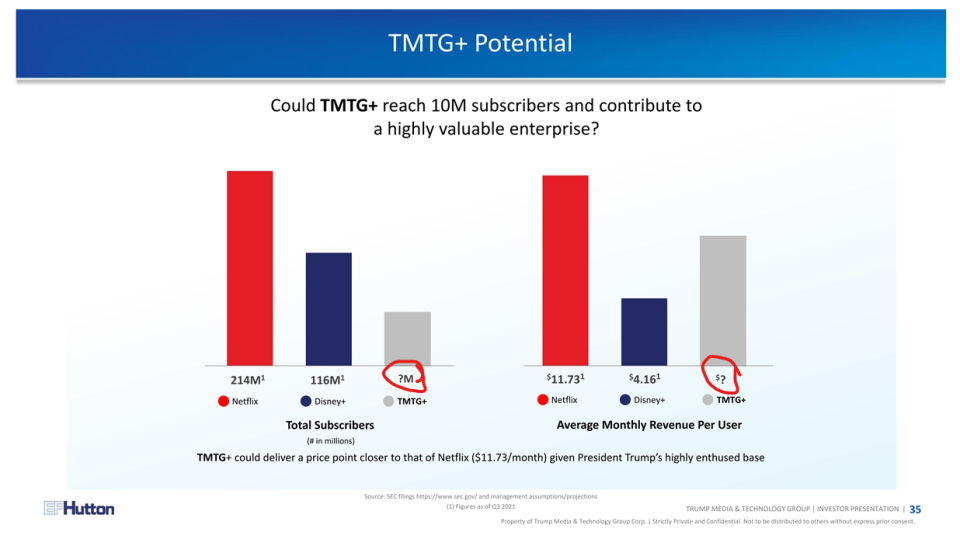 Other oddities abound. A forecast for the number of monetizable users—81 million by 2026—is based on a Morning Consult poll rather any internal analysis. Other forecasts, for subscriptions and revenue, are represented by question markets rather than the actual numbers (even if inflated) found in most business proposals. The “key advisor” whose logo appears on every page is EF Hutton. But this isn’t the storied brokerage firm. It’s a reboot of a brokerage named Kingswood Capital Markets that dates all they way to 2020 and recently bought rights to the EF Hutton name. Apparently the gambit worked.

Trump fancies himself a business icon, even though his current company is under investigation for fraud. His business history includes 6 bankruptcies and several thousand lawsuits. Trump’s real success came as a reality-show entertainer flacking a gilded lifestyle, not as a builder or dealmaker. His latest company may find a way to convert Trump’s jocular mendacity into steady profits, but it might also become little more than a Trump fan club that amuses outsiders who occasionally peek inside the fence.

Rick Newman is the author of four books, including “Rebounders: How Winners Pivot from Setback to Success.” Follow him on Twitter: @rickjnewman. You can also send confidential tips.

Intel Is Left Behind as Chip Stocks Roar Back

Here’s Why Cathie Wood Dumped It