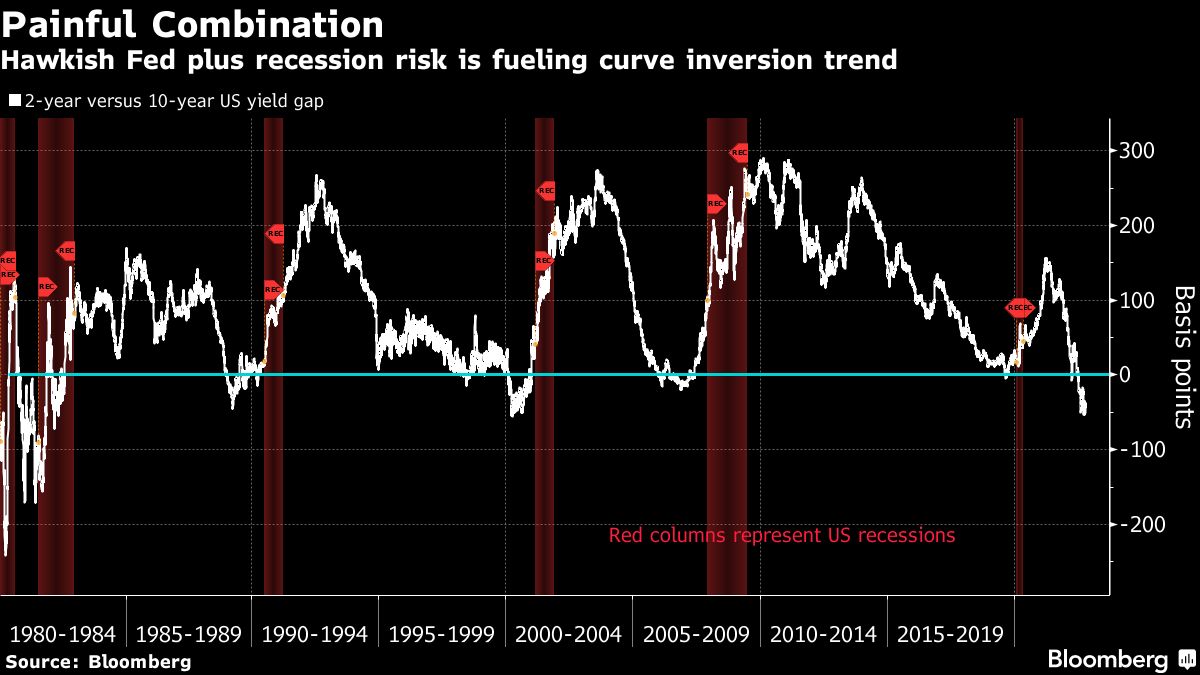 Peak in Bond Yields That Appeared Close Has Vanished From Sight

(Bloomberg) — All bets appear to be off on how high yields can rise in the world’s biggest bond market.

While only the two-year reached a new multiyear high this week — on Friday after October labor market data were stronger than expected — more bloodletting seems inevitable in the Treasury market.

Federal Reserve Chair Jerome Powell reiterated on Wednesday, after the central bank’s sixth policy rate increase this year, to a range of 3.75% to 4%, that there’s no end in sight as long as inflation stays elevated. Swaps traders responded by pricing in a peak rate higher than 5%.

“The data needs to be very bad to shift the Fed from their current path,” said George Goncalves, head of US macro strategy at MUFG. So “the risk/reward profile for, and the skew for the bond market, has shifted to one of further weakness.”

For the moment, investors remain convinced that the Fed is on a course that ultimately will bring the economy to its knees. That’s apparent in the difference between two-year and longer-maturity Treasury yields.

The two-year exceeded the 10-year Treasury yield by as much as 62 basis points this week, the deepest inversion since the early 1980s when then-Fed Chair Paul Volcker was relentlessly raising rates to rein in hyper inflation. Curve inversions have a track record of preceding economic downturns by 12 to 18 months.

The inversion has scope to increase to as much as 100 basis points if the market starts pricing in a terminal rate of 5.5% in response to future inflation readings, Ira Jersey, chief US interest-rate strategist at Bloomberg Intelligence, says.

“Now it’s about the ultimate destination” of the policy rate, said Michael Gapen, head of US economics at Bank of America Corp., whose forecast for the terminal level is a range of 5%-5.25%. “The risk is they ultimately have to do more than we are all thinking and it takes longer to get inflation under control.”

Money-market traders remain split over whether the Fed’s next meeting in December will result in a fifth consecutive three-quarter-point rate increase or a smaller half-point move. Powell this week reiterated that the pace of increases is likely to slow at some point, possibly as soon as in December. But with inflation data for October and November slated for publication in the interim, it’s too soon to say.

October consumer prices on Thursday are expected to show deceleration. The 6.6% year-on-year increase in prices excluding food and energy in September was the biggest since 1982, and it pushed the expected peak in the Fed’s policy rate above 5% for the first time.

The inflation data should dominate a holiday-shortened week in which there may be upward pressure on yields from the resumption of Treasury debt sales including 10-year and 30-year new issues. The auctions, also including a new 3-year note, are the first in a year not to have been reduced in size from the most recent comparable ones.

The Bloomberg US Treasury index has lost nearly 15% this year. With stocks also battered in 2022, investors in the popular 60/40 split between equities and high-quality bonds have lost about 20%, according to a Bloomberg index.

“We are bullish on fixed income,” said Gene Tannuzzo, global head of fixed income at Columbia Threadneedle Investments. “There has been an important reset for the asset class, especially if yields can rest at a higher level. A lot of tightening is priced in.”