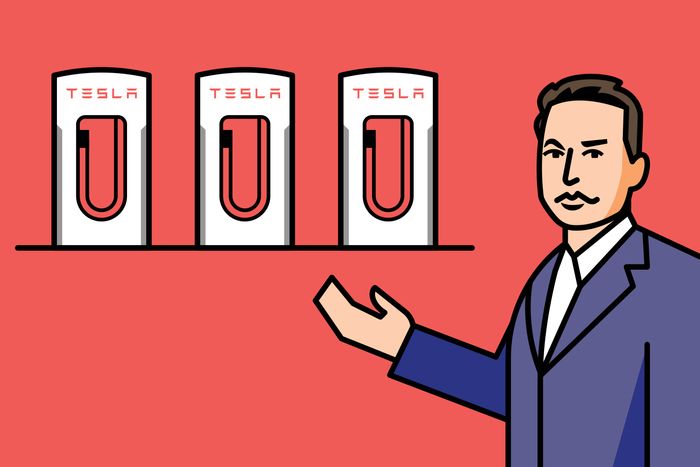 This past Wednesday, Elon Musk tweeted that

would open up its global network of 25,000-plus chargers to non-Tesla electric vehicles. That might seem strange, even for Musk. But it could also be savvy. “It’s brilliant,” Gary Black tells Barron’s. Former Wall Street analyst and executive Black has amassed 80,000

followers for his views on stocks, including Tesla, which he owns shares in. “We like the move,” adds Wedbush analyst Dan Ives, also a Tesla bull. He rates the stock a Buy, with a $1,000 price target. “While some will view it as letting competition in on Tesla’s supercharger moat, we disagree…”

For all the competition between their makers, EVs account for less than 5% of all new cars sold in the U.S. The larger struggle remains between electric- and gasoline-powered vehicles. Anything Musk does to make buying electrics easier is good for Tesla. Besides, Tesla could make a lot of money by opening its network. Although Tesla didn’t respond to a question about potential pricing, charging won’t be free, and refusing to let others use the system would be like a gas station only servicing Fords. And charging eventually will be as ubiquitous as gas stations.

Then there’s the free publicity and advertising. Opening up the charging network shows Tesla is interested in overall EV adoption and not just in selling its own vehicles. That’s positive for the brand. And it means that thousands of EV buyers will be pulling up to a Tesla logo, again and again.

Investors brushed off the tweet. Tesla closed at $643.38 Friday, basically flat on the week, with earnings ahead. That’s probably right. For now, charging-for-all will probably matter more at the margins.

will release quarterly results. The three companies are among the five largest globally by market value, worth a combined $6.4 trillion.

The Conference Board releases its Consumer Confidence Index for July. Consensus estimate is for a 124 reading, lower than June’s 127.3. The June figure was the highest for the index since the beginning of the pandemic.

S&P CoreLogic releases its Case-Shiller National Home Price Index for May. Expectations are for a 16.4% year-over-year rise, after a 14.6% jump in April. The April spike was a record for the index going back to 1988, when data were first collected.

The Federal Open Market Committee announces its monetary-policy decision. The FOMC is expected to leave the federal-funds rate unchanged near zero. Wall Street expects the central bank to announce a timeline for reducing its bond purchases, currently about $120 billion a month, at some time between now and the September meeting.

Robinhood Markets, the zero-commission investment app, is expected to begin trading on the Nasdaq exchange under the ticker HOOD. Robinhood plans to offer 55 million shares at $38 to $42 a share, which would value the company at roughly $35 billion.

The Bureau of Economic Analysis reports its preliminary estimate of second-quarter gross domestic product. Economists forecast a 9.1% seasonally adjusted annual growth rate, following a 6.4% increase in the first quarter. The Federal Reserve currently projects 7% GDP growth for 2021, which would be the fastest rate of growth since 1984.