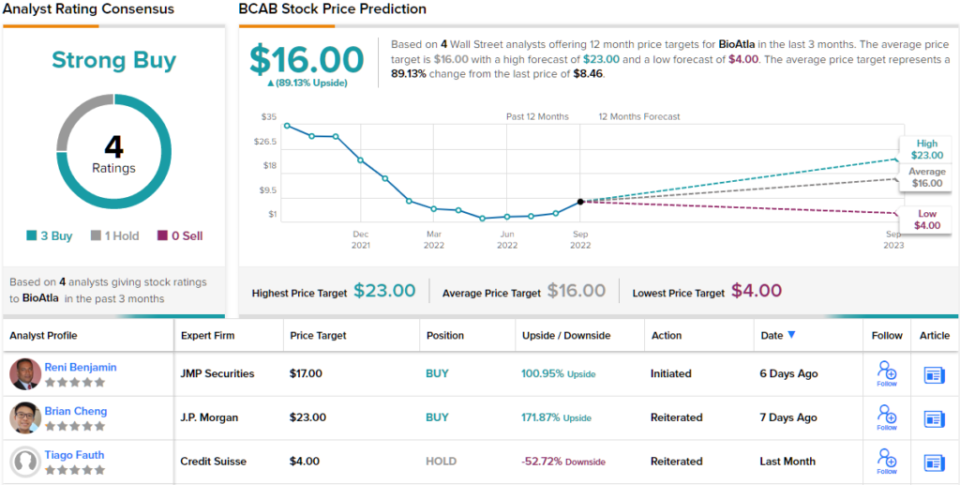 A strong bearish trend defined the markets in the first half of the year; since then, the key point has been volatility. Stocks hit a bottom back in June, when the S&P 500 dropped into the 3,600s. That has proven to be a support level in the last three months, and at least one strategist believes that the market won’t go much lower from here.

JPMorgan global market strategist Marko Kolanovic is taking a guardedly optimistic view of the coming year, noting: “We believe that any downside from here would be limited given: 1) better than expected earnings growth and signs revisions may be bottoming, 2) very low retail and institutional investor positioning, and 3) declines in longer term inflation expectations from both survey- and market-based measures.”

The stock analysts from JPMorgan are going forward on that thesis, and have picked out 3 stocks which they see poised for solid upside potential in the coming year. We ran them through TipRanks’ database to see what other Wall Street’s analysts have to say about them. Let’s take a closer look.

We’ll start in California, where BioAtla, based in San Diego, is a clinical-stage biopharmaceutical company focused on the development of novel monoclonal antibody and cell-based therapeutics for use in the treatment of various cancers. The company is developing its drug candidates through a proprietary platform, Conditionally Active Biologics (CAB), and is seeking ways to selectively target cancer cells and tissues, even when they are embedded in normal tissue.

BioAtla’s pipeline includes both preclinical and clinical stage tracks. The two leading programs are both in Phase II testing. Mecbotamab vedotin, or BA3011, is under investigation as a treatment for non-small cell lung cancer, with interim data expected in 4Q22. The drug is also being tested in the treatment of undifferentiated pleomorphic sarcoma (UPS) and osteosarcoma; part 2 of a Phase II study is being prepared, with enrollment expected to begin before the end of this year.

The company’s second leading drug candidate is ozuriftamab vedotin, BA3021. This drug is undergoing Phase II studies in the treatment of squamous cell carcinoma of the head and neck as well as non-small cell lung cancer – for which an interim update is expected in 2H22. The company also expects to start enrolling patients in a melanoma study in the fourth quarter of this year.

JPMorgan’s Brian Cheng has been covering this biopharma firm, and sees the flurry of upcoming updates as the key point. He writes, “The sentiment around its pipeline has drastically shifted as investors begin to appreciate its prospect in an attractive piece of the NSCLC market for the AXL-targeted lead asset, BA3011… We believe the current valuation remains disconnected from what its conditionally active biologic (CAB)-based technology and the rest of the pipeline could offer. The catalysts in the remainder of 2022, notably the interim reads from BA3011 and BA3021 in AXL+ NSCLC and ROR2+ NSCLC, respectively, will continue to keep investors engaged and hold meaningful upside potential.”

To this end, Cheng sets an Overweight (i.e. Buy) rating on BioAtla shares, with a price target of $23 to suggest a robust one-year upside of ~172%. (To watch Cheng’s track record, click here)

Small-cap biotech firms don’t always get a lot of attention from Wall Street, but four analysts have sounded off on BCAB – and their reviews include 3 Buys against 1 Hold, for a Strong Buy consensus rating. The shares are trading for $8.46 and the average target of $16 implies an 89% gain in the next 12 months. (See BCAB stock forecast on TipRanks)

In business for nearly 50 years, Sterling Check is a leader in the global market for background checks – not the financial instruments, but the workaday grind of conducting background searches on job applicants. The company serves a wide range of industries, including construction, tech, government, financial services, manpower recruitment, with services that include everything from driving record checks to general background to criminal records to credit reports. Sterling will also conduct social media checks.

Sterling uses cloud-based technology that allows it to tailor its services to any scale. The company boasts over 50,000 global clients, including more than half of the Fortune 100 companies. Sterling conducts over 95 million checks every year, and is based in New York City.

Last month, Sterling released its financial results for 2Q22, showing $205.6 million at the top line. This was a 29% gain year-over-year. Adjusted earnings grew even faster, by 43% y/y, to reach $32.5 million, for an adjusted EPS of 33 cents per diluted share. The EPS was up 32% from the year-ago quarter.

Also in the Q2 report, Sterling updated its full-year guidance on revenues, bumping the forecast up $15 million at the midline to the range of $785 million to $795 million. Achieving this will give y/y top line growth of 22% to 24%.

Analyst Andrew Steinerman, in his coverage of Sterling for JPMorgan, writes of the company, and its positioning within the industry: “A key differentiator driving this still-rapid revenue growth is the contribution from new client wins (i.e., “new logos”) of +12% in 2021 and +10% in 1H22… We do think investors have assessed background screeners’ strong recent growth to be mostly cyclical, and that the onus is on the companies to prove they can compound on top of strong recent growth. That said, we recognize that Sterling has increasingly demonstrated strong execution over factors within its control and continues to gain market share…”

“We expect larger providers such as Sterling to continue to win market share based on technology-enabled client fulfillment, improved turnaround, and accuracy from automation, excellent customer service, and the ability to conduct checks globally,” the analyst summed up.

In Steinerman’s view, tall the above justifies an Overweight (i.e. Buy) rating, and he puts a price target of $27 on the stock, suggesting a 32% one-year gain. (To watch Steinerman’s track record, click here)

Once again, we’re looking at a stock with a Strong Buy rating from Wall Street’s consensus. That rating is based on 6 recent analyst reviews, including 5 to Buy against 1 to Hold. The average price target of $26.75 indicates potential for 31% upside from the current share price of $20.39. (See STER stock forecast on TipRanks) 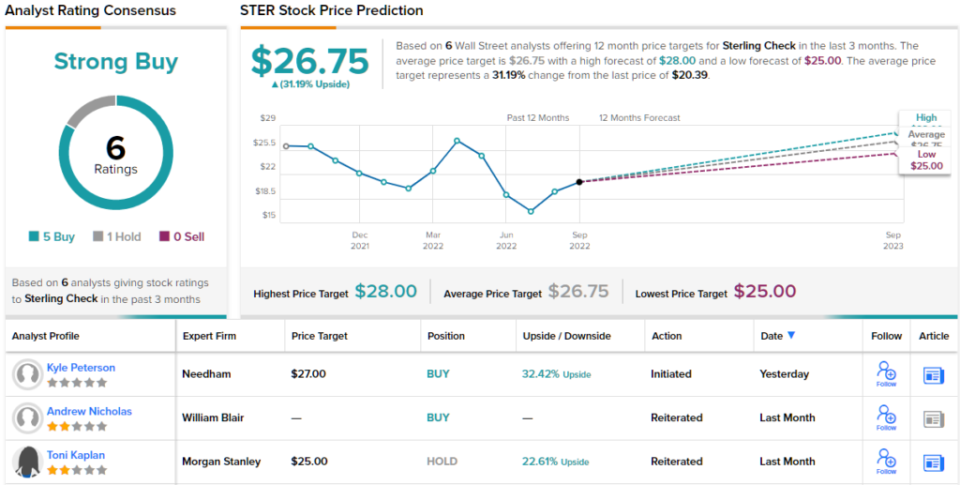 No matter where you go or what you do, you can’t escape pop culture – and Funko is part of the reason why. This company manufactures and distributes collectibles, the sort of fun pop-culture stuff that gets sold on license. We’re talking about bobble-head dolls and vinyl figurines, action figures and retro throwbacks, all branded by such icons as Marvel and DC Comics, Harry Potter, the NBA, and Disney. Funko products can be found worldwide or ordered online, making the company a leader in pop culture lifestyle branding.

By the numbers, Funko has some interesting and impressive stats to share. The company boasts that it has over 1,000 licensed properties with more than 200 content providers, and has sold over 750 million products since 1998. The company can get a new item into production just 70 days from the concept, and saw well over $1 billion in sales last year.

Funko is on track to beat that annual sales number this year. The company saw $315.7 million in revenue for 2Q22; add to that the $308 million from Q1, and 1H22 has generated well over half of last year’s total. Despite strong revenues, Funko’s earnings per share have been dropping off. Adjusted EPS was reported at 26 cents in 2Q22, compared to 40 cents in the year-ago quarter. At the same time, the EPS beat the 23-cent forecast by 13%.

In a move of importance to investors, Funko acquired the Texas-based collectible company Mondo earlier this year. The move gives Funko a higher-end presence in the industry; Mondo is best known for limited edition vinyl records and screen-printed posters. The companies did not disclose details of the agreement, but Funko does not expect it to impact financial results in 2022.

So, overall, Funko is in a sound position – and that soundness has caught the eye of JPM analyst Megan Alexander, who says, “On the stock, while it has recovered somewhat from the lows following the recent pullback, it remains attractively valued (10x P/E and 6x EV/EBITDA on our 2023 forecast) while we continue to see upside to 2022 and 2023 consensus estimates. Moreover, the company effectively de-risked the 2023 guide while we view the topline outlook conservatively given M&A potential (which is not included in the current targets). While we believe investors remain skeptical of the hockey-stick margin recovery in 2H22 (and the roll to 2023), we continue to expect gross margin to flip to positive in 3Q after 4 quarters of declines, which should provide a catalyst for upward earnings revisions.”

Alexander goes on to give FNKO a rating of Overweight (Buy), plus a price target of $32 to indicate potential for ~42% upside on the one-year horizon. (To watch Alexander’s track record, click here)

This funky toy maker has picked up 7 recent analyst reviews, and these include 5 Buys and 2 Holds for a Moderate Buy consensus rating. The shares are priced at $22.49 and the $31.93 average target suggests a gain potential of ~42% in the next year. (See FNKO stock forecast on TipRanks)