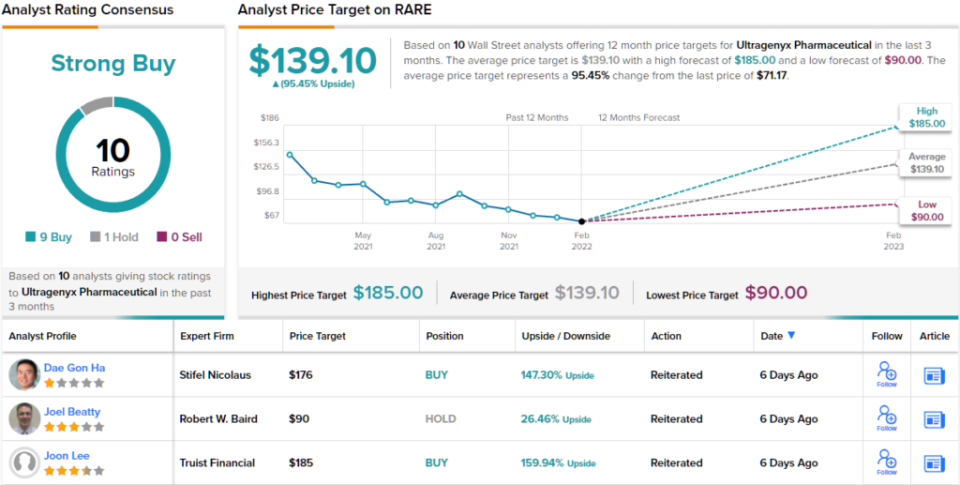 J.P. Morgan Says Buy These 2 Stocks as They Are Oversold

2022 has started out with a marked increase in market volatility, accompanied by a sharp reversal of last year’s bullish trend. The sudden correction, and the shift to a more downbeat investor sentiment, are generally attributed to a series of increased risk factors. On the international front, these tensions include geopolitical tensions on the Russia-Ukraine border and around China’s belligerence. Domestically, factors impacting the markets include the inflation that is both high and rising; and the prospect of higher interest rates from the Federal Reserve.

That last factor has been getting a lot of airtime recently. The Fed is widely expected to enact a half-percent rate increase next month, and at least two more such hikes by the end of the year. However, according to JPMorgan’s Chief Global Markets Strategist Marko Kolanovic, these potential rate hikes are no reason for investors to worry.

“We believe risky asset markets have mostly adjusted to monetary policy shifts by now,” Kolanovic writes, and goes on to add, “We expect risky asset markets to rebound as they digest these risks and sentiment improves, aided by inflows from systematic investors and corporate buybacks. We thus retain a pro-risk view with a strong cyclical tilt in our model portfolio…”

So just what stocks are getting the thumbs up from JPMorgan? The firm’s analysts have picked out two stocks whose price has fallen low – but in these cases, the analysts see the low price as a gateway. We ran both names through TipRanks’ database to see what other Wall Street’s analysts have to say about them. Let’s take a closer look.

First up is Ultragenyx, a commercial- and clinical-stage biopharma company with a focus on rare diseases. These diseases are defined by the FDA as affecting fewer than 1 in 50,000 people; as such, they have a small patient base and limited prospects for drug sales to reimburse the high costs of development. Ultragenyx spreads out those costs by operating several of its development lines in partnerships with other pharmaceutical researchers, and works assiduously at commercialization of its approved products.

On that front, the company has had a measure of success. In 4Q21, Ultragenyx showed $83.4 million in total revenue, which was in-line with consensus expectations. The total included $55.5 million in revenue from burosumab (branded as Crysvita), as well as smaller sums from two other commercial-stage products. Triheptanoin (Dojovi) saw product sales of $11.8 million, while vestronidase alfa (trade name Mepsevii) brought in $3.1 million.

Dojovi is still in the launching phases of its commercialization, and so its revenue number is considered encouraging. The drug had 270 US patients on reimbursed commercial therapy at the end of 2021.

For the full year, Ultragenyx reported $351.4 million in total revenues. This was up 29% from the $271 million reported for 2020. The full-year gain reflects increased sales of Crysvita as well as the launch of additional drugs. The company finished the year with $1 billion in liquid assets, available for funding the development pipeline.

Ultragenyx has several advanced programs in that pipeline. Notable among this is GTX-102, being researched in collaboration with GeneTx. This drug is a potential treatment for Angelman Syndrome, and is currently in Phase 1/2 clinical trials. The first four patients, in Canada and the UK, have received multiple doses without adverse effects. Patient dosing as begun in the US. As the next main catalyst on the calendar, the company expects to release safety and efficacy data in the middle of this year.

The company’s most advanced research tracks involve two gene therapies; DTX401, for the treatment of glycogen storage disease type Ia (GSDIa), and DTX301, for the treatment of ornithine transcarbamylase (OTC) deficiency. Both of these have completed early-stage clinical trials and are progressing to Phase 3 studies. The first patients in the Phase 3 GlucoGene study of DTX401 have already been dosed, while the Phase 3 eNH3ance study of DTX301 is expected to begin later in 1H22. The two studies will last 48 and 64 weeks, respectively.

Despite the positive progress on the pipeline, Ultragenyx shares are down 50% in the last 12 months. According to JPMorgan 5-star analyst Cory Kasimov, this represents a buying opportunity.

“As a diversified orphan disease company with tangible assets, 2022 catalysts, and a strong management team, we can no longer ignore this opportunity. The mid-year GTX-102 Angelman update is clearly the key event, and mgmt continues to sound a very optimistic tone. We acknowledge there’s a lot riding on this update…. we’re not trying to call a bottom on the market, but we are increasingly constructive on stories with real assets, pipeline optionality, and upcoming levers that offer favorable risk/reward… and we believe RARE meets that bar,” Kasimov opined.

Based on the above, Kasimov sets an Overweight (i.e. Buy) rating on Ultragenyx shares, and his $132 price target implies an upside potential of 85% for the year ahead. (To watch Kasimov’s track record, click here)

Wall Street shares the bullish sentiment here, as indicated by the Strong Buy consensus view. This stance is backed by 10 recent reviews, which include 9 Buys against 1 Hold. Shares are selling for $71.17 and have an average price target of $139.10, for a one-year upside of ~95%. (See Ultragenyx stock forecast on TipRanks)

Now let’s shift gears, and look at one of the US markets’ more recognizable names. In fact, you may be using some of their products right now. Goodyear is one of the world’s top four automotive tire manufacturers, and the largest in the US. The company’s most recent expansionary move was its acquisition, completed last year, of the Cooper Tire & Rubber Company. The buyout cost Goodyear $2.5 billion.

The acquisition was worth it for Goodyear, however, as the tire giant reported solid numbers in its 4Q21 and full year results. Q4 revenue came in at $5.05 billion, the highest in more than two years and up 38% year-over-year, while EPS, at 57 cents per share, handily beat the 33-cent forecast. For the full year, total revenues were $17.5 billion, a sum that just edged over the expected $17.3 billion. Annual EPS was reported at $2.09, beating the $1.82 forecast.

Despite these solid results, Goodyear shares fell sharply after the report, and the stock is down 33% from the peak in reached in January of this year. The fall in stock price has been attributed to management’s concession that inflationary and economic pressures are rising against the company, and will likely worsen in the course of 2022. Goodyear faces rising costs across its supply, manufacturing, and distribution chains, on everything from labor to raw materials to shipping. The company estimates that raw materials alone will increase in cost by $700 million to $800 million in the first half of 2022 compared to 1H21.

JPMorgan analyst Ryan Brinkman believes that investors have no need to panic here, nor should they avoid this stock.

“The sell-off strikes us as an overreaction given what foresee as much more modest needed reductions to consensus SOI and FCF, and because pricing has been quite strong so far this cycle, with Goodyear posting its 6th consecutive positive quarterly Price/Mix-to-Raw Materials spread in 4Q, suggesting the possibility of better than currently envisaged ability to price for non-commodity costs, although these costs are likely recoverable via pricing over time, suggesting little impact to normalized SOI and FCF and with the company continuing to make progress along other more controllable fronts, such as merger-related synergies,” Brinkman stated.

In line with these comments, Brinkman rates GT an Overweight (i.e. Buy), and sets a $23 price target to suggest an upside of ~40% through the end of 2022. (To watch Brinkman’s track record, click here)

All in all, the Street’s analysts are split down the middle on this one, although the bulls have the edge; based on 3 Buys and Holds, each, the stock qualifies with a Moderate Buy consensus rating. On where the share price is heading, the outlook is more conclusive; the forecast calls for 12-month gains of 36%, given the average target clocks in at $22.40. (See Goodyear stock analysis on TipRanks) 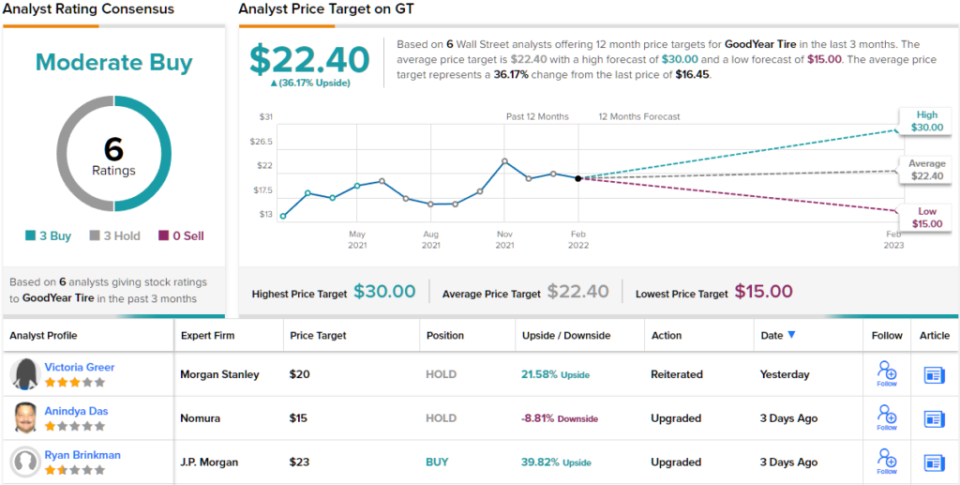