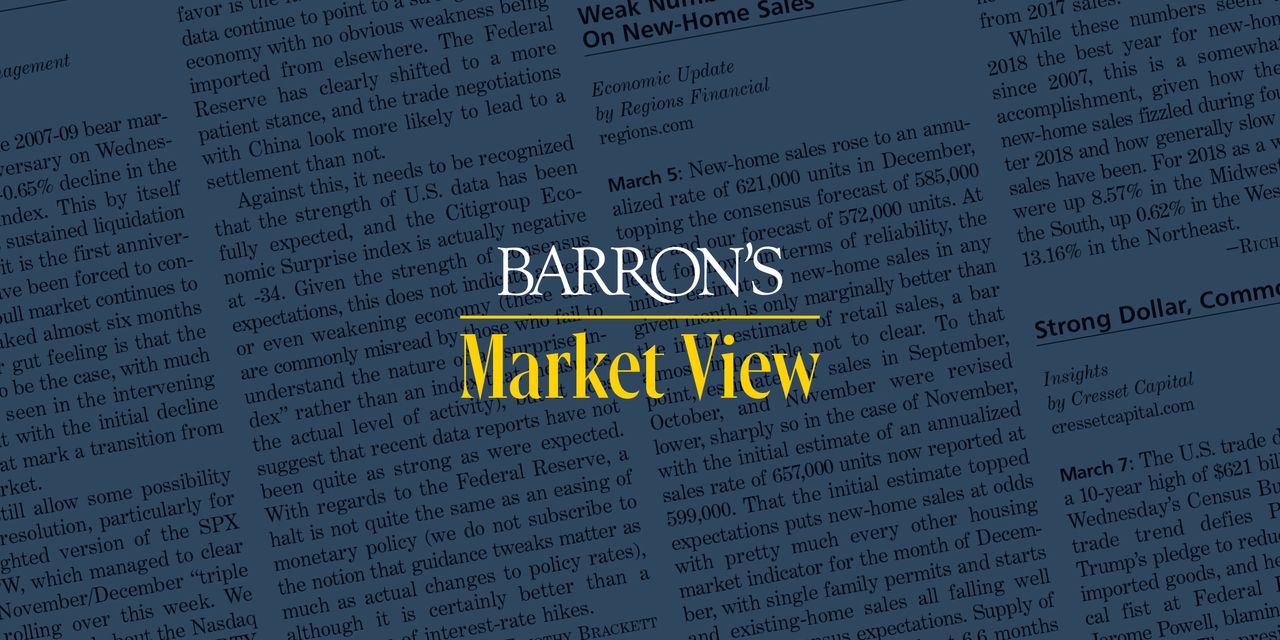 It’s a Bear-Market Rally. Whether it Lasts Depends on the Fed.

This commentary was issued recently by money managers, research firms, and market newsletter writers and has been edited by Barron’s.

July 22: In a recent note, we pointed out that bear-market rallies end suddenly and without catalyst. And the higher stocks move, the less favorable risk/reward becomes. However, given the depth of the peak-to-trough selloff year to date, -24.5%, we see further upside to this rally consistent with past historical “reflex moves”, particularly in growth stocks.

But key to the durability of the advance will be how asset prices react to the FOMC next Wednesday. And only [Federal Reserve Chair] Jay Powell knows (and we suspect that even he doesn’t yet know) which Fed Chair will dominate the mic—a Volckerizer, a Previously Pivoted Powell, or, unlikely, but given the shadow of the global slowdown that has echoes of 1974, it can’t be ruled out, a Blundering Burns.

Investor Advisory Service
July 22: With the stock market’s decline, the forward P/E ratio of the


S&P 500
is 16.3, below the five-year average of 18.6 and 10-year average of 17.0. As noted, consensus earnings growth estimates look optimistic, but several high-quality growth stocks, particularly in the technology and consumer discretionary sectors, have fallen by 40% or more.

Cove Street Capital
July 21: Roughly 15% of the U.S. economy is in some way tied to residential housing. Interest rates are up and housing affordability has taken another whack. That just won’t be good for GDP. The top 25 banks have roughly a 70% of shareholders’ equity exposed to commercial real estate. They have diversified business models, fee income, and on net benefit from reasonable interest-rate increases.

The next 500 banks by size have roughly 245% of their shareholders’ equity in commercial real estate. Walk into an office building near you and tell me what you see. Now tell me what a commercial real-estate loan up 300 basis points looks like on that math on a refinancing. That is the answer to why we don’t think smaller banks are buyable here en-masse at 1.5 times book value.

Sizing Up the CHIPS Act

UBS
July 21: The U.S. Senate voted 64-34 in favor of advancing the CHIPS Act. This modified bill is aimed at increasing U.S. domestic semiconductor production. This key step will open up a vote for the Senate to pass the CHIPS Act early next week. If passed, it will go to the House of Representatives and then the President for approval. The bill would provide about $52 billion in subsidies and tax credits to bolster U.S. production.

has lobbied heavily for the passage of the bill following plans for a new $20 billion factory in Ohio.

Samsung
,
both of which are building new plants, also have been lobbying Congress to pass the CHIPS Act.

have announced plans to build a plant in France and Intel has plans for an $88 billion investment across Europe. Increased chip foundry investment is part of the broader trend toward greater focus on national security, supply-chain resilience, and economic independence. We advise investors to position their portfolios for the era of security, including cybersecurity and energy security.

Northern Trust
July 19: In the depths of the Covid downturn and recovery, we made an effort to stop using the word “unprecedented.” While it was true that the economy had never seen such a tremendous contraction and bounce back, the word didn’t aid anyone’s understanding of how to deal with the crisis. Two years later, as we contemplate the growth outlook, we again are in unexplored territory: Recession fear continues to rise, but the markers of a classical recession aren’t yet evident.

Our primary source of confidence in growth is the strong state of the labor market. As long as people are working, economic activity will carry on and recession risk is mitigated. Inflation is a growing constraint, placing the expansion at risk. Our base case remains a growth slowdown, but not an outright recession.

EM Will Shine if Dollar Dives

The Leuthold Group
July 19: After a promising start this year, international stocks are now trailing the S&P 500. At mid-year, despite a strong U.S. dollar, the MSCI ACWI ex-USA and MSCI EM ex-China indexes essentially matched the S&P 500. Indeed, through June, the developed-markets index was ahead of the S&P 500 nearly two-thirds of the time, while EM ex-China surpassed the S&P 500 more than 90% of the time. Recently global recession fears have intensified and the U.S. dollar has soared, and both international indexes now slightly trail domestic stocks. Nonetheless, we are sticking with a tilt toward global stocks—particularly EM ex-China—primarily because we expect the U.S. dollar to soon dive!

To be considered for this section, material, with the author’s name and address, should be sent to MarketWatch@barrons.com.