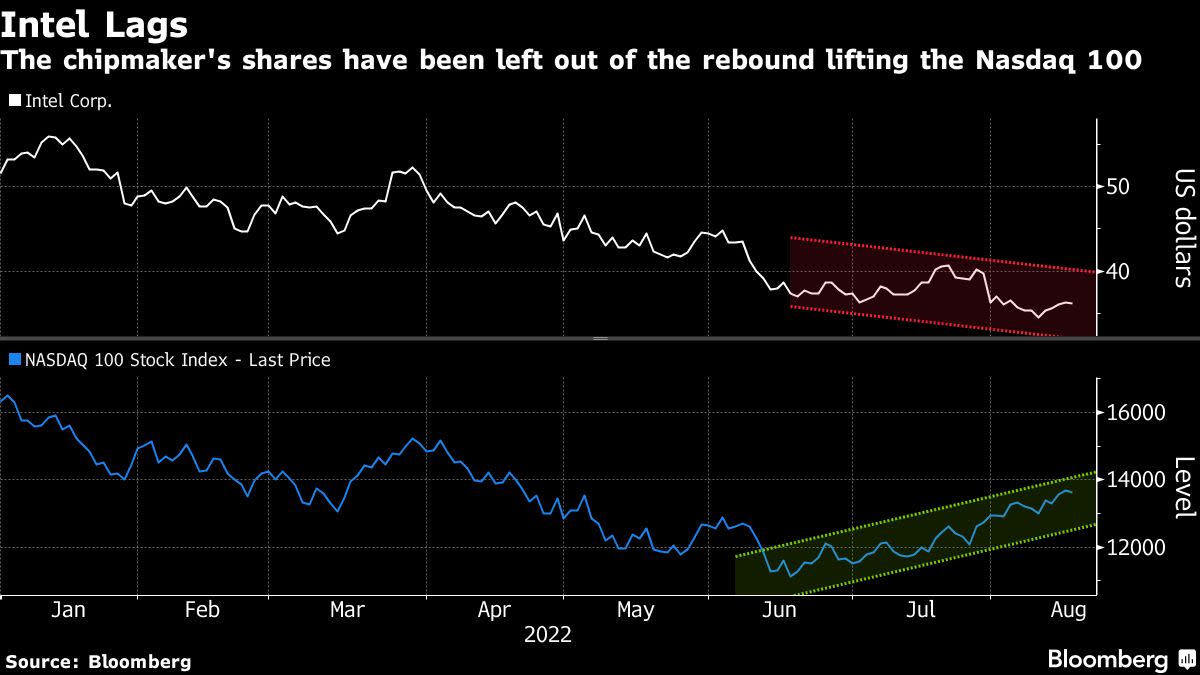 Intel Is Left Behind as Chip Stocks Roar Back

(Bloomberg) — Intel Corp. has been conspicuously missing from a rebound in technology stocks that’s lifted almost every other member of the Nasdaq 100 since the index bottomed in June.

The world’s biggest maker of computer processors is one of just six companies in the tech-heavy benchmark whose shares have lost ground since June 16. Meanwhile, the index has jumped 21% as cheaper valuations and optimism that inflation is cooling have enticed traders to snap up beaten-down tech stocks.

The lagging performance is the latest sign that investors are still hesitant to buy into Chief Executive Officer Pat Gelsinger’s effort, which is stretching into its 18th month, to restore Intel’s chip manufacturing prowess. While a reduced profit and revenue forecast in late July didn’t help, similar weak forecasts from peers like Nvidia Corp. and Qualcomm Inc. haven’t stopped those stocks from rallying. Shares of both companies have gained more than 17% since mid-June.

“Investors have put Intel in the too-hard-to-turn-around bin,” said Kim Forrest, founder and chief investment officer at Bokeh Capital Partners. “People have a shorter-term view than the stock can promise.”

After dominating the semiconductor industry for decades, Intel lost its lead in semiconductor process technology, allowing companies like Taiwan Semiconductor Manufacturing Co. to overtake it. Gelsinger has pledged to restore the company’s leadership in advanced production by spending tens of billions of dollars to build new factories in the U.S. and Europe and retool existing ones.

The company’s weak stock performance, however, shows investors are realizing that even if Gelsinger is successful, the turnaround will take a long time. With Intel bleeding market share with products built on old manufacturing technology, there may be more disappointing earnings reports in the interim. Until it can sort out those issues, growth will be hard to come by.

Wall Street analysts have taken an ax to Intel’s profit estimates after the disappointing second-quarter earnings report. Projections for 2023 earnings per share have fallen by 28% over the past month, according to data compiled by Bloomberg. That compares with a drop of about 13% for semiconductor-related companies in the S&P 500, reflecting deteriorating demand for many types of chips amid rising inventories and slowing economic growth.

The lower profit outlook has made Intel more expensive relative to anticipated earnings. At almost 15 times profits over the next 12 months, Intel is priced near the highest in the past decade.

Intel’s combination of elevated valuation and uncertain timing on the duration of the turnaround is keeping Siddharth Singhai, founder and chief investment officer at Ironhold Capital Management, on the sidelines for now.

“They have such an incredible position if they can just pick up on that technological slack,” he said.

Tech Chart of the Day

The Nasdaq 100 index dropped about 1% on Wednesday, putting the index on course to snap its weekly winning streak if losses hold. It had risen for four consecutive weeks and the rebound from its mid-June low brought the tech-heavy index closer to the average analyst price target.

(Updates share prices throughout. An earlier version corrected the spelling of Singhai’s name in penultimate paragraph.)