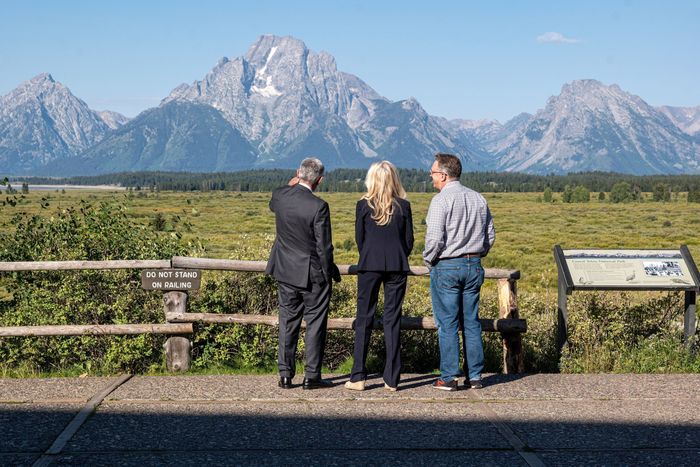 From left: Fed officials Jerome Powell, Lael Brainard, and John Williams ponder the great outdoors during a break at the economic symposium at Jackson Hole.

Grand Teton National Park has a stark warning for visitors to the Wyoming mountain oasis. “Bears are active,” it says on its website. “Travel in groups of three or more, make noise, and carry bear spray,” is the official advice.

You have to wonder if Federal Reserve Chairman Jerome Powell was hit with bear spray when he arrived at the park for his Friday morning talk at the annual Jackson Hole economic symposium, hosted by the Federal Reserve Bank of Kansas City.

Wall Street spent all of this past week fretting over what Powell would say Friday morning. Worries that he’d take a hawkish tone dampened the rip-roaring summer rally that drove a 20% bull-market rise in the Nasdaq Composite from mid-June to mid-August. June-quarter earnings turned out to be just meh, rather than flat-out terrible, and there was fleeting optimism the Fed might wrap up its tightening cycle sooner than previously expected. But headed into Friday’s talk, two worrisome trends developed. First, interest rates stopped falling, with the 10-year Treasury’s yield climbing back above the 3% level, a sign that investors see further substantial hikes ahead. Second, we got not-so-great earnings from companies with quarters ending in July.

That was particularly true in the tech sector.

(ticker: DELL) late Thursday slashed its outlook for the full year, citing slowing spending on both personal computers and enterprise hardware. That came one day after software giant Salesforce.com (CRM) likewise cut its 2022 view, reporting that customers are slow-walking approval of new projects.

Dell Chief Financial Officer Tom Sweet tells Barron’s that, late in the quarter, demand for commercial PCs fell, while hesitation on infrastructure projects—particularly those involving servers—rose. Cloud-computing providers were among the procrastinators. “They are not immune to economic cycles,” Sweet says. “We’re seeing sentiment get more cautious across our customer base.”

In the end, Powell’s short speech—just 10 minutes—underlined the Fed’s focus on bringing inflation down to 2%, noting that “without price stability, the economy does not work for anyone,” adding that “the burdens of high inflation fall heaviest on those who are least able to bear them.” (For more on the talk, see this week’s The Economy column.)

Get a sneak preview of the top stories from the weekend’s Barron’s magazine. Friday evenings ET.

Powell said that addressing inflation will require a “sustained period of below-trend growth,” that one month of slightly lower inflation data in July is well short of what the Fed must see to change direction, and that the central bank “must keep at it until the job is done.” Powell made it clear that further rate hikes are coming.

“While higher interest rates, slower growth, and softer labor market conditions will bring down inflation, they will also bring some pain to households and businesses,” he said. “These are the unfortunate costs of reducing inflation. But a failure to restore price stability would mean far greater pain.” So, the Fed will stay hawkish, hardly good news for stocks. They sold off on Friday, with the


Nasdaq
tumbling 3.9%. There could be further unpleasantness ahead.

I had my first byline in Barron’s almost 36 years ago, but I’ve never had my name atop Up & Down Wall Street before, and that gives me a special thrill. In my early years here, I spent half my time doing research for the late Alan Abelson, who created this column, hired me, and always graciously cited my name when he’d use my work in this space.

Alan at that point was our editor, chief columnist, guiding spirit, and benevolent dictator. In Up & Down, he doled out a weekly dose of commonsense investment advice and muckraking journalism, always wrapped in wry, devilish wit. Alan was my mentor, and he remains my role model and hero. I often think about what he’d make of NFTs, cryptocurrency, SPACs, the metaverse, Web3, and meme stocks, and I know the answer. He’d make mincemeat out of it all.