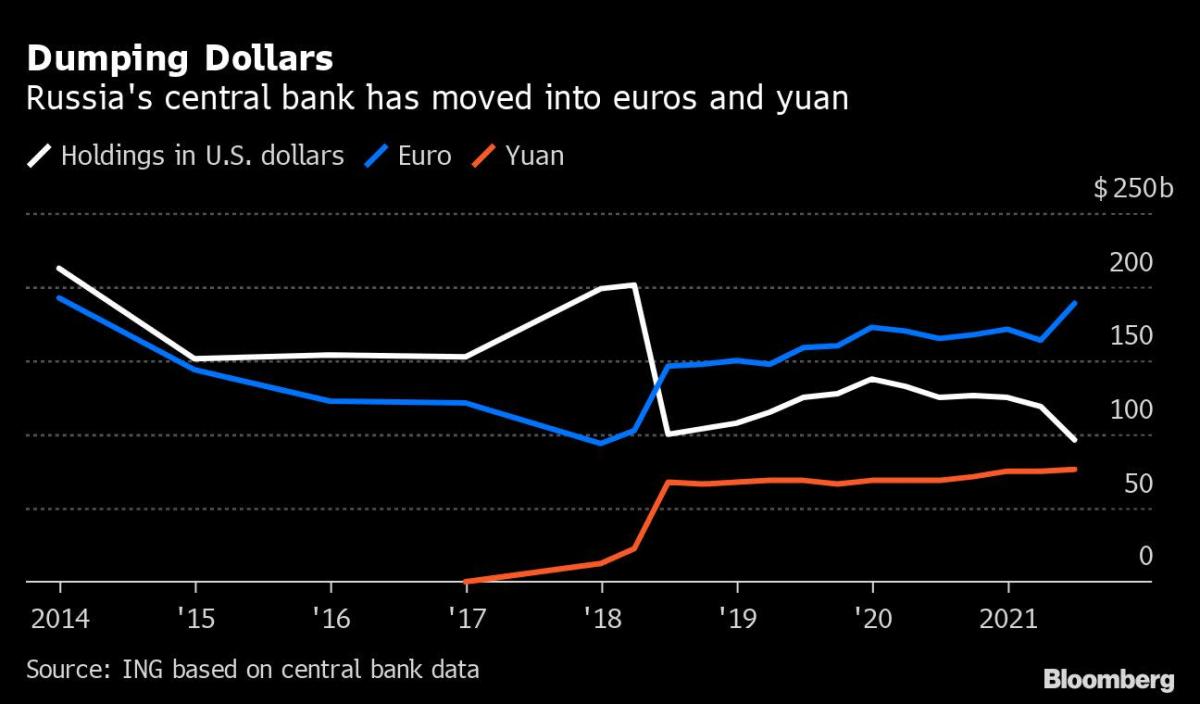 EU, U.S. Agree to Disconnect Some Russian Banks From SWIFT

A joint decision to cut some Russian banks off from the SWIFT messaging system, used for trillions of dollars worth of transactions between thousands of banks around the world, was announced in a joint statement Saturday. The move is aimed at Russian banks that have already been sanctioned by the international community, but can be expanded to other Russian banks, if necessary, according to a spokesman for the German government.

In addition, the nations said they would act together to impose “restrictive measures that will prevent the Russian Central Bank from deploying its international reserves in ways that undermine the impact of our sanctions.”

As the conflict in Ukraine grinds on, a consensus has emerged to prevent Russia from using the plumbing of modern money and isolate it as a pariah similar to Iran, Venezuela and North Korea. The U.S. and its European partners zeroed in on a potential source of cash for the government in the $643 billion of central bank reserves that Putin had amassed ahead of his attack.

“Sanctioning Russia’s central bank is likely to have a dramatic effect on the Russian economy and its banking system, similar to what we saw in 1991,” said Elina Ribakova, deputy chief economist for the Institute of International Finance. “This would likely lead to massive bank runs and dollarization, with a sharp sell-off, drain on reserves — and, possibly, a full-on collapse of Russia’s financial system.”

The West is putting a financial stranglehold on Russia as Putin snuffs out any hope of diplomacy to end the fighting in Ukraine by ordering his military to press ahead on Saturday.

“Sanctioning the central bank of Russia is the kind of draconian sanctions we’ve employed on Iran,” Representative French Hill, an Arkansas Republican, said on Twitter. “I don’t see why waiting bears any strategy. Putin’s taken this catastrophic action. He needs to pay the maximum price now.”

The Biden administration has already sanctioned five Russian banks, including Sberbank and VTB Group, which collectively account for about half of the country’s banking assets. Russia had over 360 licensed banks at the start of the year.

While Russia has been steadily reducing its reliance on foreign currency, the central bank still had 16.4% of its holdings in dollars at the end of June 2021, according to the latest official data, down from 22.2% a year earlier. The euro’s share was up at 32.2%.

By targeting the central bank, the U.S. could complicate the enactment of monetary policy while removing a potential source of cash for the government.

Losing access to funds abroad would handcuff Russia’s central bank as it tries to shore up the ruble in the foreign-exchange market by selling hard currency. The direct interventions, announced this week after Putin ordered his military to attack Ukraine, mark the first time the Bank of Russia waded into the market since 2014.

The move would be “devastating” for Russia, according to Tim Ash, a strategist at Bluebay Asset Management in London. “We would see the ruble crash.”

Although the decision would be without precedent for an economy the size of Russia’s, the U.S. has previously sanctioned the central banks of adversaries. In 2019, the Treasury Department blacklisted the monetary authorities of Iran and Venezuela for funneling money that supported destabilizing activities in the respective regions. North Korea’s central bank is also blacklisted.

The Bank of Russia kept 22% of its hoard in gold, most of which is held domestically and would be out of reach of Western sanctions, while about 13% of the central bank’s holdings were in yuan.

Russia still has about $300 billion of foreign currency held offshore — enough to disrupt money markets if it’s frozen by sanctions or moved suddenly to avoid them, according to Credit Suisse Group AG strategist Zoltan Pozsar.

In a report this week that parsed data from the central bank and financial markets, Pozsar calculated that a much larger share is held in dollars than official numbers suggest. The Bank of Russia’s dollar exposure is about 50%, Credit Suisse estimates.

Any unreported reserves would be far harder to track and target with sanctions, though it does raise the potential for the U.S. and others to target more accounts — if they can identify where that money is. Pozsar said in his note that the offshore currency holdings he outlined could be vulnerable to sanctions, or to being moved out of their potential reach, potentially fueling further de-dollarization.

Sanctioning the central bank could also affect the country’s ability to facilitate trade and hinder its ability to promote international investments.

In the case of Iran, by the time the Trump administration targeted the country’s central bank in 2019, there was little left of the Islamic Republic’s economy that hadn’t been penalized, with the U.S. already enacting substantial sanctions on its banking industry.

It increased the chilling affect of sanctions on doing business with Iran even further, prevented the the central bank from accessing its special drawing rights under the International Monetary Fund, and also harmed its ability to carry out humanitarian trade including foods and medicines.

Should sanctions against the Bank of Russia be modeled after those imposed on Iran, they’ll likely result in a freeze of assets in dollars and euros and may extend to yen and other currencies except for yuan, according to Oleg Vyugin, a veteran Russian banker and formerly a first deputy chairman at the central bank.

“Sanctions against the central bank are the last step,” he said. “It’s a formula tried in Iran, which initially results in the deepest decline in the economy, production, household incomes. And then a country begins to adapt, create its own settlements with those that agree to cooperate.”

Russia may also not necessarily be able to count on all Chinese financial institutions. At least two of China’s largest state-owned banks are restricting financing for purchases of Russian commodities, Bloomberg reported on Friday.

Other financial sanctions that could still be on the table include a ban for western public pension funds to invest in Russian assets and excluding the country from JPMorgan Chase & Co.’s Emerging Market Bond Index or the equivalent MSCI Inc. benchmarks, according to Bluebay’s Ash.

Full blocking sanctions against some Russian banks should already choke off their ability to conduct dollar payments with U.S. counterparts even if they retain access to the global messaging service.

Banks can also resort to alternative systems and even communicate via email to send payment instructions, said Julia Friedlander, senior fellow at the Atlantic Council.

Still, “it’s like a kick in the shins,” she said. “Transactions with Russia would be slower and more expensive. A sudden cut-off will also hold a lot of current assets in limbo, for corporations and banks.”