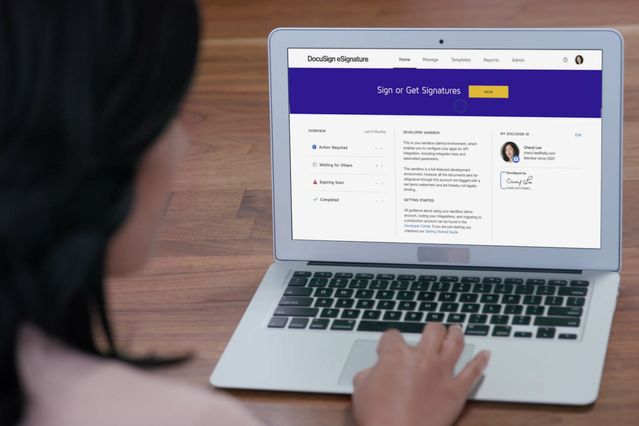 were rising Friday after the e-signature company posted quarterly earnings and revenue that topped analysts’ estimates and raised its forecast for fiscal-year billings.

(ticker: DOCU) earned an adjusted 44 cents a share in its fiscal second quarter, beating Wall Street estimates of 42 cents. Sales rose 22% to $622.2 million and topped estimates of $602 million. Billings in the second quarter were $647.7 million, up 9% from the year-earlier period.

“After a tough F1Q, DocuSign delivered solid F2Q results and a guide that looks fairly conservative, but importantly, does not indicate another material step down in growth over the remainder of the year,” wrote Evercore ISI analyst Kirk Materne in a research note.

“While we believe the results and guidance provide a bit of a backstop for the shares, we believe it is going to take some time to build back confidence in DOCU’s ‘normalized’ growth rate,” he added. Materne maintained an In Line rating on DocuSign shares with a target price of $75.

Rishi Jaluria at RBC Capital Markets said he was maintaining his Sector Perform rating on the stock and price target of $65.

“Stepping back, we thought the quarter/guide were better-than-feared but we came away less confident in a timely turnaround to healthy growth and remain in wait-and-see mode until a new CEO” is named, Jaluria said in a note. Chief Executive Officer Dan Springer left the company in June.

Write to Joe Woelfel at joseph.woelfel@barrons.com

2022-09-09
Previous Post: Are These Green Energy Companies Right For Your Portfolio?
Next Post: Google’s ‘Quiet Hiring’ Method Is Bad News for ‘Quiet Quitters’