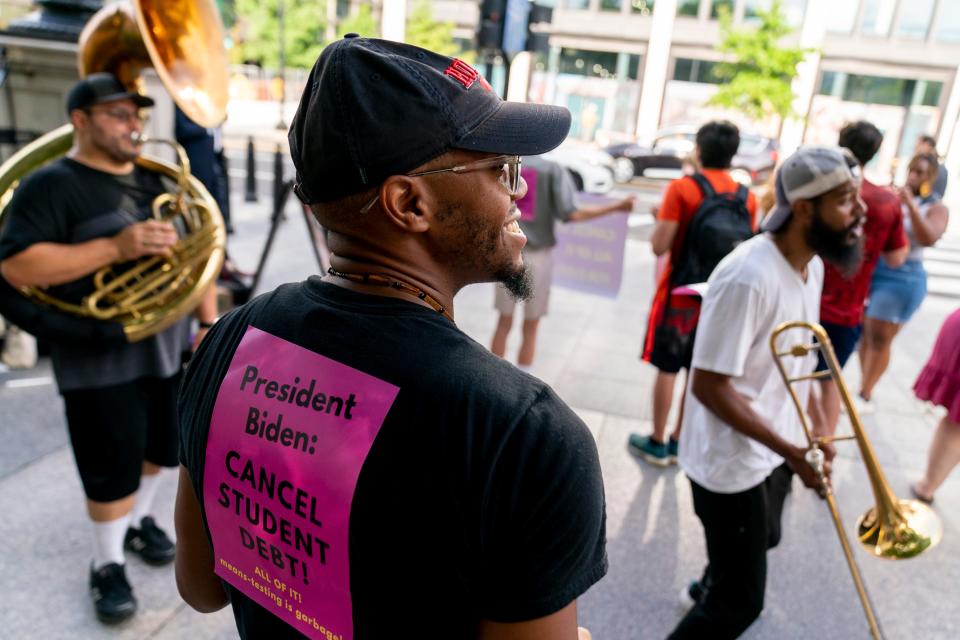 Do I qualify for student loan forgiveness? What to know about Biden’s debt plan.

President Joe Biden tweeted Wednesday what many have anticipated for months – a plan to forgive or reduce student loan debt for millions of debt-saddled borrowers.

If you earn less than $125,000 annually, he said you’re eligible to receive cancellation of up to $10,000 in student loans. If you received a Pell Grant, you can get up to $20,000 forgiven. If you’re not eligible for any student debt forgiveness, your pause on repayments continues to be paused until year end. The Department of Education is also working on a proposal introducing a new repayment plan to ease the burden on borrowers.

Since the start of the pandemic in 2020, borrowers haven’t had to pay a cent on their student loans. During this time, the pressure has grown for the president to just cancel the debt. It was one of the platforms Biden ran on for president in 2020.

Though the plan will be welcomed by many, it will still likely garner criticism. Many had sought for higher forgiveness amounts – $50,000 or even all amounts, no matter how large. The total outstanding balance for federally-owned (including defaulted) student loans in December 2021 was $1.38 trillion, the New York Federal Reserve said in April.

Individuals with an annual income of less than $125,000 (or under $250,000 for married couples or heads of households) are entitled to have up to $10,000 in federal student loans canceled. No private loans will be forgiven.

Those who received a Pell Grant in college also will be eligible for up to $20,000 in debt cancellation.

For those who still have student debt, the repayment pause since March 2020 will be extended to the end of the year. Borrowers will resume payments in January 2023.

What is a Pell Grant?

Federal funding that’s usually awarded only to undergraduate students who display exceptional financial need and have not earned a bachelor’s, graduate, or professional degree. Sometimes, a student enrolled in a post-baccalaureate teacher certification program might receive a Pell Grant.

The Department of Education will announce details at 2:15 p.m. EDT.  and in the weeks ahead. The application will be available no later than Dec. 31, when the pause on federal student loan repayments terminates.

Nearly 8 million borrowers may be automatically eligible to receive relief because relevant income data is already available to the Department of Education.

A one-time maximum debt forgiveness of $10,000 per borrower will cost around $300 billion for borrowers with incomes less than $125,000, according to analysis published on Tuesday by Junlei Chen and Kent Smetters at the Penn Wharton Budget Model, based at the University of Pennsylvania. This cost increases to $330 billion if the program continues over the standard 10-year budget window.

Before the announcement, the Government Accountability Office estimated just the payment pause since the start of the COVID-19 pandemic cost the government $102 billion. That amount included suspending all payments due, interest accrual, and involuntary collections for loans in default from March 13, 2020, to Aug. 31.

Too Much Talent Band performs during a rally to urge President Joe Biden to cancel student debt near the White House in Washington, D.C., Wednesday, July 27, 2022.

Who benefits most from the student debt forgiveness plan?

Mostly higher-income households. Between 69% and 73% of the debt forgiven accrues to households in the top 60% of the income distribution, Chen and Smetters said.

A New York Federal Reserve study in April, though, said that the income cap to the forgiveness “substantially reduces the cost of student loan forgiveness and increases the share of benefit going to borrowers who are more likely to struggle repaying their debts.”

For example, an income cap of $75,000 for a $10,000 cancellation raises the share of forgiven loan dollars going to borrowers in low-income neighborhoods to 35% from 25% and the share going to lower credit score borrowers to 42% from 37%, it said. Income caps also increase the share of loans forgiven that were delinquent before the pandemic to 60% from 34%.

LIFE’S NOT FAIR: Is student loan forgiveness fair to those without college degrees? Americans remain divided over costs

How many Americans have student loans outstanding?

More than 43 million people have federal student loans outstanding, according to the Education Data Initiative, which collects data and statistics about the U.S. education system.

The total outstanding balance for federally owned (including defaulted) student loans in December 2021 was $1.38 trillion, the New York Federal Reserve said in April. Most (67%) of student loan borrowers are under 40 years old, however only 57% of balances are owed by those under 40. That means those with larger balances are more likely to be older, likely due to borrowing for graduate school, it said.

The White House estimates that its initiative will cancel the full remaining balance for roughly 20 million borrowers.

CAN’T AFFORD IT: Is college worth it? Americans say they value higher education, but it’s too expensive for many

The average federal student loan debt balance is $37,667 while the total average balance (including private loan debt) may be as high as $40,274, Education Data Initiative estimates.

Are there tax consequences for taking the forgiveness?

The Committee for a Responsible Federal Budget estimates Biden’s plan “would more than undo the deflationary pressures from the Inflation Reduction Act and add 0.15 percentage points of additional inflation in the near-term,” noted Sarah Foster, Bankrate analyst.

JOB WORRIES: With 80% of workers afraid of losing jobs during a recession, business owners trim costs

If you qualify for student debt forgiveness, what should you do with that money?

“Student loan forgiveness will likely decrease your monthly payment or get rid of it entirely,” said Dan Casey of Bridgeriver Advisors in Bloomfield Hills, Mich. Take that freed up money to pay off high interest debt like credit cards, build up your emergency fund, or invest it in your retirement. Even though today looks brighter, the economy is still on shaky footing.

SHAKY GROUND: Are we in a recession? America’s economy stinks no matter what you call it.

If you don’t qualify for student loan cancellation, what should you do to prepare to start repaying in January?

“If you haven’t made a student loan payment since the pause began, it’s important to understand how much you’ll owe each month,” Daniel Milan, advisor at Cornerstone Financial Services, said.

Then, review the interest rates on your loans and start paying off the highest interest ones first, enrolling in autopay so you don’t miss any payments while you get back into the habit of paying regularly and consider refinancing if it lowers your payments.

“Moving multiple loans into one loan can also help you keep better track of how much you actually owe,” he said.

Medora Lee is a money, markets and personal finance reporter at USA TODAY. You can reach her at mjlee@usatoday.com and subscribe to our free Daily Money newsletter for personal finance tips and business news every Monday through Friday morning.

This article originally appeared on USA TODAY: What is a pell grant? What to know about Biden student loan debt plan.