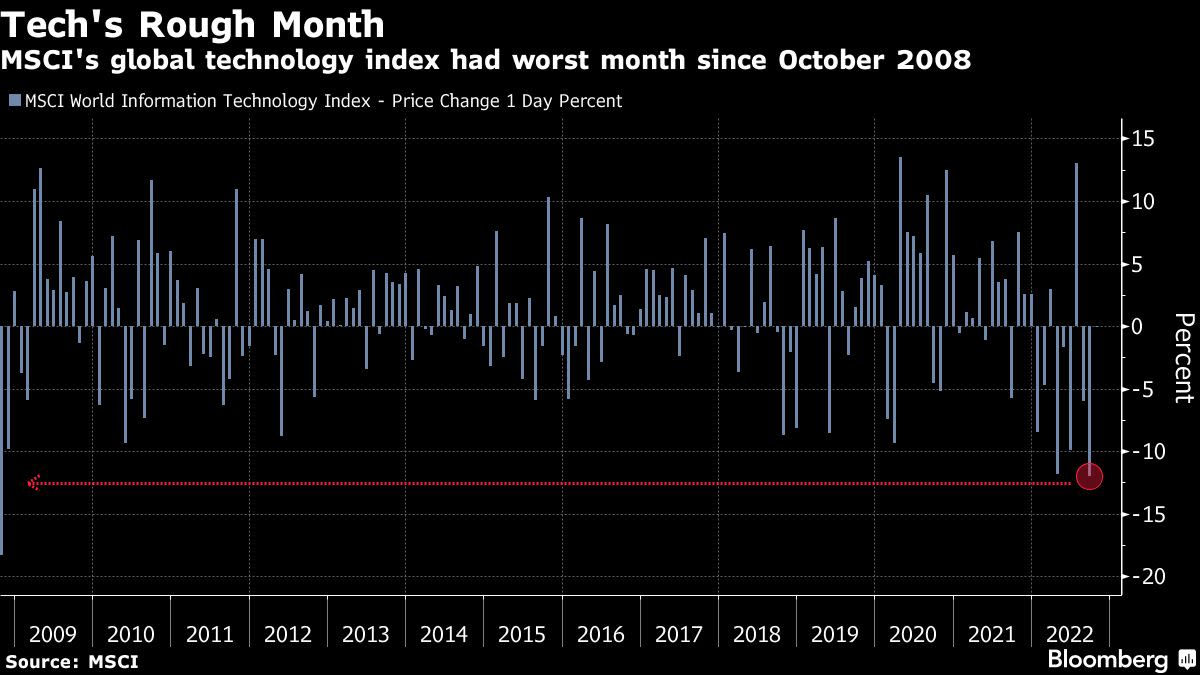 (Bloomberg) — Chip-related stocks in Japan, South Korea and Taiwan slumped, contributing to a wipeout of more than $240 billion from the sector’s global market value after the Biden administration imposed curbs on China’s access to semiconductor technology.

The selloff spread to currency markets. South Korea’s won slumped more than 1.6% versus the greenback while the Taiwan dollar dropped 0.7% amid losses in their stock markets.

“We believe short-term uncertainties over foundry demand will increase, as China is the world’s second-largest cloud computing market,” Phelix Lee, an equity analyst at Morningstar Inc., wrote in a note. “The new shock may further dampen sentiment in a sector that is already ravaged by weak consumer electronics demand.”

The curbs are expected to have far-reaching implications. For companies with plants in China — including non-US ones — the rules will create additional hurdles and require government signoff. The move is also set to fuel a knock-on impact across the sector’s supply chain and add to a growing list of challenges for technology shares including a hawkish Federal Reserve and tensions across the Taiwan Strait.

The US announced the export curbs Friday, and there have been suggestions that similar actions may be deployed in other countries to ensure international cooperation. The announcement spurred a two-day rout of over 9% in the Philadelphia Stock Exchange Semiconductor Index that saw it close Monday at its lowest level since November 2020. Markets in Korea, Japan and Taiwan were shut that day for holidays.

Samsung lost as much as 3.9%, the most in a year. South Korea’s SK Hynix Inc., one of the world’s largest makers of memory chips that has facilities in China — is part of a supply network that sends components around the world. Its shares slid 3.5% before paring losses.

The current rout has already wiped out more than $240 billion from chip stocks worldwide since Thursday’s close, according to data compiled by Bloomberg.

The curbs are a “big setback to China” and “bad news” for global semiconductors, Nomura Holdings Inc. analyst David Wong wrote in a note Monday. China’s localization efforts may also be “at risk as it may not be able to use advanced foundries in Taiwan and Korea,” he wrote.

Shares of Chinese chipmakers extended their recent losses on Tuesday, with Morgan Stanley saying that the broader restrictions around supercomputers and multinational capital investment in China could be “disruptive.”

Chinese state media and officials have responded to Biden’s move in recent days, warning of economic consequences and stirring speculation about potential retaliation.

“The latest US move would prompt China to move faster in fostering the domestic chip industry,” said Omdia analyst Akira Minamikawa. “Japanese firms should be ready for a future — maybe in a decade or two — when they lose all the Chinese customers as a result of the current tension dialing up speed of the Chinese efforts.”

The measures seek to stop China’s drive to develop its own chip industry and advance its military capabilities. They include restrictions on the export of some types of chips used in artificial intelligence and supercomputing and tighten rules on the sale of semiconductor manufacturing equipment to any Chinese company.

The US is seeking to ensure that Chinese companies don’t transfer technology to the country’s military and that chipmakers in China don’t develop the capability to make advanced semiconductors themselves.

“With the latest measure, it would become difficult for China to manufacture and develop semiconductors because most semiconductor equipment are dominated by US and its allies,” such as Japan and Netherlands,” Chae Minsook, an analyst at Korea Investment & Securities, wrote in a report. “It is impossible to maintain the chip industry without adopting advanced equipments.”