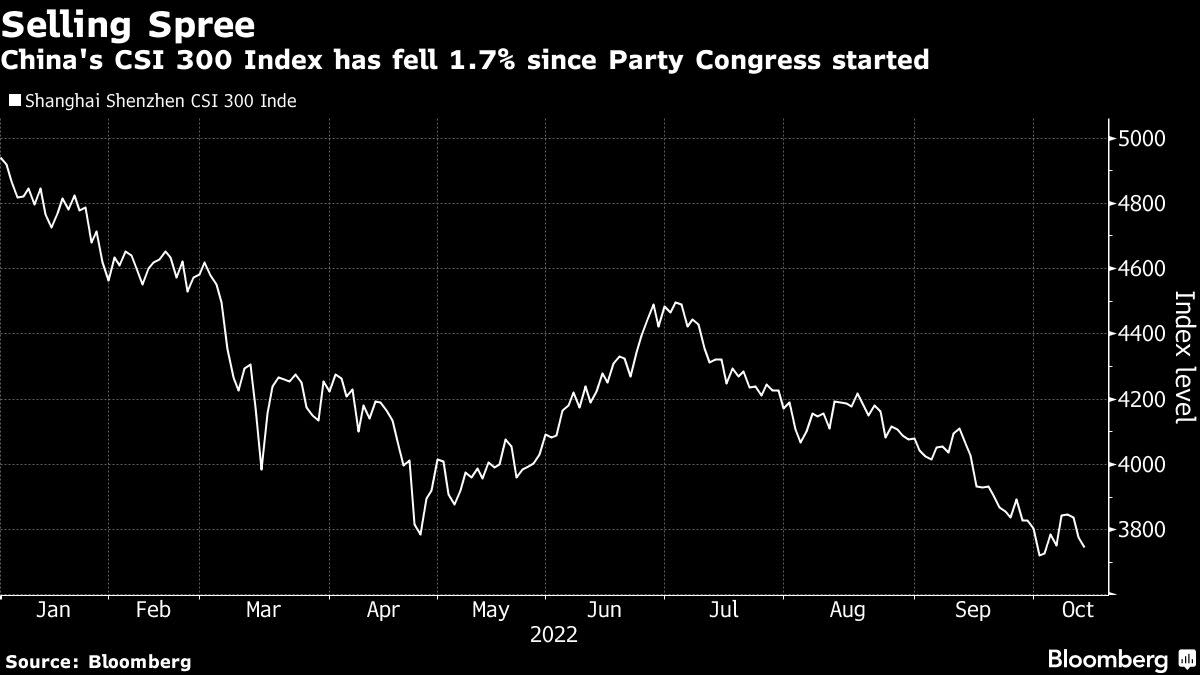 (Bloomberg) — The selloff in Chinese assets is intensifying as this week’s Communist Party Congress disappoints traders wanting relief from a strict Covid-Zero policy and help for an economy mired in a property crisis.

The benchmark CSI 300 Index has fallen more than 2% this week, after posting the worst three trading days since the start of a Congress from the gauge’s inception in 2005. High-yield dollar bonds have declined for seven straight days to a record low, while the offshore yuan slumped to its weakest since it started trading.

The extended weakness in China markets is due to “slower economic growth, both cyclically and structurally,” said Redmond Wong, market strategist at Saxo Capital Markets. While the credit impulse is bottoming, the nation’s transition to a new development model and “growth is going to be slower than previous decades,” he added.

The nation’s markets have been among the worst performers globally this year, leaving investors looking to the leadership gathering for policy signs to drive a recovery. While President Xi Jinping’s renewed pledge for technology self-reliance offered some reprieve, his defense of Covid Zero and the lack of measures for a crisis-hit property sector were seen as a disappointment.

An increase in Covid cases in Beijing to the highest in four months and the government’s decision to delay the release of key economic indicators have added to market jitters. The soft outlook projections from Chinese consumer companies also led to a selloff in the stocks Wednesday.

“Something other than technicals is driving the market down,” said Hao Hong, partner and chief economist at Grow Investment Group in Hong Kong. “The congress outcome may be different from what the market was expecting, in terms of Covid-Zero, property and senior leadership.”

An index of mainland Chinese companies listed in Hong Kong is heading for its lowest close in 14 years, while the benchmark Hang Seng Index slide by as much as 3%, with tech stocks leading a decline.

The stock and yuan weaknesses are a cumulation of concerns that China will fail to revive growth, with analysts pointing to its debt issues, slowing population growth and Xi’s continued drive for a “common prosperity goal.” There’s growing speculation that Beijing will impose property and inheritance taxes on the wealthy, driving outflows and draining talent at a time when a strategic tech race with the US worsens.

The offshore yuan fell 0.7% on Wednesday to 7.2747 against the dollar, the weakest since it started trading in August 2010. The currency has declined more than 12% in both onshore and offshore markets, even as the central bank uses a variety of tools to battle a surging dollar.

With the People’s Bank of China easing to help the economy, while the Federal Reserve embarks on aggressive rate hikes to battle inflation, analysts see no letup in yuan weakness.

“So long as you continue to expect the dollar to not let up, USD/CNY has room to push higher,” said Galvin Chia, emerging markets strategist at NatWest Markets in a Bloomberg Television interview. “Every time we come out with a new forecast they keep getting broken; initially we were thinking 7.25 but that probably needs to be revised higher given the price action.”

–With assistance from John Cheng.