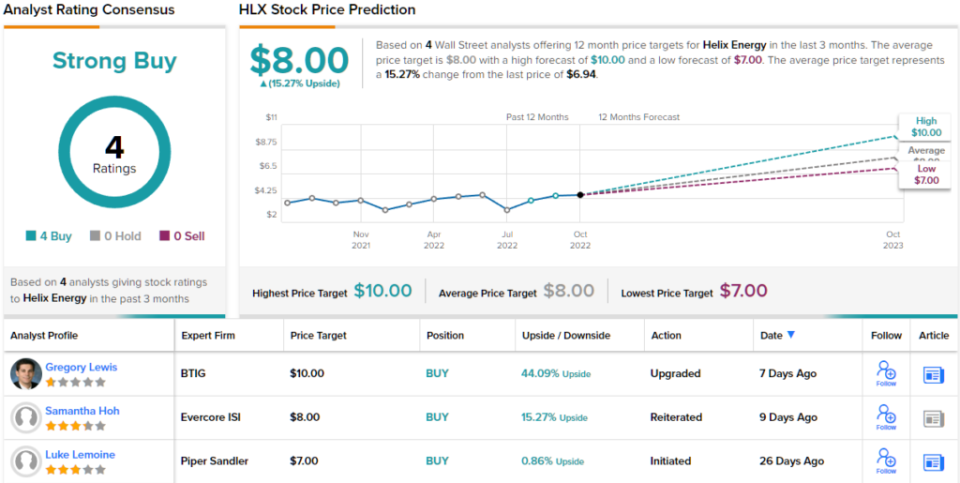 Yogi Bera would remind us that predictions are difficult, especially about the future – and that pearl of wisdom is more relevant than ever in today’s oil markets. As a rough proxy for the price of crude, gasoline prices at the pump pulled back this summer, and are starting to head back up now. The latest upward pressure on oil came from Saudi Arabia, which announced a 2 million barrel per day cut in OPEC’s production.

But that was only one factor. Most of the oil market is getting pushed around by unpredictable forces, and OPEC’s role is hardly the largest. The Middle East is chronically unstable, with unrest in Iran and ongoing conflicts in Iraq and Syria; Western nations are sanctioning Russia in response to the invasion of Ukraine; supply chain issues, including availability of tankers, continue to disrupt trading patterns; and the global economy, facing recessionary pressures, is increasingly vulnerable to high inflation, which in turn is driven in large part by energy prices.

It’s enough to make your head spin. But if you try to predict where prices will go, it’s better to bet up than down right now. Global demand for fossil fuels, especially oil and gas, continues to be robust – and as long that holds, there will continue to be some upward pressure on oil prices.

For investors, a sector with increased product price potential presents an opportunity – to find the companies that stand to gain as prices go up. And right now, looking at the oil industry for investment firm BTIG, analyst Gregory Lewis sees just such an opening in the oilfield services (OFS) companies. These are firms that offer support to the exploration & production companies and the drilling companies – everything from drilling technology to wastewater removal to specialized engineering expertise on pumps and piping.

In Lewis’ view, the oilfield service firms can offer investors over 40% upside for the year ahead. We’ve pulled up the latest data from TipRanks on two of his picks; combined with Lewis’ comments, that data may clarify just where these companies are headed.

The first oilfield services company in our sights occupies a specialist niche in a specialist sector – Helix focuses on offshore activities, offering support through the full lifecycle of offshore oil and gas fields. Helix’s services include undersea robotics, well intervention, subsea trenching and cable burial, and seabed clearing activities. While Helix has historically worked with the hydrocarbon industry, in recent years the company has expanded its services to reach the offshore renewable energy segment.

Helix organizes its operations by both business segment and geography. The company’s segments include well intervention, robotics, and production facilities; geographically, the company operates in deep water in the Gulf of Mexico and the North Sea, as well as Brazil, West Africa, and in the Asia-Pacific region.

The company earlier this week reported its 3Q22 financial results, and showed a sharp increase in top line revenues. For the quarter ending September 30, Helix had revenues of $272.55 million, up 50% year-over-year and an impressive 67% sequentially. For the first three quarters of the year, Helix reported more than $585 million in total revenues, for a y/y gain of 15%. Helix reported a diluted EPS loss of 12 cents per share in Q3, a result that was relatively flat from the 13-cent loss reported in the year-ago quarter, and much better than the 20-cent EPS loss reported in Q2.

In his coverage of this stock, analyst Lewis notes the strength of the industry behind Helix, writing: “We are in the early innings of the current up-cycle for offshore O&G services which looks to be tightening faster than usual because of demand overlap from offshore wind.”

“Our base case assumption is that HLX is able to take advantage of a cyclical recovery in OFS over the next few years with additional tailwinds coming from the global buildout of offshore wind,” Lewis added.

With this bullish stance in mind, Lewis upgrades HLX from Neutral to Buy, and sets a $10 price target that suggests a 44% upside on the one-year time frame. (To watch Lewis’ track record, click here)

Lewis is hardly the only bull when it comes to Helix; this stock has 4 recent analyst reviews on file, and they are all positive – for a unanimous Strong Buy consensus rating. Shares in Helix are priced at $6.94 and their average price target, of $8, suggests a 15% upside for the next year. (See HLX stock analysis on TipRanks)

We’ll continue our look at oilfield services with Transocean, the world’s leading contractor for offshore drilling services on oil and gas wells. Transocean’s particular specialty is drilling services in ultra-deepwater and harsh environments; the company has operations off the continental shelf in the Gulf of Mexico, for example. Transocean’s fleet of drilling rigs – all of which it owns or has partial ownership interests in – consists of 37 mobile offshore units. These include 27 ultra-deepwater floaters and 10 harsh environment floaters. The company is working to expand its fleet through the construction of two ultra-deepwater drillships.

In the four quarters from 2Q21 through 1Q22, Transocean saw its top line revenues slide while earnings losses grew deeper – but that trend appears to be ending, and 2Q22 saw better news for the company. At the top line, the second quarter brought revenues of $692 million, up 18% from 1Q22. Year-over-year, the Q2 revenues were up a more modest 5.5%. On the bottom line, the company’s net loss for 2Q22 was 10 cents per diluted share. This compares favorably to the 26-cent diluted EPS loss of 1Q22, and to the 18-cent per share net loss of 2Q21.

Transocean finished Q2 this year with $2.28 billion in total assets, including $729 million in cash. The company’s net cash from operations came in at $40 million. While this is down sharply from the $249 million of the year-ago quarter, it is a strong turnaround from the $1 million cash loss reported in the previous quarter. Transocean’s total unrestricted cash and cash equivalents was reported at $1.16 billion as of June 30.

In an important metric that bodes well for Transocean’s future, the company has a contract backlog – that is, work that is contracted for but not yet begun – of $6.2 billion.

Checking in again with BTIG’s Gregory Lewis, we find that he sees Transocean in a good place to start improving its financial results. Noting “improving dayrates in the floater market,” Lewis goes on to explain that it “will allow the company to recharter its rigs at higher levels.” The analyst continued, “We note Norwegian semi rates are also starting to tick up (a core part of RIG’s fleet). Bottom line: we believe we are in the early innings of the ongoing offshore rig upcycle, which should provide strong cash flows and refinancing opportunities for RIG to improve its balance sheet.”

To this end, Lewis rates RIG shares a Buy along with an $8 price target, indicating potential for a robust 118% upside in the next 12 months.

Overall, this deepwater oil field services firm has picked up 7 reviews from the Street’s analysts, and these include 4 Buys, 2 Holds, and single Sell, giving the stock its Moderate Buy consensus rating. The shares have an average target of $5.22, implying an upside of ~43% from the trading price of $3.66. (See RIG stock analysis on TipRanks) 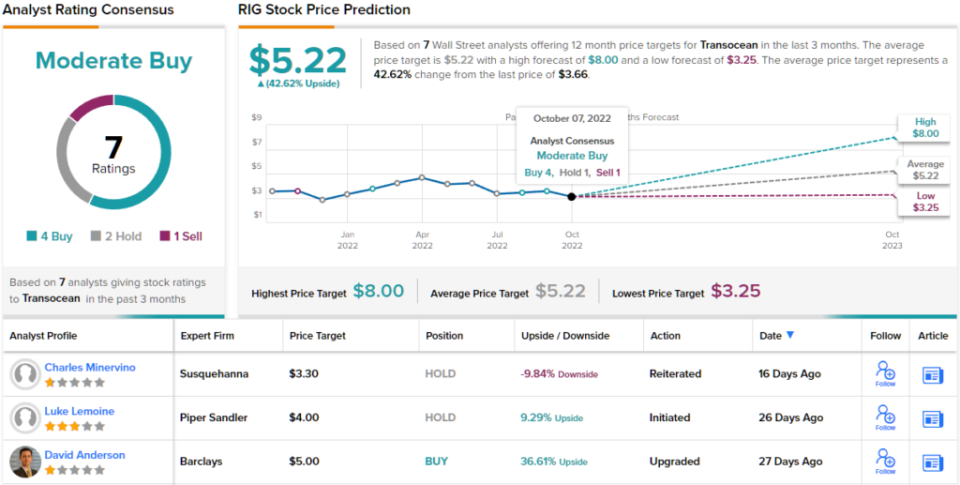