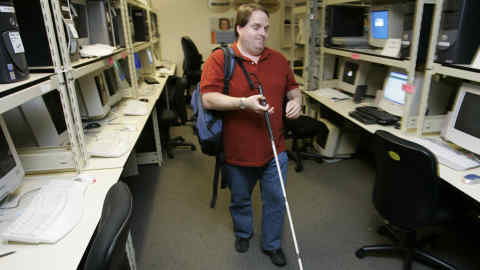 Businesses must focus on ability, not disability

People with disabilities are the world’s biggest minority, numbering more than 1bn globally. But four decades after the UN General Assembly adopted the World Program of Action Concerning Disabled Persons, they are still being excluded from large parts of the economy. That is bad for economic prosperity as well social justice.

Even in developed western economies, organisations are often hesitant to employ people with disabilities, so even those with appropriate qualifications are significantly under-represented in the workforce. There are 14.6mn people with a disability in the UK, with an employment rate of 53 per cent for those of working age, compared with 82 per cent for the wider population. Of 31mn people aged 16 and over with disabilities in the US, 19.1 per cent are employed, compared with 63.7 per cent for those without a disability, and they are much more likely to live in poverty. Many of those with jobs cannot escape precarious, low-paying, entry-level positions.

As a result, we are failing to unlock the economic potential of millions of people at a time when labour market shortages and poverty in many countries mean societies desperately need greater participation. We simply cannot afford to have people sit idly on the sidelines. Three actions are required to tackle this lost opportunity.

First, we need to eliminate social as well as physical barriers to work. Disability policies have removed many physical constraints, such as efforts to provide improved access to buildings and information. Yet the barriers we cannot see can be the most insidious, such as stigma, stereotyping and discrimination.

The 2021 UK Family Resources Survey found that one in three people with a disability experienced significant prejudice. Recent research published in the journal Frontiers in Psychology suggests positive role models can reduce stigma, yet those with a disability are still largely invisible to the general public. We need to understand why this happens and what we can do about it.

Second, we need to start thinking in terms of ability rather than disability. Many employers are apprehensive because they lack the knowledge, skills or resources to provide appropriate accommodation and social inclusion.

Some organisations have already recognised that having an atypical body or mind may come with specific and extraordinary talents. For example, the organisation Discovering Hands trains people with severe vision impairment as clinical breast examiners because of their heightened sense of touch. They can detect tumours as small as 6-8mm, compared with the norm of 10-20mm, thereby aiding early diagnosis.

Accenture, Deloitte, EY, Microsoft, 3M and Google have long known that people with neurological conditions such as autism spectrum disorder and dyslexia can have extraordinary skills in pattern recognition, general cognitive ability and memory. The researchers Robert Austin and Gary Pisano have argued that neurodiversity can bring a competitive advantage to organisations that embrace it.

Microsoft’s integrated “accessibility journey”, overseen by a chief accessibility officer, specifically seeks to hire those with autism. The approach uses “accessibility by design” with, for example, a dedicated research team to produce Eye Control in Windows 10 for people with ALS, a disease of the nervous system causing loss of muscle control.

People with certain conditions may also be skilled entrepreneurs. My colleague Ingrid Verheul has shown how impulsiveness and hyperactivity in people with attention deficit hyperactivity disorder (ADHD) can make them effective in grasping emerging opportunities — something JetBlue founder David Neeleman and Paul Orfalea of Kinko’s (now FedEx Office) have demonstrated. The resilience shown in overcoming a disabling illness or impairment may benefit an aspiring entrepreneur in dealing with setbacks and failure.

Third, we need to stop treating those with a disability as a discrete category of human beings. Any one of us could join this minority at any time. As George Will, the political commentator, put it: “I will never be black, and I will never be a woman, but I could become disabled on the drive home tonight.”

René Bakker is associate professor of strategy and entrepreneurship at Rotterdam School of Management, Erasmus University. He was born with a visible physical impairment

The degree to which an impairment of the mind or body is perceived to be a handicap is subjective and dependent on context, not a law of nature. Someone who is red-green colour blind may have an impairment but only feel disabled in specific roles, such as aspiring to be a train conductor.

People with disabilities seem largely invisible to large organisations, recruiters and investors, which are missing out on a huge untapped resource. A 2018 study by Accenture found companies that excel in disability employment and inclusion financially outperform their peers. One Canadian study suggested that the value of benefits that could be realised by an inclusive society would amount to more than 17 per cent of GDP.

The economic case for inclusion is clear-cut. A diverse workforce is more innovative, adaptive and resilient. Unlocking the potential of people with a disability does not just benefit them. It benefits us all.

2022-09-09
Previous Post: Charles Schwab Says High-Yield Dividend Stocks Are the Best Play Right Now; Here Are 2 Names That Analysts Like
Next Post: Are These Green Energy Companies Right For Your Portfolio?