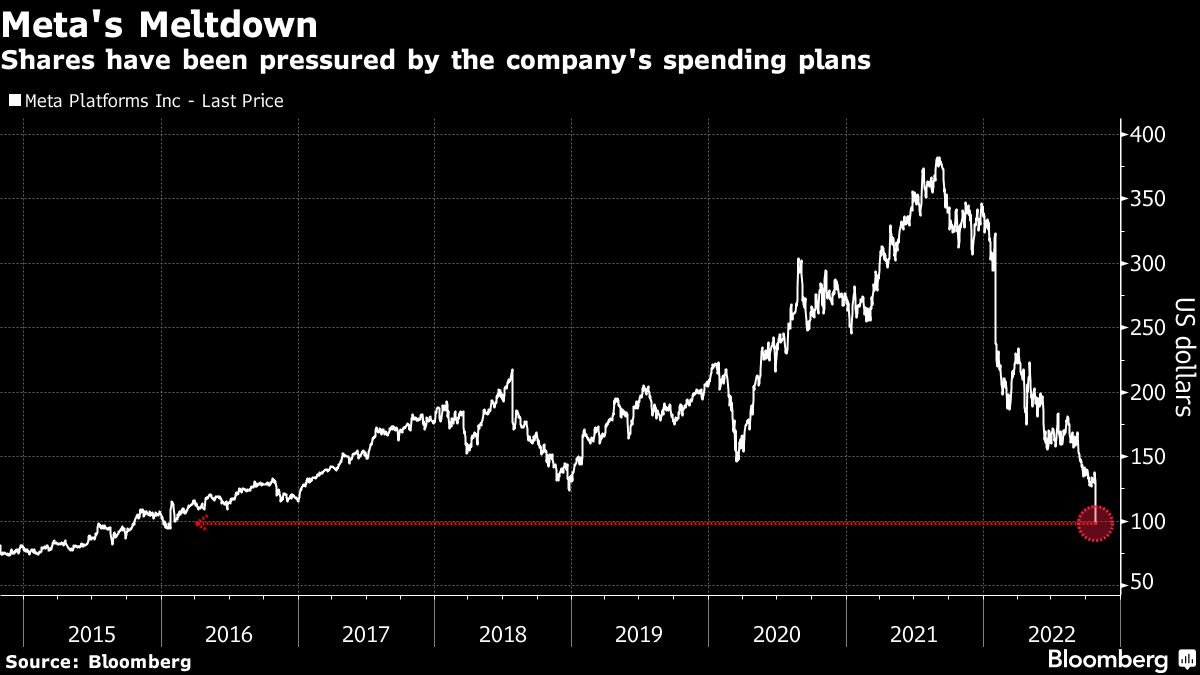 Bulls on Meta Stock Have One Big Problem: Mark Zuckerberg

(Bloomberg) — Mark Zuckerberg built Meta Platforms Inc. into one of the biggest companies in the world, but some investors now see him as an obstacle to the stock recovering from a historic selloff.

The Facebook parent has tumbled 71% this year, with last week’s earnings pushing the shares to their lowest since 2016. The biggest weight on the stock: Meta is spending billions of dollars to develop the metaverse, an immersive virtual world that the chief executive officer has long believed represents the future of computing.

The strategy is curbing earnings even as the company acknowledges it’s unlikely to deliver significant revenue for years. While investors may long for Meta to renew its focus on selling ads to its billions of social-media users, the company’s structure gives Zuckerberg total control, so there’s little they can do but what they’ve already been doing: sell.

“He’s tone deaf to what the owners of the company want, outside of himself,” said David Katz, chief investment officer at Matrix Asset Advisors. “The stock could double in a year with better management, with management that is more focused on shareholders.”

Despite these issues, Katz views the stock as “dirt cheap,” and said that “on a longer time horizon, if you’re willing to hold your nose, I think there’s a great likelihood that Meta will be significantly higher than it is today.”

Zuckerberg owns or controls about 90% of the company’s unlisted Class B shares, which have 10 votes each versus one vote each for the Class A shares that are publicly traded.

The structure prevents activists from influencing the board and management, something that has happened with big tech in the past. In 2014, Carl Icahn pushed for Apple Inc. to accelerate its buyback program as a way of pushing up the stock price.

Asked about Zuckerberg’s control, a Meta spokesman referred to the company’s proxy statement, which reads, “We believe that our capital structure is in the best interests of our shareholders and that our current corporate governance structure is sound and effective.”

Under Zuckerberg, the statement adds, “we have established a track record of creating value for our shareholders and navigating important opportunities and challenges.” The company’s investments to improve privacy and safety “may not have been possible if our board of directors and CEO were focused on short-term success over the long-term interests of our community and our company.”

In the S&P 500, 33 companies have unequal voting rights similar to those at Meta, according to ISS Corporate Solutions, including Google parent Alphabet Inc., Paramount Global, and Comcast Corp.

Zuckerberg’s stake means he has been hit especially hard by the stock’s collapse. Over the past 13 months, his total wealth loss has exceeded $100 billion. His apparent willingness to stomach such losses is a sign of his faith in the metaverse, and if the bet does play out, investors may one day look back with relief that Zuckerberg wasn’t forced to change course.

Zuckerberg deserves the benefit of the doubt, said Mark Long, a fund manager at Homestead Advisers.

“He took Facebook public when it had huge margins, so he clearly cares about making money. He waited years to monetize WhatsApp, so he’s clearly patient. And he bought Instagram early, so he’s clearly smart,” he said. “I think he’s earned the right to pursue this long-term strategy.”

Tech Chart of the Day

Meta shares sank 24% last week, the biggest one-week drop on record for the company, which went public a decade ago. The collapse even exceeded a 21% crash in the first week of February, when another disastrous earnings report vaporized $251.3 billion in market value in a single session. Due to how much the stock has already declined this year, last week’s drop translated to $86.4 billion in lost market value.

–With assistance from Subrat Patnaik.

2022-10-31
Previous Post: Three digital payment methods to adopt today
Next Post: Here’s how it could impact you