The U.S. The Bureau of Labor Statistics released the consumer price index (CPI), the “inflation number,” for June this week. So macro trends are this week’s featured flavor since CPI wasn’t exactly pretty. From the press release:

“Over the last 12 months, the all items index increased 9.1 percent before seasonal adjustment.”

So if you’re an American who didn’t get a 9.1% pay raise last year (which most didn’t), then everything is more expensive. If you dig into what made up that 9.1%, the really important stuff (read: food, energy) outpaced it. Food prices rose 10.4%, Energy prices were up 41.6%.

Of course, that means gold, the classic inflation hedge asset, should be going up. Except it didn’t? And bitcoin … did. Also the euro is a dollar stablecoin now. What gives?

That (and maybe more …) below.

You’re reading Crypto Long & Short, our weekly newsletter featuring insights, news and analysis for the professional investor. Sign up here to get it in your inbox every Sunday.

I’ll spend a lot of this newsletter on a soapbox because inflation really annoys me. But also because as a son of a Greek immigrant, I find the euro really annoying. And gold as a monetary asset never really made sense to me. Plus, I really like Bitcoin.

Since a lot of things have been said about all of these things recently, there’s a lot for me to latch onto and get worked up about.

“Inflation is good for you.” Google it. Real-life articles have been published that claim this.

“We need inflation.” Google that too. Plenty of articles.

The basic gist of the argument for needing inflation is that a deflationary currency – one that increases in value over time rather than decreases – will lead to excess saving (or “hoarding”) and lack of spending in the economy given the time value of money (TVM). TVM is the core tenet of finance. A “dollar today is worth more than a dollar tomorrow” given the earning potential of that dollar.

That’s a whiteboard world. In the real world, there’s nothing wrong with saving. Also, and this should be shocking to absolutely nobody, people buy things because they either a) need them or b) want them. While they may be doing a TVM calculation implicitly, no one is pulling out a HP-12C to decide if they do want guac on their burrito.

Is anything an inflation hedge?

There’s a really good theoretical argument for the fixed-rate 30-year mortgage mentioned in the previous section as an effective inflation hedge (but don’t give Wall Street any ideas … again). But normally gold is touted as the ultimate inflation hedge. Gold has been money for millennia and it’s relatively rare. And it’s difficult to produce more gold. So in times of high inflation, we expect gold to increase commensurately.

Except now we have gold 2.0 in bitcoin. Here’s how both have fared since the June CPI was announced.

Bitcoin told gold: “Look at me, I am the captain now.”

I know this is a very short, cherry-picked time period, but it’s pretty profound. Bitcoin is finally doing that thing you’d expect it to do as gold 2.0. Maybe bitcoin can be an inflation hedge after all.

Last week, for the first time in 20 years, the euro hit parity with the U.S. dollar. CoinDesk’s Omkar Godbole wrote a great article about what that might mean for crypto markets. In that article, Genesis Global Trading’s Noelle Acheson (my former boss) was quoted saying that bitcoin has been “negatively correlated with the dollar index the past couple of years.”

So far this year, this trend has held up. The dollar index has performed extraordinarily well (up 12.3%), the euro compared with the dollar hasn’t (-10.8%) and not-to-be-upstaged bitcoin has done even worse (-56.1%). 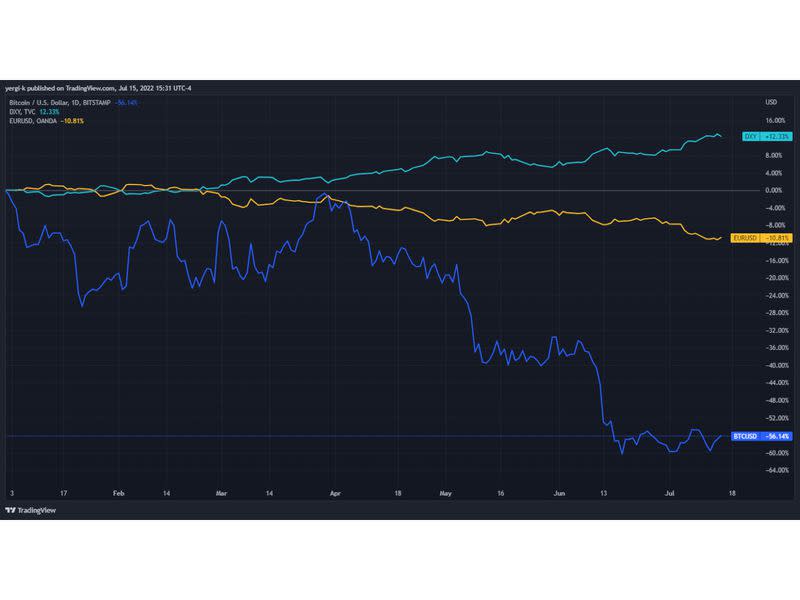 Setting aside both crypto and my negative bias against the euro and its troika (who so graciously bailed out Cyprus, Ireland, Portugal and Greece) for a moment, it’ll be interesting to see what the European Central Bank (ECB) will do in the face of a weakening euro, looming gas shortages, increasing energy prices and a impending recession. Hard times in the eurozone might beget hard times elsewhere.

For all of Fed Chairman Jerome Powell’s woes, at least he isn’t ECB President Christine Lagarde.

What does this have to do with bitcoin and crypto?

Thankfully (unthankfully?) it’s 2022. And in 2022 bitcoin is a real macro asset. So all of the things that happen in the broader economy affect bitcoin. The Hard Times in crypto that I wrote about the last few weeks may become Harder Times if things in the economy get worse.

Sure, bitcoin could be a way to opt out of the current financial system and get away from inflation and poorly run monetary unions. But for now, they’re tied together.

How can I generate some steady income in this volatile market? Here are 3 top-rated stocks yielding up to 7.5% (with fat upside to boot)

6 Software Stocks to Buy and 4 to Sell, According to an Analyst