Say whatever you will about Mark Zuckerberg’s decision to change his company’s name to ‘Meta,’ but the truth is, the metaverse is coming and we can’t stop it. The expansion of the internet, and its increasing integration with virtual reality (VR), augmented reality (AR), and interactive social media and gaming, is gaining momentum. The question is not if it will be fully realized, but when.

But before we get there, we need the inevitable build-out, the physical infrastructure to support the online network. And that will open up scores of opportunities for investors.

Against this backdrop, we’ve used the TipRanks database to call up the latest info on three stocks that are likely to tie-in closely with the metaverse’s early growth. These names have received enough support from the analyst community to earn Strong Buy consensus ratings. Let’s take a closer look.

One certainty of the metaverse is that it will depend on cameras – high-end digital video will be necessary to convert real-world views into online spaces. Matterport specializes in just that – the company offers a spatial computing platform for high-quality 3D space capture. The company’s software can worth a wide range of cameras, to build a digital side to any space. The connection with the metaverse, a proposed ‘virtual world’ is clear.

Translating the real world to the digital realm is big business, and Matterport has benefitted greatly from it. The company has over 6.2 million digital spaces under its management, based in some 170 countries. Per year, the company brings in approximately $111 million in top-line revenue.

Matterport took advantage of its own success and 2021’s generally rising stock environment to go public in the summer via a SPAC transaction. The combination, with Gores Holdings VI, was completed in July, and the MTTR ticker started trading on the NASDAQ on July 23. The transaction brought Matterport $640 million in gross proceeds, and since then the shares have gained 28%. The company has a current market cap of $4.42 billion.

5-star analyst Daniel Ives, covering the tech sector for Wedbush, is bullish on Matterport – especially given that he sees a total addressable market exceeding $240 billion.

“We continue to believe Matterport is in the early innings of a massive growth story playing out over the coming years. Based on our conversations with investors over the past few months we believe this tech story remains ‘under the radar’ among growth investors and we highlight MTTR as one of our favorite ideas [for] 2022,” Ives opined.

“Based on our recent checks and customer conversations we have increased confidence in the Matterport growth story… as the company’s free to paid conversion model and further penetration of the real estate vertical remains near-term keys to a stepped-up growth story looking ahead,” the analyst added.

Given all of the above, Ives has high hopes. Along with an Outperform (i.e. Buy) rating, he gives the stock a $38 price target. This target puts the upside potential at ~109%. (To watch Ives’ track record, click here)

Ives may be right that Matterport has slipped ‘under the radar.’ The stock only has 3 analyst reviews on record. They all agree, however, that it’s a Buy proposition, making the Strong Buy consensus rating unanimous. Shares are trading for $20.64, and their $32.33 average price target suggests a one-year upside of 56%. (See MTTR stock analysis on TipRanks) 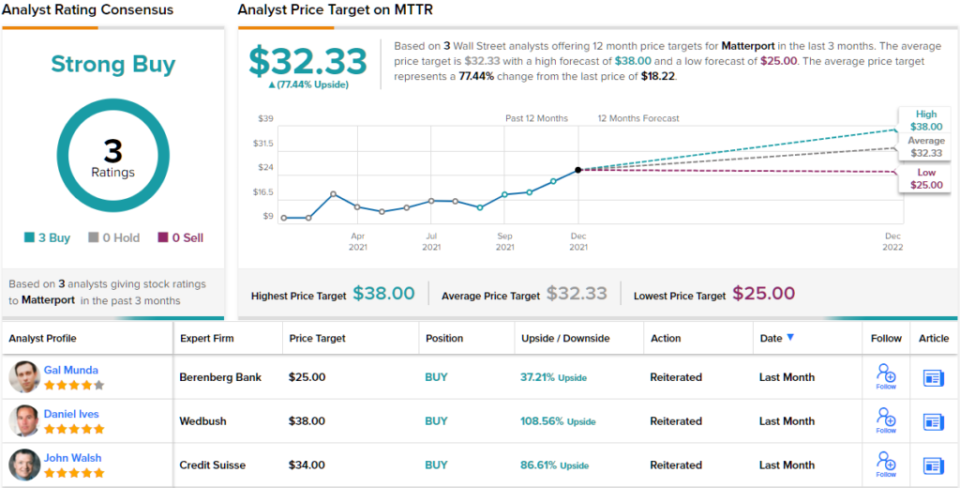 The next stock on today’s list is Nvidia, a well-known name in the semiconductor chip industry. The metaverse won’t be possible without computer power, and Nvidia has built a reputation as a leader in memory chips and graphics processors, both for professional markets and the gaming industry. The company’s reputation has pushed it to the forefront of its industry, and Nvidia was the eighth largest among all semiconductor companies, by sales, in 2020.

A look at the numbers tells the story. Nvidia saw $16.68 billion in total sales in 2020, the last full year for which data are available, with $11.68 billion of that in the first three quarters. In the first three quarters of 2021, the company’s sales totaled $19.27 billion. It’s an impressive performance, powered by six quarters in a row of sequential revenue gains. The company’s earnings show a similar pattern. EPS came in at $1.17 in Q3, up 13% sequentially and 60% year-over-year.

For metaverse-minded digital world builders, Nvidia has the ‘Omniverse,’ an open-source digital world-building tool built on Pixar’s open Universal Scene Description (USD) technology. The similarity in the names may or may not be coincidental – what is certain is that Nvidia’s Omniverse aims to monetize the creation of digital realms, and bring that revenue to the company. It’s one more step on the way to the creation of a full metaverse, and one more example of how the big digital companies are planning to cash in.

Wells Fargo analyst Aaron Rakers, who is rated 5-stars by TipRanks, sees the Omniverse as the key story going forward for Nvidia.

“We estimate that the Metaverse could equate to a $10B incremental market opportunity for NVIDIA over the next 5 years. NVIDIA has outlined a TAM of ~20 million designers and engineers that could benefit from Omniverse adoption today,” Rakers noted.

Turning to the company’s own numbers on Omniverse use, Rakers notes that Nvidia is seeing good signs of early adoption: “NVDA now has >700 enterprise customers evaluating Omniverse vs. previously reporting +500 enterprises; reit. recent disclosure of +70,000 downloads since Dec ’20 launch. As we think about NVDA’s progression of a recurring subscription rev. stream, we continue to believe deferred rev. / RPO growth should be considered the leading indicator.”

In line with these comments, Rakers rates NVDA shares as Overweight (i.e. Buy), with a $370 price target to suggest a 26% one-year upside. (To watch Rakers’ track record, click here)

Overall, Wall Street is in broad agreement that Nvidia is a stock to buy. The shares have 26 recent reviews, including 24 Buys and just 2 Holds, supporting the Strong Buy analyst consensus rating. NVDA’s average price target of $360.17 implies an upside of ~23% in the next 12 months, from the current share price of $292.9. (See NVDA stock analysis on TipRanks) 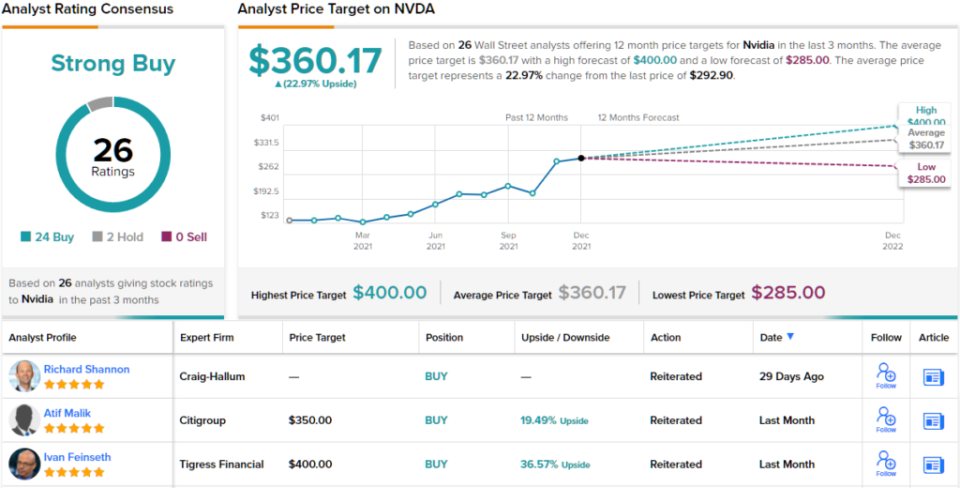 Some companies will find themselves well-prepared to meet the technical demands of the metaverse. Unity Software is one of these. Unity is known for its game-construction applications; the company makes software platforms that enable RPG creators to build gaming spaces in real time, and in 3D. And not just online game builders – Unity’s software and software platforms have applications in industrial design, architecture, films. The systems are compatible with AR and VR devices, both as user and designer interfaces. In fact, it sounds a lot like the metaverse already.

The metaverse’s success will be based on a combination of user experience and creators’ ability to monetize the applications. These are the exact areas where Unity works already, and the company has ridden them to early successes of its own.

The most recent quarterly report, for 3Q21, showed $286.3 million at the top line, up 43% year-over-year. Earnings came in at a 6-cent per share loss, deeper than the 2-cent loss of the previous quarter but improved from the 9-cent loss recorded in 3Q20. The results were widely interpreted as showing clear momentum for the company going forward.

In one last burst of positive news for Unity, the company announced in December the completion of its acquisition deal with Weta Digital. The merger brings Weta’s tools, pipeline, tech, and talent into Unity’s fold, giving a boost to Unity’s already-strong digital creation platforms. The merger is a cash-and-stock deal, worth a total of $1.65 billion.

In a detailed note for D.A. Davidson, analyst Franco Granda sees the Weta merger as the leading point in Unity’s story, writing, “Weta adds leading visual effects technology and talent to greatly deepen Unity Engine’s capabilities, adding $10B to the TAM in the process. Unity also continues to seed the market with interesting new offerings of their own built on impressive technologies, improving the growth profile and solidifying its market leading position. It is all about building the best RT3D platform. U continues to be one of our favorite names as an established leader in gaming and key enabler to the metaverse.”

These comments support Granda’s Buy rating on Unity shares, while the analyst’s $190 price target indicates room for ~46% upside in the 12 months ahead. (To watch Granda’s track record, click here)

Once again, we’re looking at a stock with a Strong Buy consensus rating from the Street. U shares have 10 reviews, breaking down 8 to 2 in favor of the Buys over the Holds. The stock is trading for $129.73 and its average target of $180.25 suggests it has room to run 39% this year. (See Unity’s stock analysis on TipRanks) 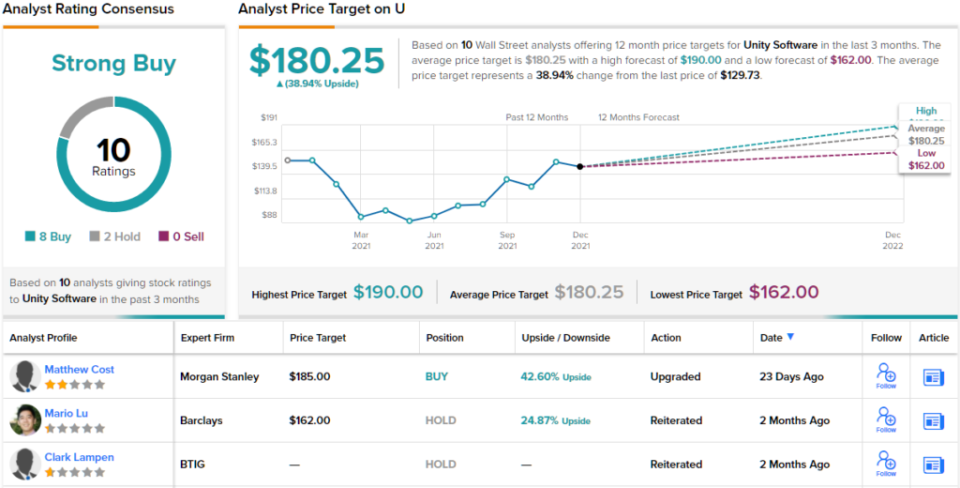 3 attractive income stocks yielding as high as 8.7% — with inflation at 40-year highs, this trio can help strengthen your dwindling purchasing power