Recent events, particularly the reversal of the long-standing Roe v. Wade decision that guaranteed women’s right to have an abortion, have put women’s health matters squarely in the spotlight. It also opens up an opportunity for biomed firms involved in the fields of reproductive health and contraception.

So today we’ll look at two stocks closely tied to the contraceptive business – to the research and marketing of new methods. But that’s not all, according to TipRanks database, these are stocks that are getting the thumbs up from the Wall Street analysts in the form of Buy ratings. Let’s dive in and see what the analysts have to say about them.

Femasys starts by noting that the most commonly used permanent method, tubal ligation, requires a surgical procedure. The company’s FemBloc method is designed for application as an outpatient procedure in the doctor’s office, making it easier on the patient. The procedure delivers a biopolymer to the opening of the patient’s Fallopian tubes, encouraging scar tissue growth that will permanently block both the fertilization of egg cells and the movement of egg cells to the womb. The procedure is followed up through ultrasound imaging about 3 months after application to judge the success of the blockage.

The FemBloc system and procedure are currently undergoing clinical trials, and Femasys has initiated a phase 2 study. This trial is expected to complete enrollment in 3Q22. Earlier trials of FemBloc showed that it was well-tolerated by patients, and considered easier and less painful than surgical options. Femasys is on track to file an investigational device exemption (IDE) to allow a pivotal trial later this year; that will precede a premarket approval (PMA) filing with the FDA, tentatively set for 1Q23.

These facts lie behind Maxim analyst Jason McCarthy’s optimistic view of the company. He writes, “FemBloc represents the only non-surgical permanent birth control solution in development, with significant advantages over the only existing option, tubal ligation surgery… Unlike with Essure, FemBloc does not involve a permanent implant, and thus can limit long-term adverse events and provide improved safety profile. The procedure also limits risks associated with the tubal ligation procedure, as it does not involve surgery…”

To this end, McCarthy rates FEMY a Buy, while his $5 target price suggests a one-year upside potential of ~96%. (To watch McCarthy’s track record, click here)

Overall, it’s clear that Wall Street is sanguine about this small biomed research company; Femasys has 3 recent analyst reviews on file and all are to Buy, making the consensus rating a Strong Buy. The shares are priced at just $2.57 and their $9.33 average target indicates potential for a robust 263% gain in the next 12 months. (See FEMY stock forecast on TipRanks) 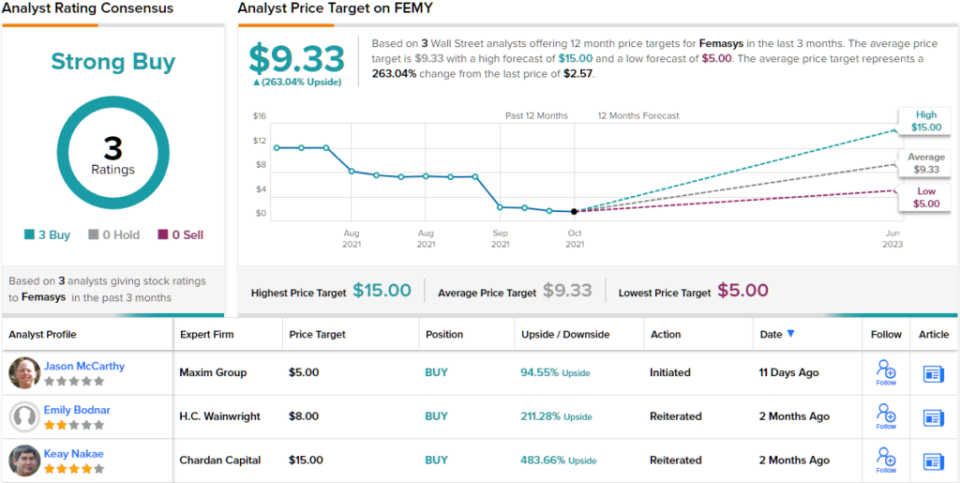 Designed for use at the woman’s convenience, with application up to an hour before anticipated sexual activity, Phexxi works by maintaining vaginal pH levels at their normal range – which is inimical to proper sperm mobility. As a non-hormonal contraceptive, Phexxi avoids the side effects mostly commonly associated with available hormonal options, such as depression and mood swings.

In clinical trials before its approval, Phexxi demonstrated up to 93% effectiveness when taken as directed by a healthcare provider, and importantly, remained 86% effective even when users did not properly follow application instructions. A post hoc analysis of data from the AMPOWER phase 3 clinical trial, reported in June of this year, showed efficacy as high as 99%.

Phexxi was approved for use in 2020, and Evofem has been marketing the product ever since. In 1Q22, Phexxi sales increased by 19% from 4Q21, to reach $4.3 million. Year-over-year, that revenue total represented a 290% sales increase. While the company’s earnings remain negative, the net EPS loss has been moderating for the last half-year. Evofem reported a loss from operations of $37.4 million in the quarter ending December 31; the same metric came in at $28.9 million for the quarter ending in March of this year.

All of this has attracted attention from Laidlaw analyst Yale Jen, who believes Phexxi’s sales are likely to take off in 2022 and beyond.

“Our key investment thesis and potential major upside for investors is that the Phexxi revenue is expected to grow much more substantially… Novel and highly differentiated contraceptive, Phexxi has significant market potential, and could be realized starting in 2022 based on positive current revenue trends, bullish 2022 $30-35MM sale guidance, and several favorable factors,” Jen opined.

The projection amongst Jen’s colleagues is for plenty of upside, too. Shares are currently priced at $1.07 and their $2.63 average target suggests growth of ~146% this year. Overall, the stock has a Moderate Buy consensus rating, based on 3 Buys and 1 Sell. (See EVFM stock forecast on TipRanks) 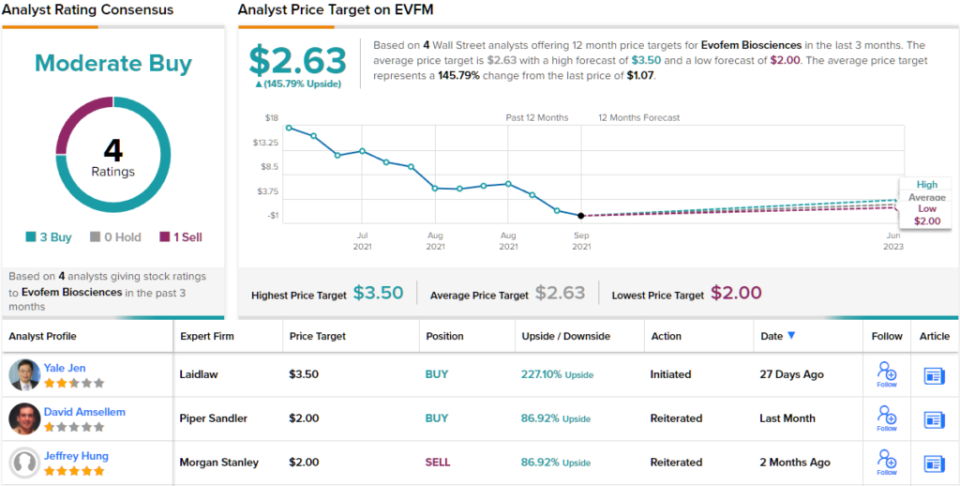 How can I generate some steady income in this volatile market? Here are 3 top-rated stocks yielding up to 7.5% (with fat upside to boot)

6 Software Stocks to Buy and 4 to Sell, According to an Analyst

The Climate Bill Is About to Reshape Global Energy. Here’s How to Invest.